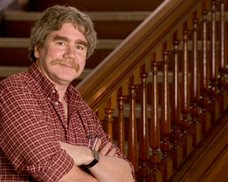 Tracy Daugherty‘s new biography of Donald Barthelme, Hiding Man, has been getting lots of attention. Tracy teaches at Oregon State University in Corvallis, and was a student of Barthelme’s in Texas in the 1980’s. In this week’s New Yorker, Louis Menand writes, “One of the aims of Tracy Daugherty’s excellent biography is to establish that Barthelme was emphatically a postmodernist in the first sense.” The book was also reviewed earlier this month in The Washington Post, where Steven Moore says: ” The last time Daugherty saw him, six months before he died, his former teacher gave him a new assignment: “Write a story about a genius.” He did, and I’d give it an A.”

In his review of the book in this Sunday’s Oregonian, Marc Covert says, “While critics and fans alike would often call Barthelme’s work “challenging,” in Daugherty’s hands the stories seem not nearly as challenging as they are inviting, and “Hiding Man” may well bring about the unexpected blooming they so richly deserve.”

You can read an excerpt of Hiding Man at the Wall Street Journal.

Another Oregon writer, Miriam Gershow, recently published her first novel,The Local News, which was recently reviewed in The New York Times. The review says the novel “is full of insightful, implicit hindsight.” For some unfathomable reason, the reviewer also saw fit to include comments on Miriam’s online teacher ratings in her review. The relevance of online student ratings to a review of the book is not quite clear. The Local News was also reviewed in this Sunday’s Oregonian, where Monica Drake wisely limited her review to the content of the novel.

Miriam lives in Eugene and was a 2006 Oregon Literary Fellowships recipient. She will be reading at Powell’s Books on Hawthorne on Thursday at 7:30 p.m.