It’s high time to enjoy some leisurely reading. Here’s what our staff has been reading this summer:

Sudden Death by Álvaro Enrigue (recommended by Amanda Bullock):
Álvaro Enrigue’s Sudden Death juxtaposes a handful of vividly imagined sixteenth-century episodes: In the Old World, a tennis match between the painter Caravaggio and the Spanish poet Quevedo takes place and Anne Boleyn’s executioner peddles three tennis balls made of the hair from her beheaded braids; in the New World, conquistador Hernán Cortés and his Mayan concubine/translator conspire to defeat the Aztecs, and a native craftsman crafts a spell-binding mantle for a corrupt Counter-Reformation papacy in a remote colony striving to embody Utopia . But I wouldn’t call Sudden Death historical fiction, as Enrique is clearly preoccupied with the now. All this action is interspersed with messages from a narrator named Álvaro Enrique and considerations of how these various clashes of empire echo today. That sounds very serious, but Sudden Death is also a very fun read and unlike any other book I’ve read.

Homegoing by Yaa Gyasi (recommended by Megan Gex):
In 2009, I spent a summer as a reporting intern at a newspaper in Accra, Ghana. When I caught wind of this book, I immediately reserved a copy at the library for a literary quest back to my beloved coastal country. In her debut novel, 26-year-old author Yaa Gyasi takes on the heavy task of recounting 300 years of Ghanian and American history through the lives of two half sisters. The intoxicating first half of the novel transported me back inside the dank walls of Cape Coast Castle where the sisters’ paths diverge—one leading to slavery in America, and the other remaining in West Africa as the wife of a British slave trader.

The Soul of An Octopus by Sy Montgomery (recommended by Susan Moore): I kept noticing this book at Powell’s and decided to take the plunge. I was not very far into it before I  started longing to rub an octopus on its head, which is surely a testament to Montgomery’s masterful writing, rather than some weird character flaw on my part.  So far I’ve learned that octopuses only live 3-4 years, they taste with their tentacles and they are highly skilled at escaping their tanks. The book is also an interesting consideration of what it means to have consciousness.

Telegraph Avenue by Michael Chabon (recommended by Andrew Proctor):
The book’s exuberant prose remind me of the best of Pynchon’s novels.  A strain of nerdy pop culture infuses all of Chabon’s novels, and in this one deep jazz geekdom is at play.  In the hands of a lesser novelist, this can all seem gratuitous, but here, like his other books, it feels essential and adds a lot of fun to the reading.  At its center, the book is about gentrificiation and race, which are issues that are so important to our community right now, but the novel does not feel heavy handed — Chabon’s approach, voice, and perspective feel utterly unique here.

Man & Wife by Katie Chase (recommended by Mary Rechner):
In the mood for precise sentences, sly humor and provocative premises that make the familiar strange? Find it in Katie Chase’s debut collection of award-winning stories Man & Wife. Each story creates a world and ecosystem—the people are just like us, only different and more interesting. I had the pleasure of asking Chase about her stories and writing life in Emotional Currents for Propeller Magazine. 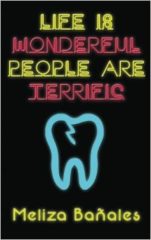 Life is Wonderful People are Terrific by Meliza Bañales (recommended by Mel Wells):
This gritty novel about a queer young Xicana punk navigating the mid-nineties Riot Grrrl scene in Santa Cruz is intense, profane, and will fully transport you to a perspective that is hard to find in mainstream literature. This book was a Lambda Literary finalist and is one of the best coming-of-age novels I’ve read. It’s also published locally by Ladybox Books, whose boxes of limited edition handmade chapbooks and zines sell out quickly; I’m keeping an eye out for the next one!