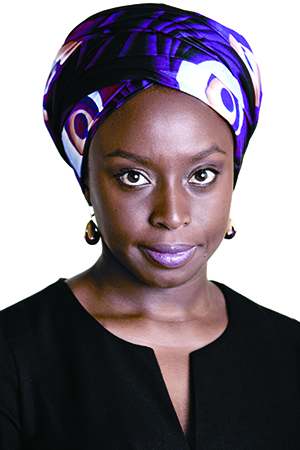 The Orange Prize-winner speaks about her drive to write, living in Chinua Achebe’s house, and why fiction matters.

Chimamanda Adichie opens her lecture by discussing her childhood as a voracious reader in Nigeria, specifically her experience of reading about and wanting an American “ba-gelle” and her eventual disappointment in discovering these were “really just a dense doughnut.” Her life as a reader and writer brings her “extravagant joy,” and she talks about her rituals, progress, and occasional struggles with balancing creativity and socializing. She also touches on living in Chinua Achebe’s house, and how the Nigeria-Biafra War affected her family and influenced her book, Half of a Yellow Sun. She examines her readers’ reactions to her topics, her tendency to be drawn to “a kind of beautiful sadness” in her storytelling, and her delight and surprise when she discovered that her book was a favorite of a woman she did not know and who was not Nigerian, but who found Adichie’s book an immense comfort during a hard time in her life. “Reading that, I felt so moved, and I remember thinking, ‘Fiction does matter.’”

Chimamanda Ngozi Adichie grew up in Nigeria. Her work has been translated into 30 languages and has appeared in various publications, including The New Yorker, Granta, The O. Henry Prize Stories, the Financial Times, and Zoetrope. She is the author of the novel Purple Hibiscus, which won the Commonwealth Writers’ Prize and the Hurston/Wright Legacy Award; the novel Half of a Yellow Sun, which won the Orange Prize, was a National Book Critics Circle Award Finalist, a New York Times Notable Book, and a People and Black Issues Book Review Best Book of the Year; and the short story collection The Thing Around Your Neck. Her latest novel, Americanah, was published in 2013 and has received numerous accolades, including winning the National Book Critics Circle Award for Fiction and The Chicago Tribune Heartland Prize for Fiction and being named one of The New York Times’ 10 Best Books of the Year. A recipient of a MacArthur Foundation Fellowship, Chimamanda divides her time between the United States and Nigeria.

To write realistic fiction as I do is, I think, to try and make sense of the world by storytelling, by streamlining the chaotic nature of life into some sort of narrative with emotive points, and hopefully by doing that, we remind ourselves what it means to be human.”