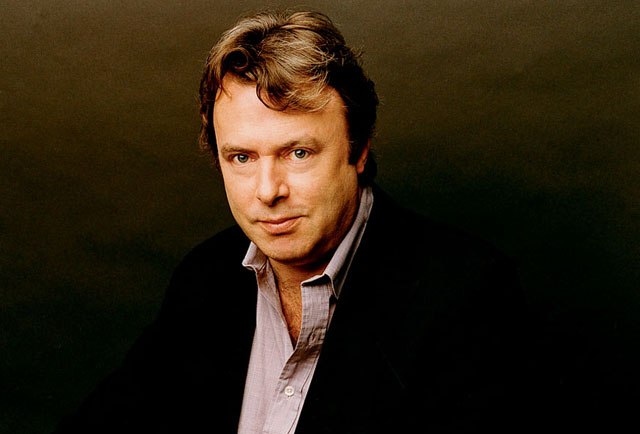 With his signature humor and intellect, Hitchens challenges his audience to consider the themes of his bestseller God is Not Great.

With his signature humor and intellect, Hitchens begins by asking his audience to consider whether morality is innately human or divinely imposed, citing examples of people committing horrific crimes in the name of religion. He denounces the moral relativism of religions and argues that atheists also have strong moral convictions and high principles. His intellectual commentary continues along the lines of his bestselling book, God is Not Great, as he argues that the mythology of religions is not only absurd but, in many instances, destructive. For Hitchens, the beauty and miracle of life in the universe is even more pronounced when it isn’t attributed to and ruled by a “celestial dictatorship.”

Everything we’re made of—cheer up, we’re not just materialists here—everything we’re made of is stardust. You don’t have to despair and become a bored old morose materialist. You still have irony. You still have music, love, sex, landscape, Chinese food, philosophy—which is much more consoling than mere incantation—and you still have the sense of wonder that comes from the extraordinary beauty and symmetry of the universe, and the wonderful kinship that we’re beginning to find out that we also have through our genome.”

“What is claimed by religion is the power to bind and to loose, to save or to condemn—to offer real salvation, to make the promise of paradise or the threat of hell. A great deal rests on it. The religious are claiming to know more than, in my opinion, any primate or mammal can possibly know.”

“I’m sometimes grouped with a tendency or a faction called the new atheists. There’s nothing particularly new about what we say.”

“But for the idea that we are not allowed to know any of this, without divine permission, that it only comes to us as a gift, that we are mere passive recipients of wisdom and that without submission to this celestial dictatorship we wouldn’t even know how to behave well to one another—I think it’s time to go a bit beyond ridicule and beyond indignation and to say very staunchly that we will resist that and that we will enforce and protect our constitution and its patrolling of the frontier between church and state and its liberty of conscience and its long record of people who have been willing to die to uphold, that as I try and put it, ‘Mr. Jefferson, on that wall of separation, build up that wall!’”

Christopher Hitchens was born in Portsmouth, England in 1949. He attended Oxford and was the first person in his family to go to a university. He moved to the United States in 1981, where he wrote for The Statesman and met Martin Amis, Julian Barnes, and James Fenton. Hitchens has said, “They persuaded me that it wasn’t enough just to make the point; that style was substance, and that there was something in language itself.” Hitchens also wrote for The Nation, Vanity Fair, and Slate.

Hitchens was the author, co-author, editor, and co-editor of over thirty books, including five collections of essays. His own books, several of which were scathing critiques of public figures, include The Monarchy: A Critique of Britain’s Favorite Fetish (1990), The Missionary Position: Mother Teresa in Theory and Practice (1995) and No One Left to Lie To: The Values of the Worst Family (1999). He has a reputation as an outspoken polemicist, and was perhaps best known for his 2008 book, God is Not Great: How Religion Poisons Everything, a finalist for the National Book Award. He was on book tour for his memoir, Hitch-22: Some Confessions and Contradictions, in 2010 when he was diagnosed with esophageal cancer. Hitchens passed away in 2011.