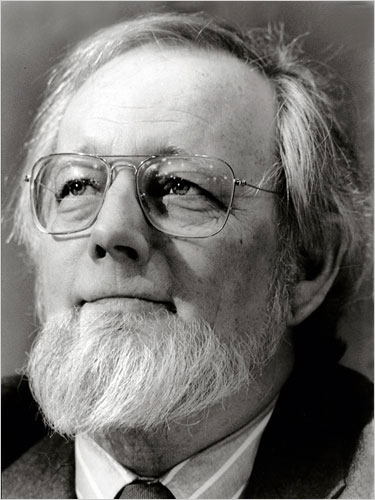 Barthelme begins his lecture with a series of readings, including a story about his family’s quest for a dog, his reflections on being a father, the study of angels, and a conversation with Goethe in which he compares music, art, and nationalities to common day objects. Barthelme also previews a selection of excerpts from his forthcoming novel The King, a retelling of Le Morte D’Arthur through the lens of World War II, which he had not yet decided on a title for and which was posthumously published in 1990. He returns to the short story form following this, tackling the subject of life in New York and revisiting the subject of parenthood. His Q&A sheds light on some aspects of his personal life, including his life in New York and his own work alongside that of his family.

“You must not confuse the monster in the story with the monster you see before you; they are two different monsters.”

“It seems to me that in the contemporary world we suffer from something called information sickness; that is, the point is to push away experience, much of it unwanted vicarious experience and much of it synthetic and contrived by other people to manipulate us. If I thought there was any authentic experience to experience, I would probably recommend that—but I’ve seen very little of it.”

Short story writer and novelist Donald Barthelme is considered one the most important American writers of the 20th century and critical to the post-modern school of writing that includes John Barth, John Hawkes, William Gass, Robert Coover, and Thomas Pynchon. His writings are known for their technical experimentation and melancholy gaiety. He first rose to national prominence when his debut novel, Snow White, was printed in its entirety in The New Yorker, taking up virtually the entire issue. He later received the National Book Award for his 1972 children’s book, The Slightly Irregular Fire Engine or the Hithering Thithering Djinn.