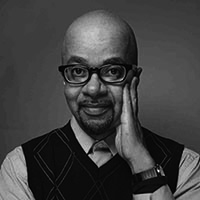 James McBride illustrates the inspiration behind his award-winning books and his infamous jazz career. "My books are one of my few successes," he said. "I fail all the time and just forget it."

In an off-the-cuff lecture, McBride strolls through his childhood in a busy household of twelve to his time at Oberlin College as an undergrad and Columbia as a budding journalist. His vibrant writing career placed him at People magazine, where his sole job was to cover Michael Jackson. Later, he moved on to The Boston Globe and The Washington Post. McBride explains why he left the journalism world to tour the country as a professional musician and composer for nearly eight years. During this time he began to revisit his roots and write about his mother, a venture that turned into his first novel The Color of Water: A Black Man’s Tribute to His White Mother. During his lecture, McBride weaves in his opinion on racial issues in America’s past and present, leading to share his inspiration for researching John Brown, the hero of his latest novel The Good Lord Bird.

James McBride grew up in Brooklyn and Queens, New York. He has a Bachelor’s degree in Music Composition and a Master’s degree in Journalism from Columbia University. He has worked as a staff writer for People, The Boston Globe, and The Washington Post before quitting his writing career to spend eight years as a professional musician and composer. His first book, The Color of Water, is a memoir in which the narrative alternates between his own story and exploration of his racial identity and his white mother’s story. McBride explained that this work took fourteen years to write, as his mother slowly revealed herself to him. The memoir has sold over two million copies and was on The New York Times bestseller list for over two years. He went on to write two more novels, and his third, The Good Lord Bird, won the 2013 National Book Award. McBride holds several honorary doctorates and is Distinguished Writer in Residence at New York University’s Arthur L. Carter Journalism Institute.