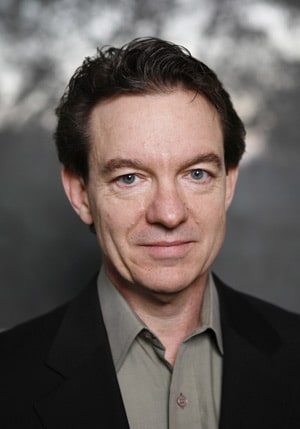 Journalist Lawrence Wright delves into the controversial religion of Scientology, the topic of his Pulitzer Prize-winning book, Going Clear.

Wright begins his lecture by elaborating on his recent journalistic investigation into the history of Scientology and L. Ron Hubbard. Wright seeks to answer two overarching questions: 1) Where do new religious ideas come from? and 2) why would anybody believe them? Although he focuses on Scientology, Wright also emphasizes the fundamental needs that drive people to all organized religions: hope, play, purpose, community, and structure. He credits the unique appeal of Scientology to a potent mixture of therapy, celebrity, and science.

“Perhaps these are all revelations from God, in which case I do wish he’d get his story straight. Or else they are hallucinations, frauds, or products of a diseased imagination. I think in the case of L. Ron Hubbard, we see all three of these factors at work.”

“But new religions will come along, whether Scientology exists or not; they always do, especially in America where you can believe anything you want. And if you don’t find a belief you like from the smorgasbord of beliefs that are laid out before you, you can create your own.”

Lawrence Wright is an author, screenwriter, and playwright. After graduating from Tulane University in New Orleans, Wright completed his M.A. in Applied Linguistics in Cairo. He then pursued a career in journalism, writing for publications such as Rolling Stone and The New Yorker, for whom he has been a staff writer for two decades. He is the author of one novel and eight nonfiction books, including The Looming Tower: Al-Qaeda and the Road to 9/11, which won the Pulitzer Prize for General Nonfiction, and Going Clear: Scientology, Hollywood, and the Prison of Belief, which was nominated for the National Book Award and shortlisted for the National Book Critics Circle Award. Wright is the co-writer of The Siege (1998), starring Denzel Washington, Bruce Willis, and Annette Bening. His one-man play, “My Trip to Al-Qaeda,” was adapted into an HBO documentary film directed by Academy Award winner Alex Gibney. In addition to his writing career, Wright is a member of the Council on Foreign Relations and the keyboard player for the Austin-based blues band WhoDo. He is currently writing a series for HBO called God Save Texas.