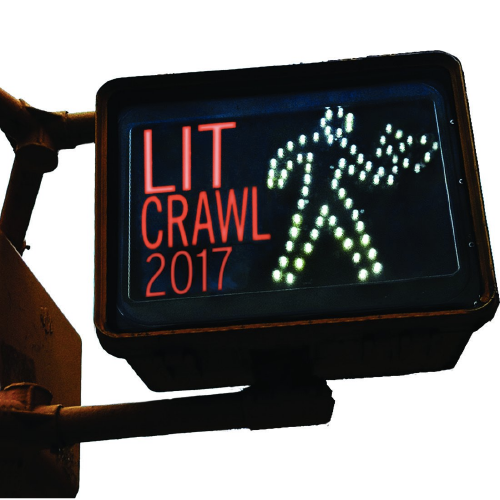 This special episode of The Archive Project features highlights from Lit Crawl Portland 2017. Authors featured in this episode include poets Nabila Lovelace, Alyssa Ogi, Danez Smith, and Mahogany Browne; Oregon Book Award finalist Elena Passarello; and Deb Olin Unferth and Elizabeth Haidle, co-authors of the graphic novel I, Parrot. This episode is broken up into three segments, each corresponding to a single Lit Crawl event.

This special episode of The Archive Project is broken up into three sections, each corresponding to a single event during Lit Crawl Portland 2017. Lit Crawl is an eclectic mix of literary events staged in nontraditional locations. From poetry readings in bars to literary trivia and karaoke in hotel lobbies, Lit Crawl seeks to unite readers and writers in a single night jam-packed with literary fun. The first segment features a reading cohosted by De-Canon: A Visibility Project, White Noise, and YesYes Books, and showcasing poets Nabila Lovelace, Alyssa Ogi, Danez Smith, and Mahogany Browne. In the second segment, Elena Passarello reads from and discusses her essay on Twin Peaks nostalgia in the anthology Little Boxes: Twelve Writers on Television. And in the final segment, Deb Olin Unferth and Elizabeth Haidle discuss the near symbiotic process that produced their darkly humorous graphic novel I, Parrot.

Nabila Lovelace is a born and raised Queens native, as well as a first generation American. Her work has been published or is forthcoming in Washington Square Review, Day One, Winter Tangerine Hands Up Don’t Shoot edition.

Alyssa Ogi writes and teaches in Portland, OR. She received her MFA from the University of Oregon, and her recent poetry can be found in Best New Poets 2017, Crab Orchard Review, and other journals.

Danez Smith is a Black, queer, poz writer & performer from St. Paul, MN. Danez is the author of Don’t Call Us Dead, a finalist for the National Book Award, and [insert] boy, winner of the Kate Tufts Discovery Award & the Lambda Literary Award for Gay Poetry.

Elena Passarello is an actor, writer, and recipient of a 2015 Whiting Award. Her essays on performance, pop culture, and the natural world have been published in Oxford American, Slate, Creative Nonfiction, and The Iowa Review, among other publications.

Deb Olin Unferth is the author of four books, including Wait Till You See Me Dance and Revolution, a finalist for the National Book Critics Circle Award. Her fiction has appeared in Harper’s Magazine, The Paris Review, Granta, and Tin House.

Elizabeth Haidle is a freelance artist based in Portland, Oregon. She is the creative director and regular contributor at Illustoria magazine, while writing and illustrating a nonfiction graphic novel series and raising her teenage son.