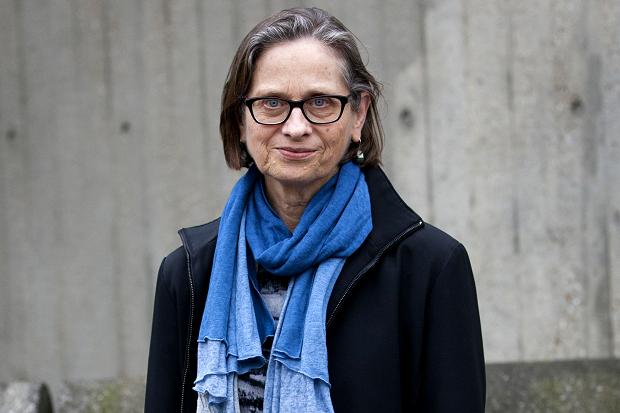 In this episode of The Archive Project, Lydia Davis discusses the short story form, the task of translation, and the complaint letter as literature.

Lydia Davis begins her lecture by explaining her attempt to find a balance between poetry and prose through writing short stories. She discusses several of her favorite authors—including Samuel Beckett, Russell Edson, and Bob Pearlman—and reads short selections from their works. Davis also discusses her work translating Proust and Flaubert, among others. She then reads from a New York poet named Sparrow who writes minimalistic translations, compares his translations to the originals, and asks whether or not one can write the same thing in radically different ways or if it is indeed the same thing at all. Davis goes on to talk about letters of complaint she wrote that became “too literary to send,” and reads one addressed to a frozen peas manufacturer where she criticizes the poor aesthetics of the packaging and her concern that the business will suffer.

A good poem almost always offers you something surprising in the language and the way of thinking.”

“The way that we read a piece of writing is determined by the context in which we read it.”

“I wrote poems early on, but to be a poet somehow was not a serious option for life. So if eventually some of my work comes right up to the line—if there is one—that separates a piece of prose from a poem…the approach to that line is through the realm of short fiction.”

Lydia Davis is the author of one novel and seven story collections. Her collection Varieties of Disturbance: Stories was a finalist for the 2007 National Book Award. She is the recipient of a MacArthur fellowship, the American Academy of Arts and Letters’ Award of Merit Medal, and was named a Chevalier of the Order of the Arts and Letters by the French government for her fiction and her translations of modern writers, including Maurice Blanchot, Michel Leiris, and Marcel Proust. Davis is the winner of the 2013 Man Booker International Prize. (Biography courtesy of Macmillan.)