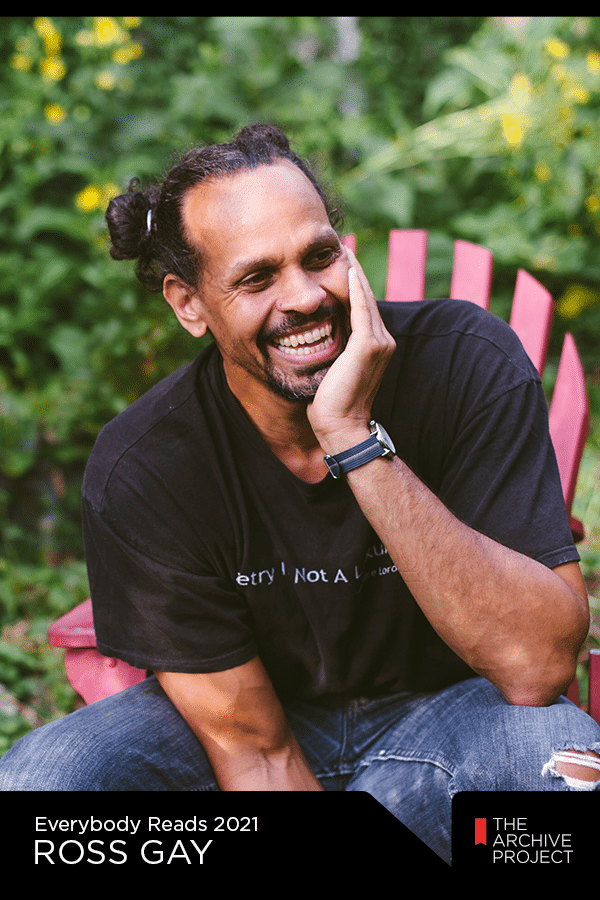 Ross Gay shares his non-linear journey to becoming a poet, and the inspiration behind his essay collection The Book of Delights.

In this episode, we bring you writer Ross Gay, author of The Book of Delights. We hosted Gay in the culminating event of Multnomah County Library’s 2021 Everybody Reads program—an annual shared reading experience that includes city-wide events for readers of all ages. This year, because of the public health restrictions, we brought Ross Gay to Portland virtually. He gave an incredible lecture and then engaged in a thoughtful, funny, and heartfelt conversation with Oregon-based writer Lidia Yuknavitch.

In his talk, Ross Gay takes us back to his hardscrabble childhood in Philadelphia and traces his coming-of-age story from newspaper boy to internationally recognized poet and writer. The Book of Delights, an essay collection, contains “essayettes,” as Gay refers to them, written over one year, recording the small joys of life: Nicknames, being called “baby” by a waitress, birds in the Detroit airport, writing by hand. And as he catalogs his delight, Gay does not avoid the harshness and unfairness that accompanies life in twenty-first century America, including racism, grief, climate disaster, and more. But Gay shows us that it is possible to notice delight amid grief and upheaval, and how this delight connects us, not only to the world around us, be to each other.

Ross Gay is the author of four books of poetry: Against Which; Bringing the Shovel Down; Be Holding; and Catalog of Unabashed Gratitude, winner of the 2015 National Book Critics Circle Award and the 2016 Kingsley Tufts Poetry Award. His collection of essays, The Book of Delights, was released by Algonquin Books in 2019. Gay is also the co-author, with Aimee Nezhukumatathil, of the chapbook “Lace and Pyrite: Letters from Two Gardens,” in addition to being co-author, with Rosechard Wehrenberg, of the chapbook, “River.”  He is a founding editor, with Karissa Chen and Patrick Rosal, of the online sports magazine Some Call it Ballin’, in addition to being an editor with the chapbook presses Q Avenue and Ledge Mule Press. Ross is a founding board member of the Bloomington Community Orchard, a non-profit, free-fruit-for-all food justice and joy project. He also works on The Tenderness Project with Shayla Lawson and Essence London. He has received fellowships from Cave Canem, the Bread Loaf Writer’s Conference, and the Guggenheim Foundation. Ross teaches at Indiana University.

Lidia Yuknavitch is the nationally bestselling author of the novels The Book of Joan, The Small Backs of Children, Dora: A Headcase, the memoir The Chronology of Water and The Misfit’s Manifesto, based on her TED talk “On the Beauty of Being a Misfit,” which has been viewed over 3.5 million times. She is the recipient of two Oregon Book Awards and a Willamette Writers Award, and has been a finalist for the Brooklyn Public Library Literary Prize and the PEN Center Creative Nonfiction Award. She is the founder of the literary innovation laboratory Corporeal Writing. She lives in Portland, Oregon.