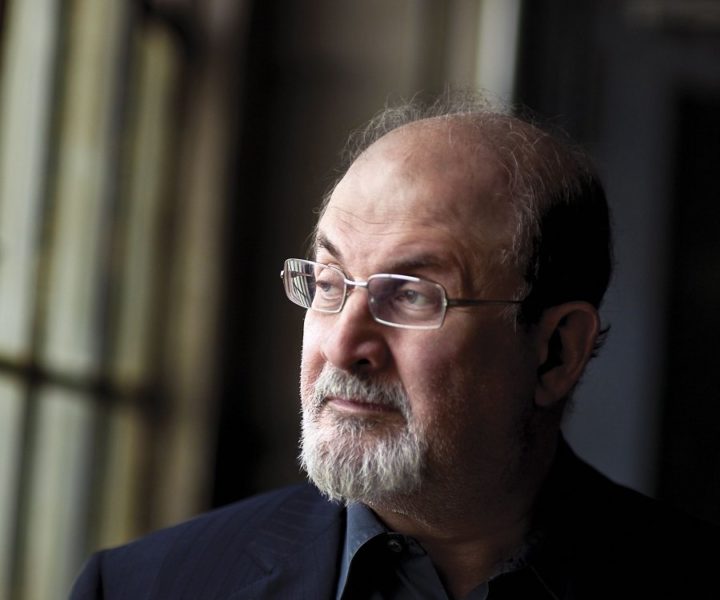 In this episode of The Archive Project, author Salman Rushdie reads from and discusses his 1999 novel, The Ground Beneath Her Feet. Just one year after almost a decade in hiding from the Iranian government, Rushdie makes his first public appearance in Portland, discussing the ideas, both mythical and musical, that inspired this New York Times bestseller.

This episode of The Archive Project features author Salman Rushdie reading from and discussing his 1999 New York Times bestseller The Ground Beneath Her Feet. In his remaking of the myth of Orpheus, Rushdie tells the story of Vina Apsara, a pop star, and Ormus Cama, an extraordinary songwriter and musician, who captivate and change the world through their music and their romance. Beginning in Bombay in the fifties, moving to London in the sixties, and New York for the last quarter century, the novel pulsates with a half-century of music and celebrates the power of rock ‘n’ roll. In this episode, Rushdie discusses the musical and mythological influences that inspired this ambitious work of magical realism. [Book description courtesy of SalmanRushdie.com]

“The thing that I wanted to do most of all was to write a love story. And to find a way of writing a contemporary love story that was neither gushily sentimental nor fashionably cynical, but which could face up to great passion and try and make sense of it. And so, in my usual perverse way, while trying to write a modern story I found myself thinking about an ancient myth.”

Salman Rushdie is the author of several novels, including Grimus, Midnight’s Children, The Satanic Verses, Haroun and the Sea of Stories, The Moor’s Last Sigh, The Ground Beneath Her Feet, Fury, and Shalimar the Clown. He has written collections of short stories, including East, West, and co-edited with Elizabeth West a collection of Indian literature in English, Mirrorwork. He has also published several works of nonfiction, among them The Jaguar Smile, Imaginary Homelands, The Wizard of Oz, and Joseph Anton, a memoir of his life under the fatwa issued after the publication of The Satanic Verses.