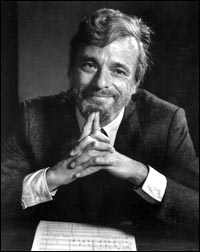 Frank Rich interviews Stephen Sondheim about the evolution of his career, touching on the stories behind his best-known works and their adaptations.

Stephen Sondheim and Frank Rich begin with a discussion of the evolution of Broadway musicals and playwrights—from Rodgers and Hammerstein’s dominance to the modern period of experimentation in musical theater—which Sondheim participated in with gusto. Rich asks about his own start, and Sondheim talks of his work as a young songwriter on West Side Story, learning from greats such as Arthur Laurents, Leonard Bernstein, and Jerome Robbins. Sondheim discloses the difficulties he had with some collaborations and jokes that he prefers not to write any show until it has already been cast and rehearsed. Rich asks him about Sweeney Todd, specifically the way some songs were cut in the film adaptation. Sondheim responds with an analysis of how the audiences for theater and film differ. He then describes his music in depth and tells the stories behind some of his best-known songs.

“There has to be an emotional action in a song. I’ve always had very specific ideas as to what should happen in the number, either physically, or emotionally, or in terms of the other characters.”

“Many songs are just static. I try to write non-static songs.”

“If you’re doing a musical that tells a story through song, then you’ve got to find a way of translating one medium into another.”

Stephen Sondheim is a composer and lyricist who has collaborated on more than a dozen landmark shows (from which have come many standard songs) and who has also been the single most influential force in bringing the Broadway musical into the modern age. Beginning in his twenties, Sondheim contributed the lyrics to two classic collaborations with the playwright Arthur Laurents and the director-choreographer Jerome Robbins: West Side Story (1957; music by Leonard Bernstein) and Gypsy (1959; music by Jule Styne). The first Broadway show he produced as both composer and lyricist, A Funny Thing Happened on the Way to the Forum (1962), had an even longer run than its predecessors. As Sondheim’s lyrics have entered the American language—from “Everything’s Coming Up Roses” to “The Ladies Who Lunch”—so too has his music liberated Broadway from traditional songwriting conventions. It is impossible to find a new musical of artistic ambition today that hasn’t been influenced by his breakthroughs in remaking the rules that once governed the traditional Broadway musical. Many of his musicals have been made into movies, including the Tim Burton-directed adaptation of Sweeney Todd. Sondheim has won every conceivable award, including the Pulitzer Prize, two Grammys, an Oscar, and eight Tonys. He has also won a special award for Lifetime Achievement in the Theater, The Kennedy Center Honors, the MacDowell Medal, the President’s Medal for the Arts, and the Praemium Imperiale (referred to as the “Nobel Prize of the Arts”). (Excerpted from www.barclayagency.com/Sondheim.html)

Frank Rich started as a Times Op-Ed columnist in January 1994. From 1999 to 2003, he was also a senior writer for The New York Times Magazine, a dual title that was a first for The Times. Rich joined New York magazine in June 2011 as writer-at-large, writing monthly on politics and culture and editing a special monthly section anchored by his essay. Among other honors, Mr. Rich received the George Polk Award for commentary in 2005. He has also written The Greatest Story Ever Sold: The Decline and Fall of Truth in Bush’s America (2006), and his drama reviews were collected in Hot Seat: Theater Criticism for The New York Times, 1980-1993. Since 2008, Rich has also been a creative consultant at HBO and is an executive producer of Veep and Six by Sondheim, the Peabody Award-winning documentary about Stephen Sondheim.