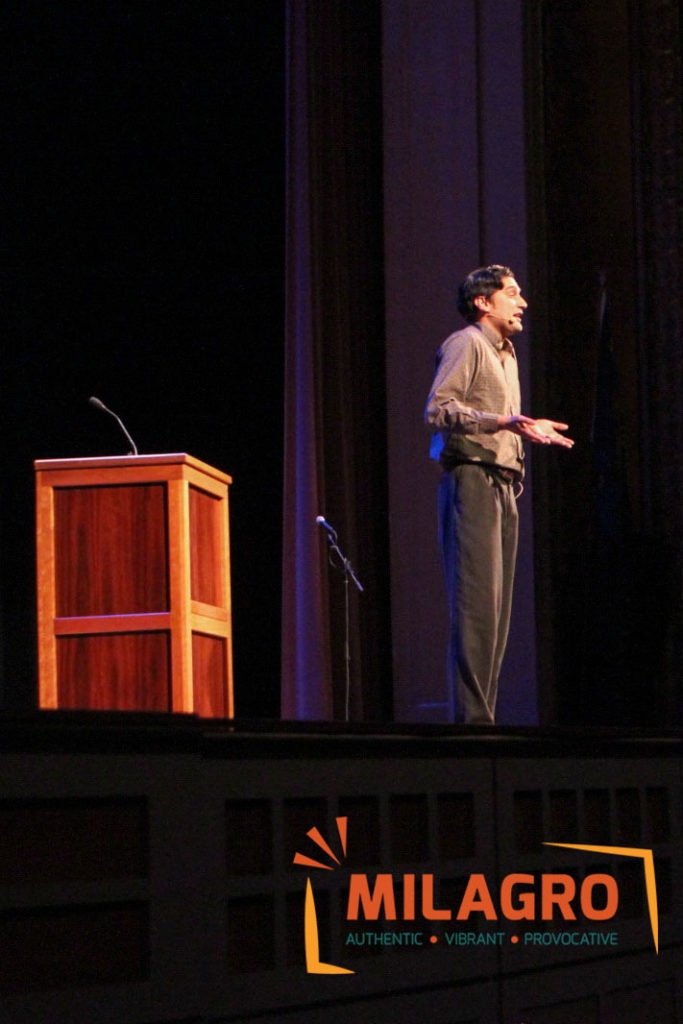 Actors from The Milagro Theatre read from Cristina Henriquez’s The Book of Unknown Americans, Multnomah County Library’s 2016 Everybody Reads selection.

In this episode of The Archive Project, actors from The Milagro Theatre read excerpts from Cristina Henriquez’s The Book of Unknown Americans, Multnomah County Library’s 2016 Everybody Reads selection.

Cristina Henriquez’s The Book of Unknown Americans explores the lives of two families who have come to the United States from Mexico and Panama, as well as the experiences of men and women who have immigrated from all over Latin America, as they pursue different versions of the American Dream. It was recognized as a New York Times Notable Book of 2014, one of The Washington Post’s top 50 fiction books, and an NPR Great Read, among other accolades.

Everybody Reads is a community reading project of Multnomah County Library made possible in part by gifts to The Library Foundation. The Everybody Reads program celebrates the power of books in creating a stronger community through a shared reading experience. In partnership with Multnomah County Library and The Library Foundation, Literary Arts is proud to present Cristina Henríquez at the Arlene Schnitzer Concert Hall as the culminating event of the 14th annual Everybody Reads program on Tuesday, March 8, 2016 at 7:30 p.m.

Back then, all we wanted was the simplest things: to eat good food, to sleep at night, to smile, to laugh, to be well. We felt it was our right, as much as anyone’s, to have those things. Of course, when I think about it now, I see that I was naïve. I was blinded by the swell of hope and the promise of possibility. I assumed that everything that would go wrong in our lives already had.”

“I like it here. I started off as a manager, but now I own this building. Bought it out almost ten years ago after working jobs on the side, saving up. I got a good deal. The area is changing, though. A clash of cultures. I try to make this building like an island for all of us washed-ashore refugees. A safe harbor. I don’t let anyone mess with me. If people want to tell me to go home, I just turn to them and smile politely and say, “I’m already here.”

“Maybe it’s the instinct of every immigrant, born of necessity or of longing. Someplace else will be better than here. And the condition: if only I can get to that place…People do what they have to in this life. We try to get from one end of it to the other with dignity and honor. We do the best we can.”

The mission of the Miracle Theatre Group, aka Milagro, is to provide extraordinary Latino theatre, culture, and arts education experiences for the enrichment of all communities. Since its founding in 1985, Milagro has filled a unique program niche while building a solid reputation. The organization works in three distinct areas: fully mounted productions at El Centro Milagro, with each season presenting a combination of English, Spanish-language, and bilingual performances; Teatro Milagro, the bilingual touring & arts education program; and multilingual community arts programming at home and in the field. Milagro is committed to presenting works that exemplify the Latino experience through a culturally informed lens.

Dañel Malán co-founded the Milagro Theatre with her husband, Jose Eduardo Gonzalez, and in 1989 she created the bilingual touring program, Teatro Milagro, which tours nationally to schools, colleges and universities.

Ajai Terrazas Tripathi is a graduate of Oregon State University with a Bachelor of Arts in Theatre. He is an actor, teaching artist, grant writer, director, playwright, and Tour Manager of Teatro Milagro.

Monica Domena, Adriana & teaching artist, is a graduate of Central Washington University with a Bachelor of Fine Arts. Of Puerto Rican decent, this is Monica’s second season of touring with Teatro Milagro.

Giovanni Alva, Estefano & teaching artist, is a graduate from Humboldt State with a Bachelor in Theatre Arts. He is also an improv actor, originally from San Diego, California.

Shenekah Telles, Josefina & teaching artist, is an actor from Las Cruces, New Mexico with a Bachelor of Arts from the University of Portland. In addition to acting, she brings to Milagro skills in costume and make-up design.