This semester, one of our WITS semester-long residencies features illustrator and cartoonist Jonathan Hill teaching in Norman Stremming’s science fiction class at Franklin High School. On a recent Wednesday morning, the class had their fifth session with Hill, and the ninety-minute class passed quickly for everyone involved. 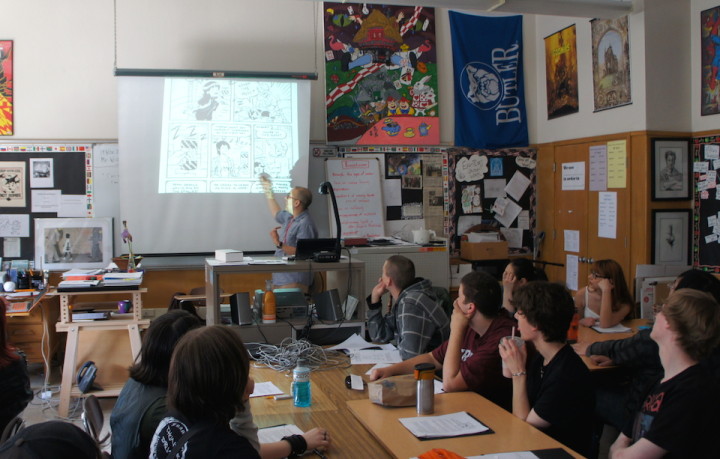 In the previous four sessions, Hill has been focusing on the specific language of comics, and how their elements are used to create a story arc. He also expanded the students’ views of comics, going beyond the action-hero genre and looking at an array of graphic novels. On this specific day, Hill showed examples of his own work on the overhead projector, specifically Americus, explaining how he worked with the author MK Reed to develop the storyline visually. He explained the use of “thumbnails,” or small drafts of panels, to work out a narrative in rough draft form. 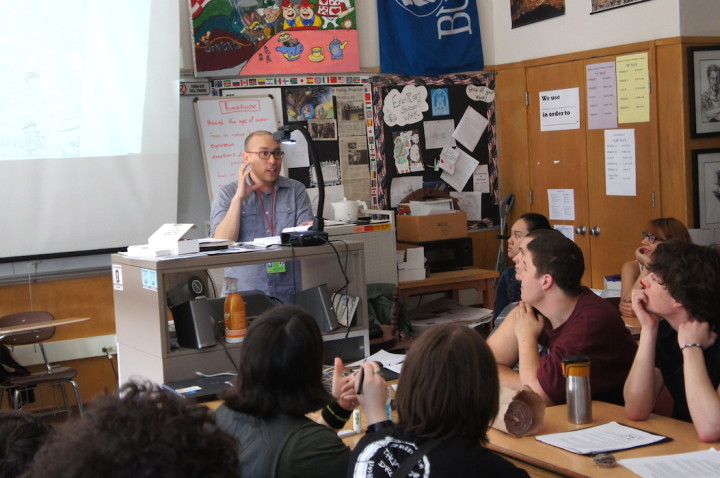 “You can see that, at the beginning, she was giving me huge chunks of text,” said Hill. He talked of the challenges of writing a book with someone he’d never met in person, and how they worked out a balance of images and text as the project continued. Hill’s willingness to open up about his own creative experiences, both good and frustrating, kept students focused and peppering him with questions.

Hill handed out the packets for the day’s activity and students began to work on their own thumbnails. Several flagged him down for help, and he went around the room and answered questions individually. 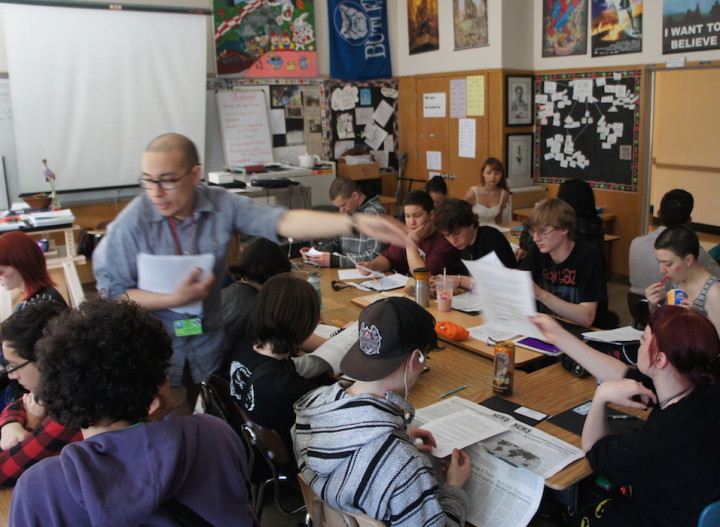 One student had questions about telling the story of his grandfather’s death. “Great storytelling explores the personal,” Hill replied, “and your approach is not cliche. I’m excited to see what you do with it.” 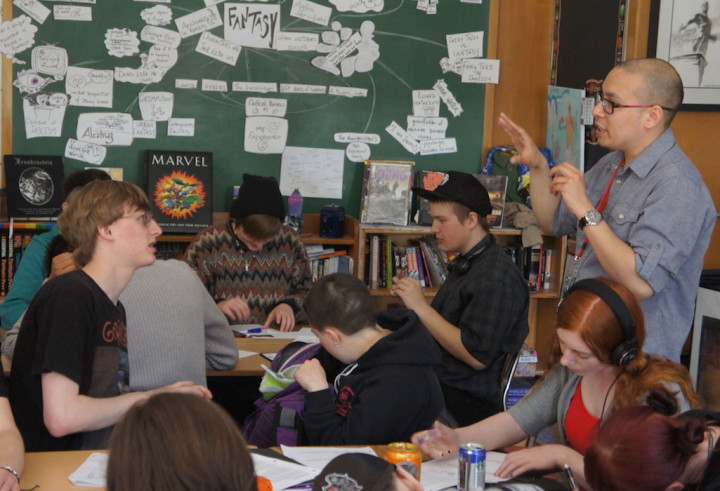 Hill’s enthusiasm for each student’s ideas was palpable and authentic. Most often, he praised their creativity and then helped them craft a narrative arc, emphasizing the need for a beginning, a middle, and an end. 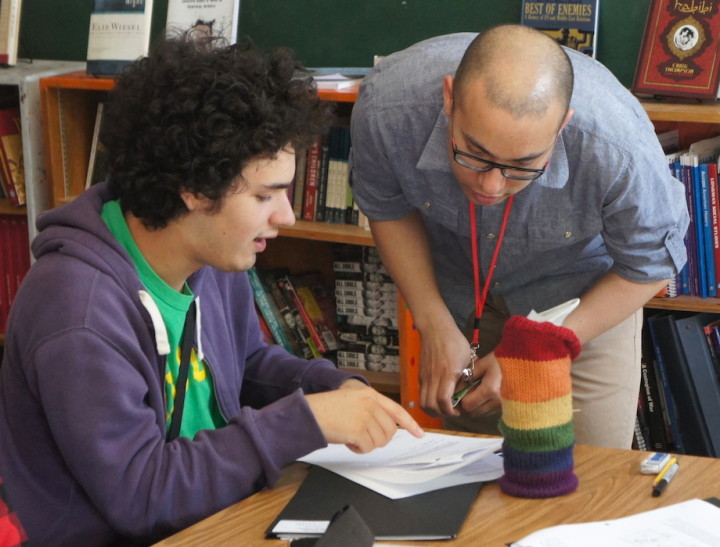 “But what if I’m not good at drawing?” asked one student.

“That’s ok,” replied Hill. “The idea is the most important part.” 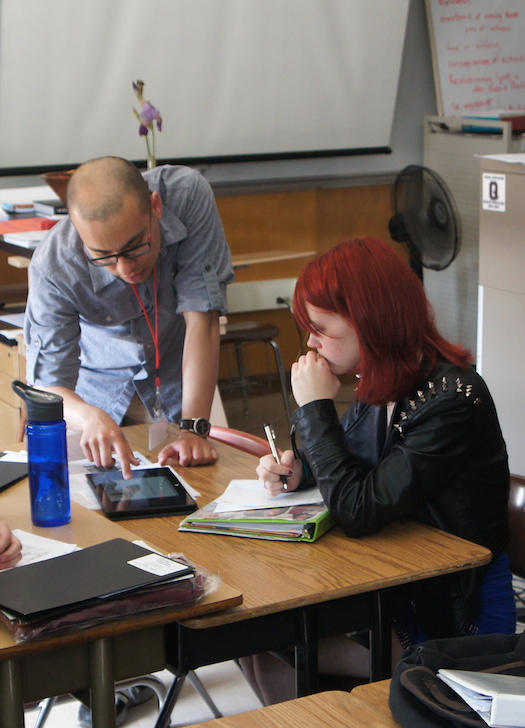 Other students were more confident in their artistic abilities, and Hill helped guide their talent toward good storytelling. “You have a great setting and characters, but what do you want to say?” he prodded one student. The student’s forehead wrinkled, but his mouth turned up in a smile. They batted ideas back and forth for a minute, and then the student bent over the page and began sketching.

Mr. Stremming is integrating Hill’s residency into the final project for the class, where students will write and illustrate an original sci-fi story. We’re excited to see their final projects–perhaps even as excited as Jonathan Hill. Thanks to everyone who helps us make these types of residencies, the core of the Writers in the Schools program, such a vibrant and rewarding experience for the next generation of writers in Portland! 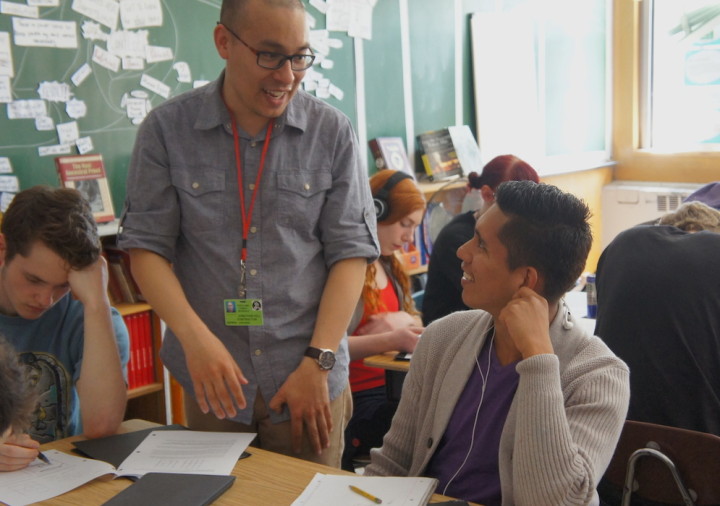