Most of the students had been to Verslandia! before and were excited to represent their school. Janet, an alternate poet from Franklin who has been doing slam since middle school, said the talent blew her away last year. This year two students from each school performed, instead of three, making for an even stronger pool of contestants. Most had been practicing or participating in workshops for the past few months. Alexis Cannard and Rakiyah Perry, both from Roosevelt, had been meeting weekly with their slam team couch since February.

When asked what makes a winning slam performance, the answers were fairly similar. “Delivery is important,” said Rachel Peri, a student at Grant. “But content is what drives the piece. It needs to be personal but also universal.”

Mykia Hernandez, from MLC, agreed. “Everyone at this level is a good performer,” she said. “But how can you get your poem to really resonate with someone? It has to be heartfelt.”

Alex Gerald, a student from Grant who would place in the top five, said that his favorite slam poetry has both flow and emotional honesty. “It’s cool to see and read with so many people who are good,” he said. “I usually get a tingly sensation when a poem is good and at Verselandia! every poem is like that.”

A few performers were at Verselandia! for the first time. “I’m nervous, yes, but most of all I’m honored that I was chosen to perform with these other amazing poets,” said Taylor Salter, an MLC student and lover of def-poetry. Her family, especially the women in her life, inspire her work. “Poetry is personal,” she said. “And slam is about telling your truth.”

At 7:00pm, performing students moved into the green room and their parents, teachers, and friends packed the Gerding Theater. The castle backdrop on stage, for Othello, was the perfect addition to the buzzing ambiance. As was MC Anis Mojgani, a National and International Poetry Slam Champion, TEDx speaker, author of four books, and former WITS teacher. Mojgani first got the audience riled up by explaining the origins of slam (Chicago, thirty years ago, a construction worker named Marc Smith) and invoking the pre-slam call and response ritual (saying “So what?” to Marc’s name).  Then he announced the rules: 1. Each poem must be an original piece by the poet. 2. Poets may not use props, costumes, or musical instruments. 3. Poets may not go more than ten seconds over the time limit.

After introducing judges Turiya Autry, Jessica Mozeico, Ramon Pagan, Desmond Spann, and Bob Speltz, Mojgani called the sacrificial poet, Doc Lubin, to the stage. After Lubin’s performance, student poets were chosen in random order and called to the stage. Each had three minutes to perform. Content-wise, the students slammed about everything from racial identity to poverty to women’s rights to ability to life in Portland. Many talked about their relationships with their parents and loved ones. Some students used an epistolary form while others included song, drawing on hymn and rap. All in all it was an impressive first round.

After a quick intermission and monologue performance by Mahatma Poe, the top ten finalists were announced and called back up to the stage. In the second round, some writers like Alex Gerald and Sam Burnett continued exploring themes of identity and privilege, while others shifted their content. Bella Trent, a student from Madison who would go on to win first place, wrote, “A Poem About Picking A Poem for Verselandia!.” Other titles from the second round included: “A White Girl’s Guide to Color,” “A Letter to My Father’s Murderer,” and “A Fat Girl’s Short Retort to Society.” After this round, Mojgani performed a slam poem while math experts Kevin Sprager and Emilee Ball Lombard tallied up points. Then the top five were announced: Alex won 5th, Sam won 4th, Juan won 3rd, McKinley won second and Bella placed first.

Bella, who had wanted to compete since freshman year, was thrilled to finally participate. When asked how she felt leading up to it, she said that she was nervous at first—backstage she kept going over her cards—but once she got up there, it felt great. About winning: “It felt pretty cool but there were a lot of amazing poets; I was just grateful to have the opportunity to participate.”

Mary Rechner, the Writers in the Schools Program Director, was extremely pleased with this year’s event. “Verselandia! provides students from high schools across the city occasions to write and perform poetry, and it builds an audience for teen writers. Our partner librarians, teachers, and parent volunteers at each school run their own school slams, so many more students—beyond who performed here tonight—have been active participants. Together we are growing a culture of poetry, and this year at Verselandia! the quality of writing and performance reached a new high.”

Special thanks to PPS librarians and teachers, the crew and all participating students. Literary Arts is looking forward to seeing more student work in the forthcoming WITS anthology! 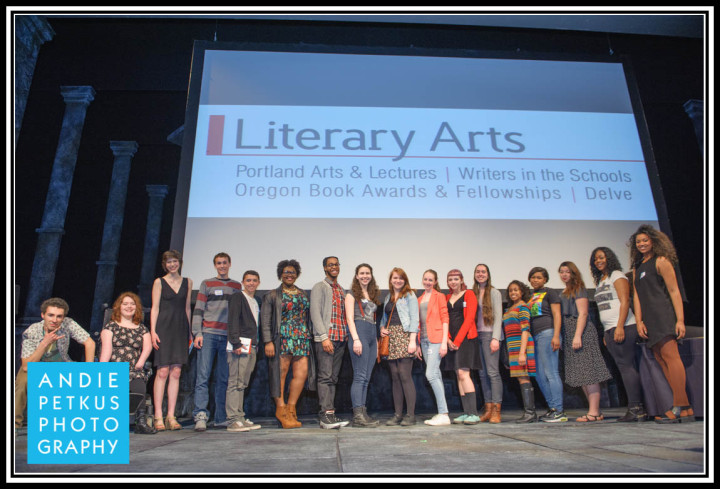 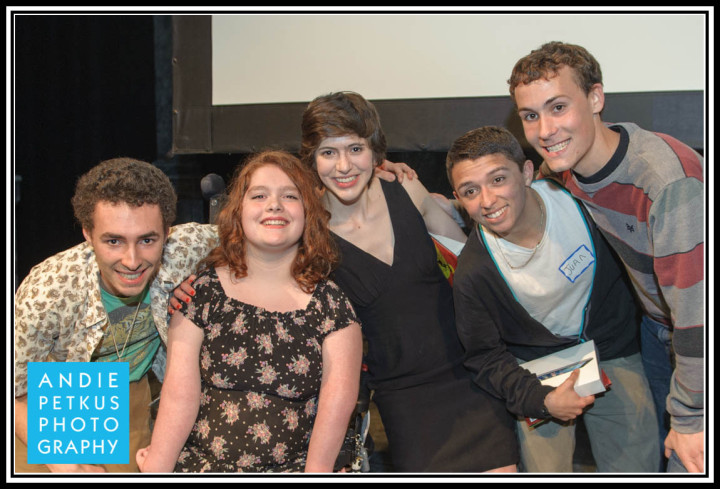