We had a great author visit with Michael Chabon at Madison High School the afternoon before his PA&L lecture on January 15! The 80+ students were well prepared and had excellent questions that Chabon clearly enjoyed answering. After being introduced by a student, Kaylee, Chabon began with a brief response to the most-asked question for writers: where do you get your ideas? He explained how he wished, back when he was in high school, that he had paid more attention to “old people, like my grandparents,” noting that “this isn’t to induce guilt” in the audience, but that “your family is an incredible repository of stories…so if you want to be a writer, exploit your grandparents.”

Students laughed and one raised her hand to ask how Chabon handled writing about real people in his life, asking specifically if he “made it up to them by baking them cookies.” Chabon smiled and said that as a writer, everything in one’s life is fair game and “I should probably wear a sign.” But he went on to seriously note that “if you’re feeling nervous about exposing yourself, or a sense of danger, that means you’re onto something worth writing about.” He noted that a writer can’t always predict who will see, or not see, themselves in a character that is based on them. 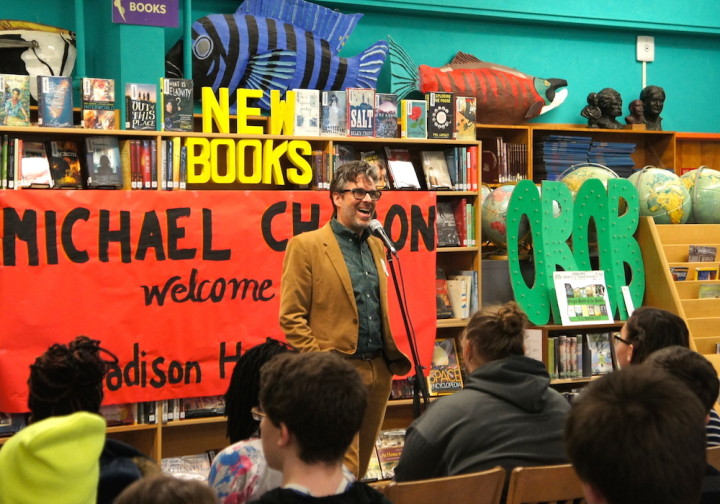 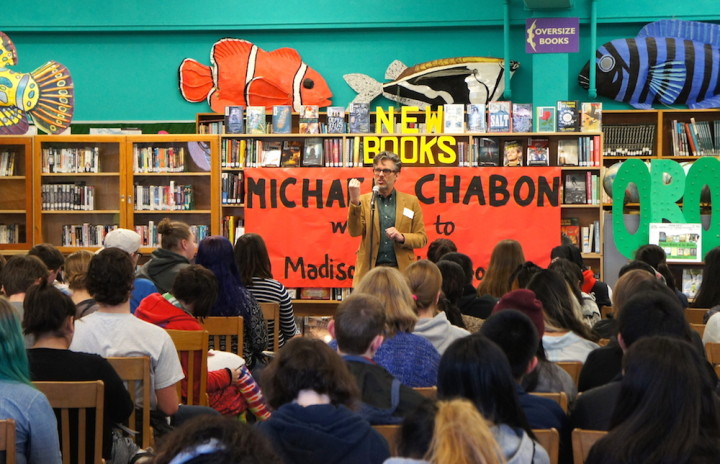 When asked how he became a writer, Chabon responded that he wanted students to know that the seemingly big decisions they were facing right now, “these yes or no questions,” were not as important as they seemed right now. “Don’t get so focused on them that you miss opportunities,” he advised, going on to explain that “the best things have happened to me as a result of saying yes instead of no. I’m not a yes person by nature–I’m more of a stick in the mud…but when you say yes and do or go to that thing, it turns out that’s when you meet the person who opens the door to opportunity.” He told the story of his seat-mate on the flight into Portland who had become a roadie for famous musicians, including the Rolling Stones and Kanye West, on a journey that started with answering a business card-size want ad for a blimp pilot. “He followed his curiosity.”

One student asked how Chabon dealt with bad reviews, to which Chabon replied, “Are there any?” and everyone laughed. “I try to keep perspective,” he replied. “There are reviews, and there are comments. Also, you care way more about this stuff than anyone else does.” He related an experience of getting a terrible review in a well-known publication and having people either not notice it in the first place, or just notice the headline and then write him to congratulate him. “Most people don’t care and the rest aren’t paying attention,” he said. “Actually, that’s good advice for life in general.”

The applause at the end of Chabon’s visit was thunderous, and he said he was very impressed with all of the students’ thoughtful questions and attentiveness. Many thanks to librarian Nancy Sullivan, teacher Gene Brunak, and Principal Petra Callin for helping us have such a great event! Nancy Sullivan even made Chabon an honorary member of the Madison HS Library RATS (Readers And ThinkerS) and gave him a T-shirt to wear: 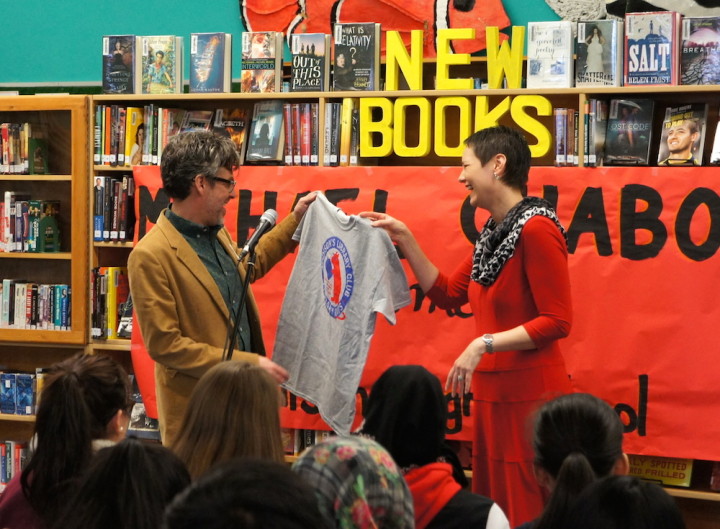