[by Stephanie Wong Ken] Ruth Ozeki winded down her weeklong WITS writers residency in Portland by giving a talk to students in the Japanese immersion program at Grant High School. Ozeki seemed impressed that there were so many young Japanese speakers in the room. She encouraged the students to continue improving their Japanese, as for her, the ability to speak two languages allowed her to bridge two cultures, both in life and in writing. “It’s a very key skill,” Ozeki told the students. “Probably one of the most valuable skills I have.”

The idea of connecting or bridging two cultures is one of the central themes in Ozeki’s latest novel A Tale for the Time Being, and the students were eager to ask her questions about what inspired her to write the book and how she developed her characters. “Why is the main character also named Ruth?” one student asked. “For me, the story was about a reader and a writer,” Ozeki answered, “I started writing Nao’s diary, but I needed to find a person to read the diary.” Ozeki then explained how she kept trying to find a suitable reader by inviting a character into the fictional world of the book and auditioning them to see if they were a good fit. But none of the characters seemed to work. “Then, the tsunami in Japan happened and Fukishimi,” Ozeki said, “and it was like the disaster created a rift in time. The terrible reality of the tsunami had broken the world.” This catastrophic event, known as 3.11, forced Ozeki to reevaluate the direction of the book and bring her reactions to the tsunami into the narrative. “I thought I could try to enter the world of the book myself as a real character, and allow the fictional world to stay open to reality,” Ozeki explained. “Being a character in the book allowed me to be involved in 3.11, but in a fictional world.”

“What inspired you to write the book?” Another student asked. “Definitely Dogen, the 1st century Japanese writer and his essay on uji, or ‘the time being’,” Ozeki answered. “I was thinking a lot about time and connections through time. Suddenly, I heard this voice of a young girl in head: Hi, my name is Nao…do you know what a time being is? And then the novel sort of took off from there.”

One of the students also wondered about why Ozeki decided to learn how to speak Japanese in college and eventually study and travel in Japan. “Well, growing up in New Haven, it was a very white town,” Ozeki answered, “And because I was this half Japanese kid growing up in a white world, I grew up thinking I was Japanese. So it was partly the sense that if I was going to be identified as Japanese, I should learn Japanese. But it wasn’t until I went to Japan and they looked at me like I was white that I realized it was okay that I was also American. I could be both.”

The talk shifted to how Japanese readers may react to the novel, particularly because it touches on issues in Japanese culture like suicide and bullying that could also relate to issues in American culture. “Japanese culture has a different way of viewing suicide and it’s being talked about in a more open way there, I think,” Ozeki said, “But here it is not being talked about as much, which is troubling to me.”

Ozeki then went on to explain to the students why she felt compelled to write about Japanese culture and events. “I have Japanese characters in my books partly because that’s my experience.” But she stressed to the students that there are many ways to write a story. “Don’t worry about using your own story or writing characters based on you,” she advised them. “Write authentic stores. Write something that comes from you.”

To wrap up the talk, Ozeki answered the timeless question: if you were stranded on a desert island, what book would you want with you? “Oh I’m bad at these types of questions,” Ozeki said, among laughter from the students. “Probably a collection of Shakespeare. In fact, I was reading The Tempest while writing the book so there is a lot of Shakespeare’s influence in the island scenes in The Tale for Time Being.”

Following a round of applause from the students and teachers, Ozeki posed for pictures and chatted with several students, including one student who handed her a draft of a story she was working on. Ozeki thanked her and, smiling, promised to look it over and send her feedback. 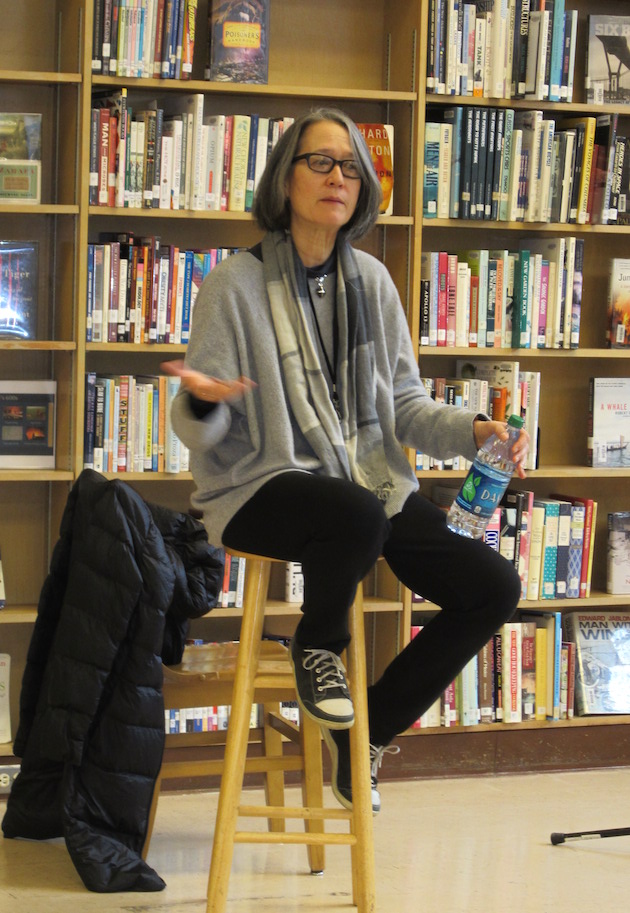 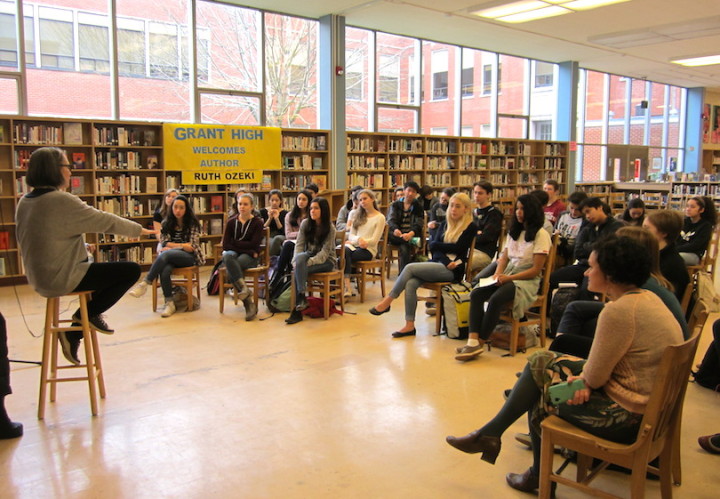 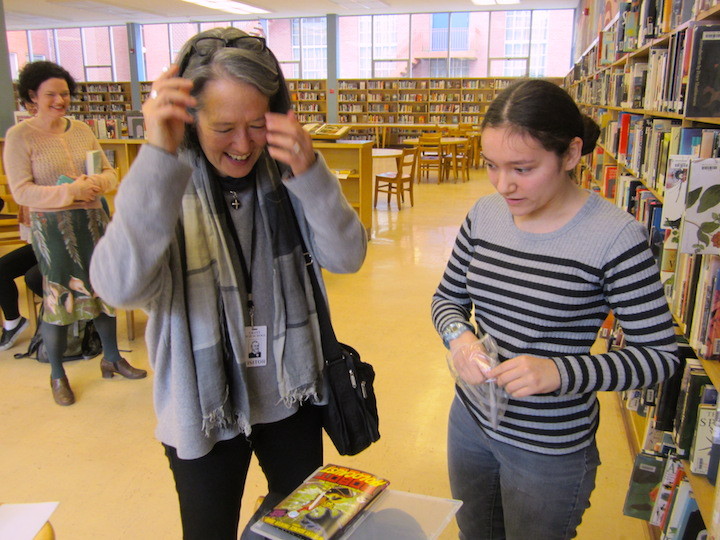 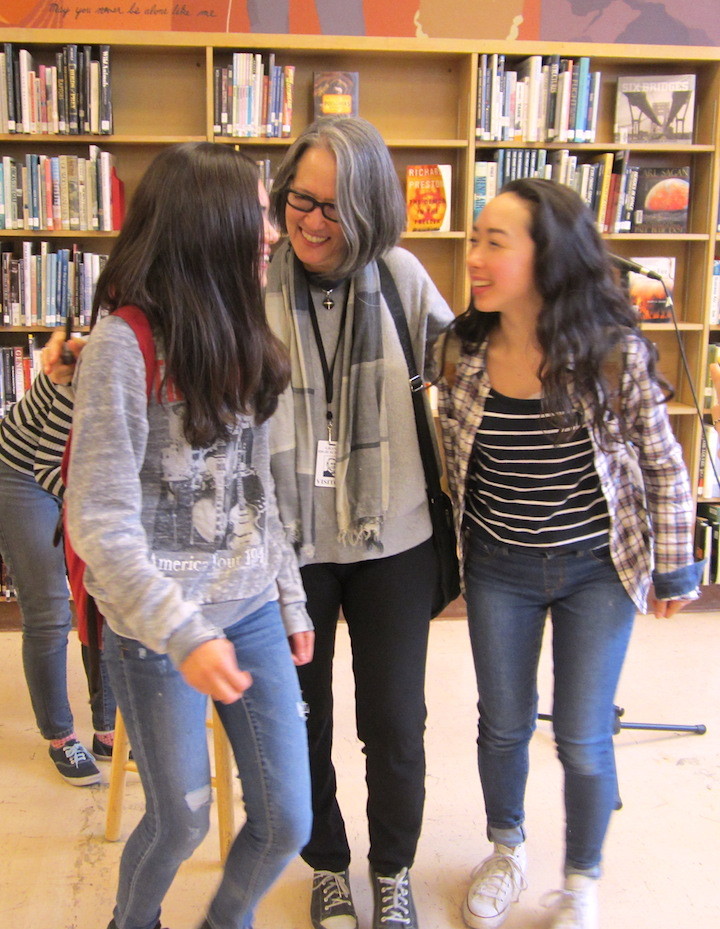 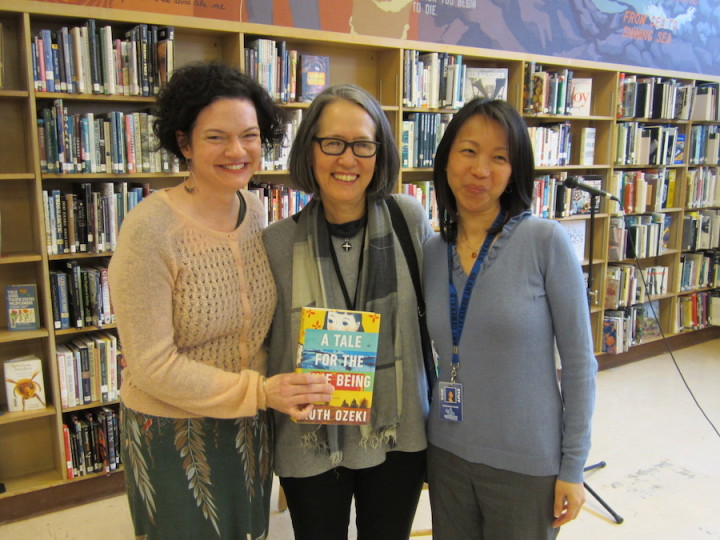