We visited Metropolitan Learning Center to participate in WITS writer-in-residence Melissa Reeser Poulin‘s poetry workshop with the combined classes of Stephen Lambert and Nam “Karen” Khalsa. As each student walked into the classroom, Poulin handed them a small square of paper with the name and photo of a famous poet on it, as well as a packet of poems and papers for the day’s activities.

Poulin began by asking students to listen deeply as she read the poem “Go to Lvov” by Adam Zagajewski and to write down phrases or words that stood out to them. Students followed her directions, some even closing their eyes as she read beautiful phrases that conjured up images of cathedrals, pastoral summer landscapes, and “the cornets of nuns” that “sailed like schooners.” By the end of the poem, everyone had several notes on their papers.

Then Poulin had everyone use these snippets to write their own poems, incorporating as much or as little of the original as they wished. After students intently jotted several lines, Poulin had them examine a hard copy of Zagajewski’s poem. They analyzed its lineation, discussing how the physical shape and punctuation of the poem affected the way it was read.

Poulin announced that it was time for students to get into groups according to which poet’s photo they had been handed. There were several small groups, organized by names such as Naomi Shihab Nye, Sherman Alexie, and Sylvia Plath. Once these groups were formed, Poulin had them read and discuss a poem that she had re-typed as prose, and to collaborate on breaking up the paragraph into a poem.

Each group had lively conversations and came up with a different form–from simple, even breaks with left-justified lines to more creative uses of white space, much like e.e. cummings’ poems. Poulin pointed out that there was no “right” or “wrong” approach to the creative process of shaping a poem.

Finally, she had students revisit one of their own poems and change its shape, whether it was a poem they had written earlier in the workshop or the one they had just written, inspired by Zagajewski. Again, students leaned intently over their papers, writing and crossing out lines and tapping their pens and doing the work of poets and authors everywhere: writing, revising, and writing again. 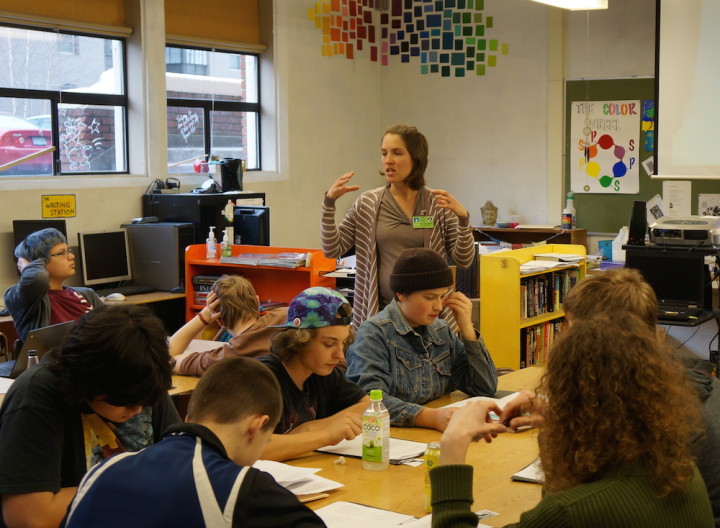 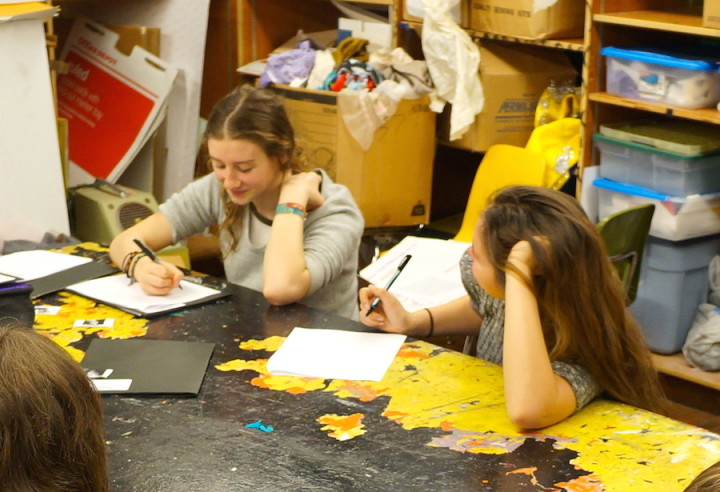 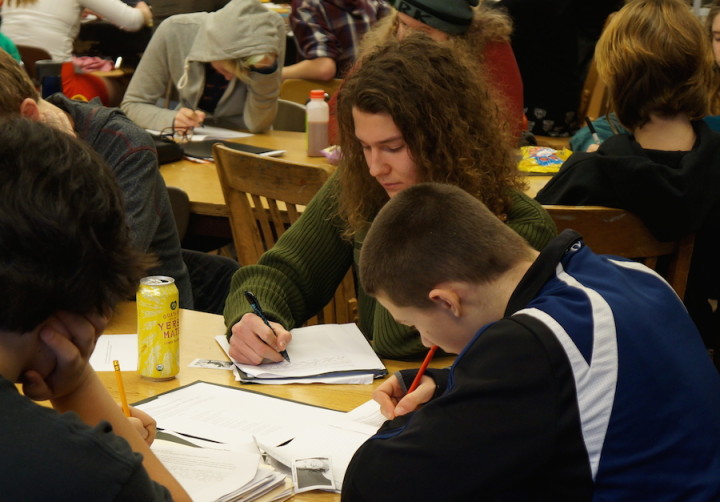 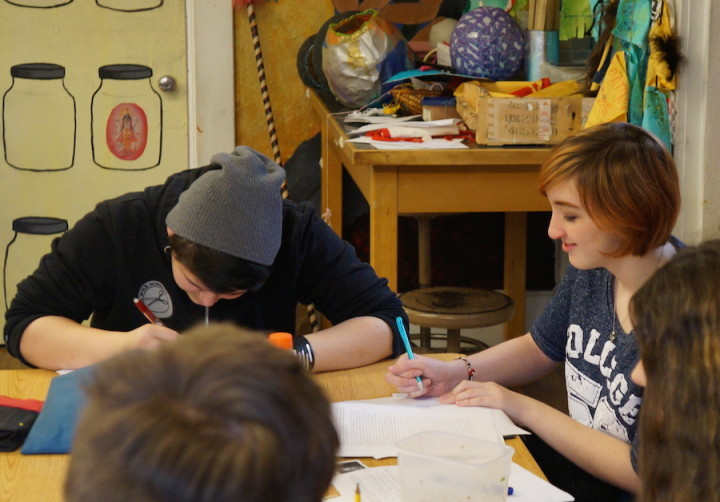 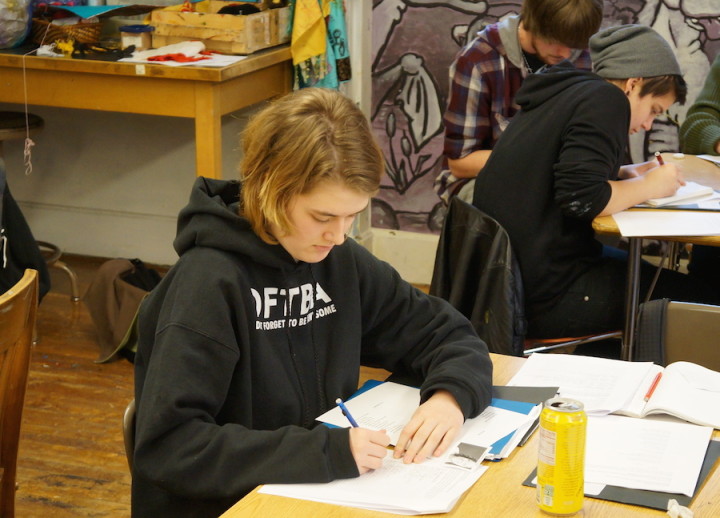 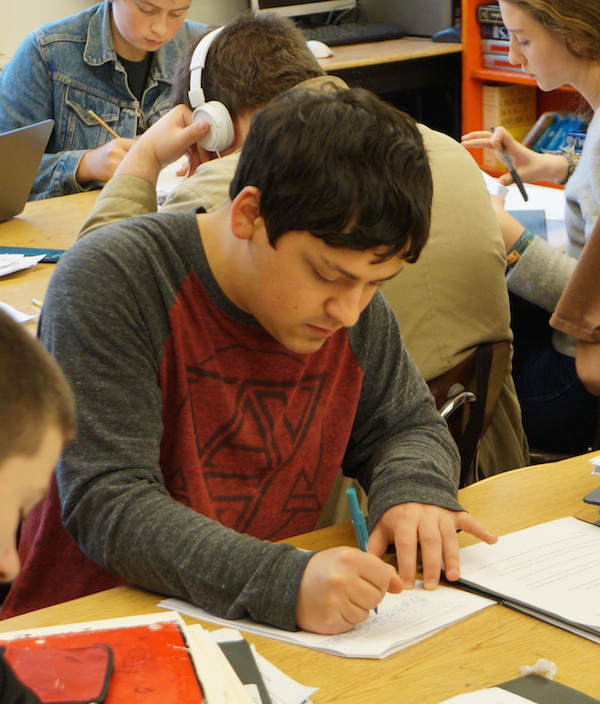 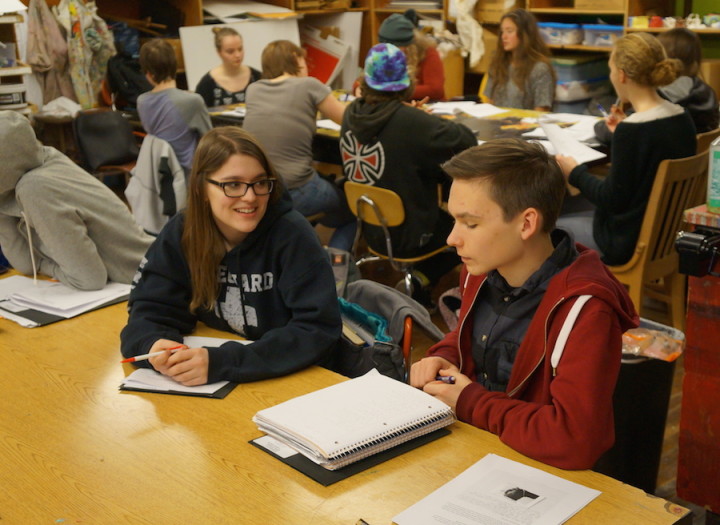 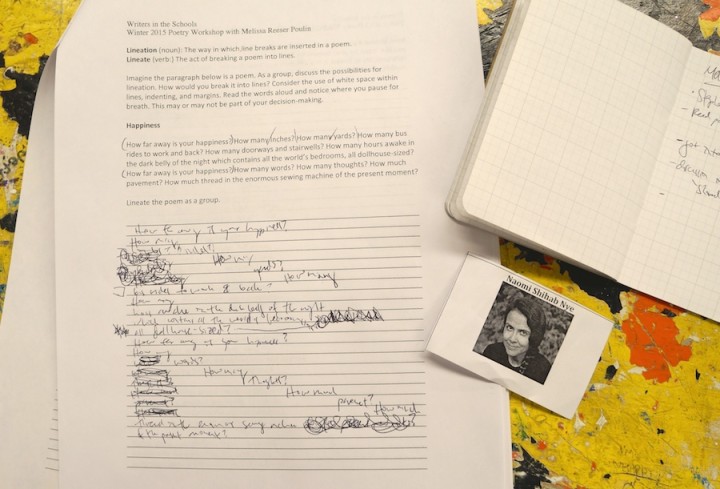