WITS recently visited Grant High School to document writer Cooper Lee Bombardier’s work with students in Dylan Leeman’s ninth grade writing workshop. It was Friday morning and students joked and chatted as they took their seats in a classroom with bright yellow walls hung with student artwork–specifically, hilarious Shakespearian insults. On the board at the front of the room were the guidelines for this session’s writing workshop, which was about generating new writing, not revising or editing. 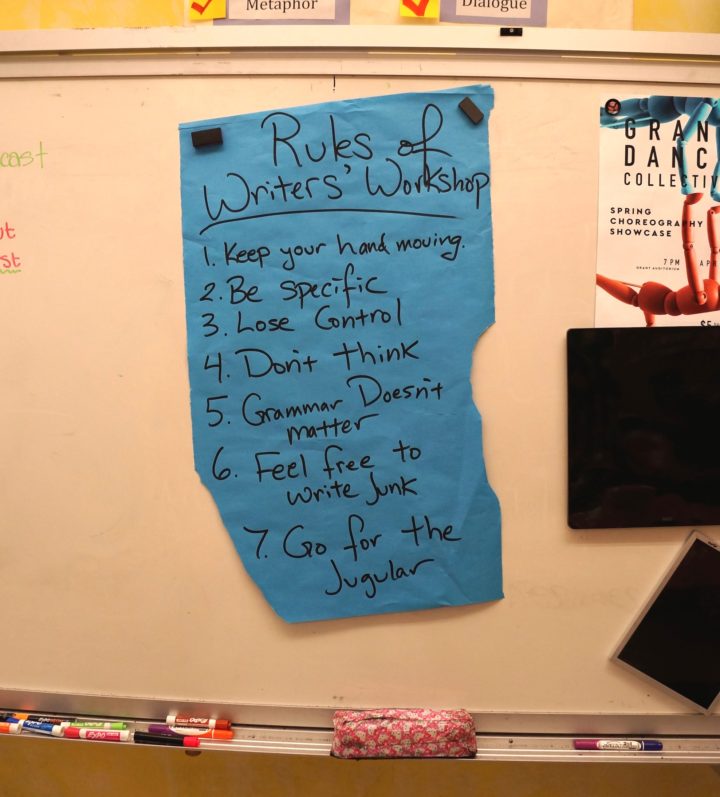 Cooper began the class by playing a shortened clip from Miranda July’s Somebody App, an art experiment and social messaging application for people to have total strangers deliver personal messages face-to-face. 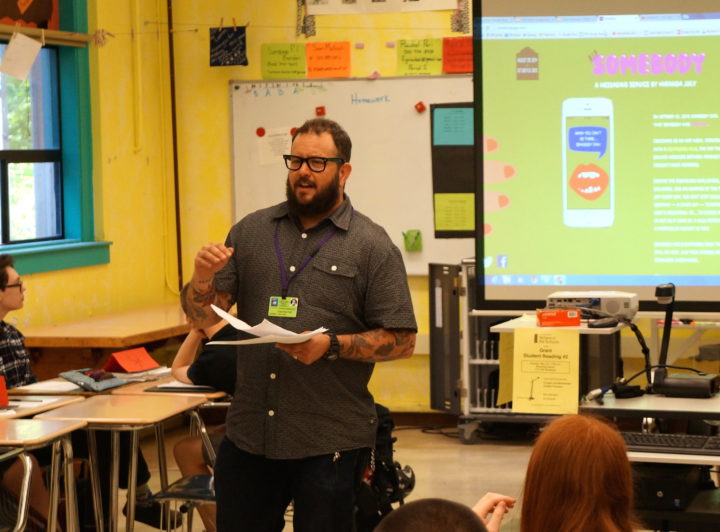 The brief clip was, as July’s work often is, funny and awkward and poignant. After pausing it, Bombardier encouraged students to think about this act of creating conversations between strangers. “I want you to take the characters you’ve created and been working on, and put them together and talking,” he said. He put on music and set a timer. For the next fifteen minutes, all that could be heard was the songs and the scratches of pens and pencils on paper. 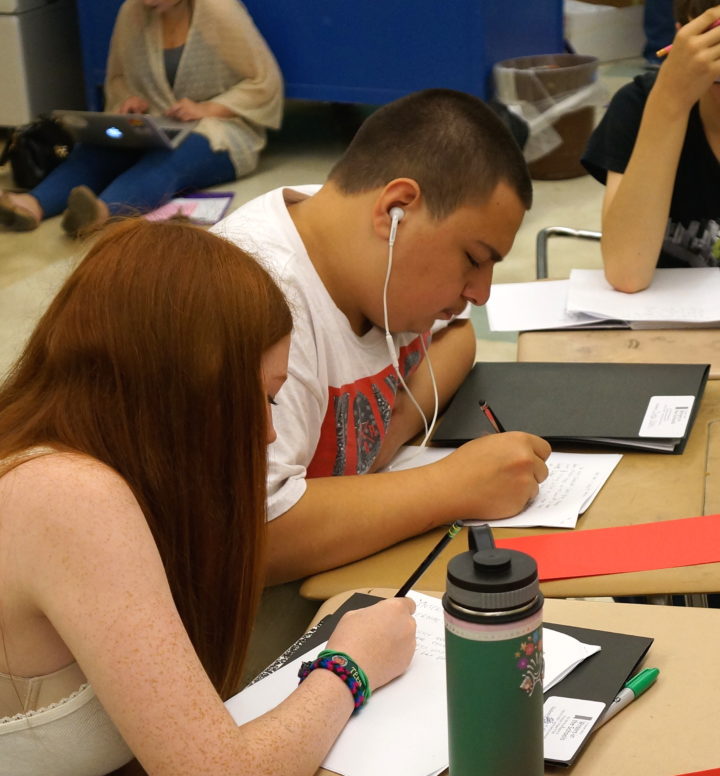 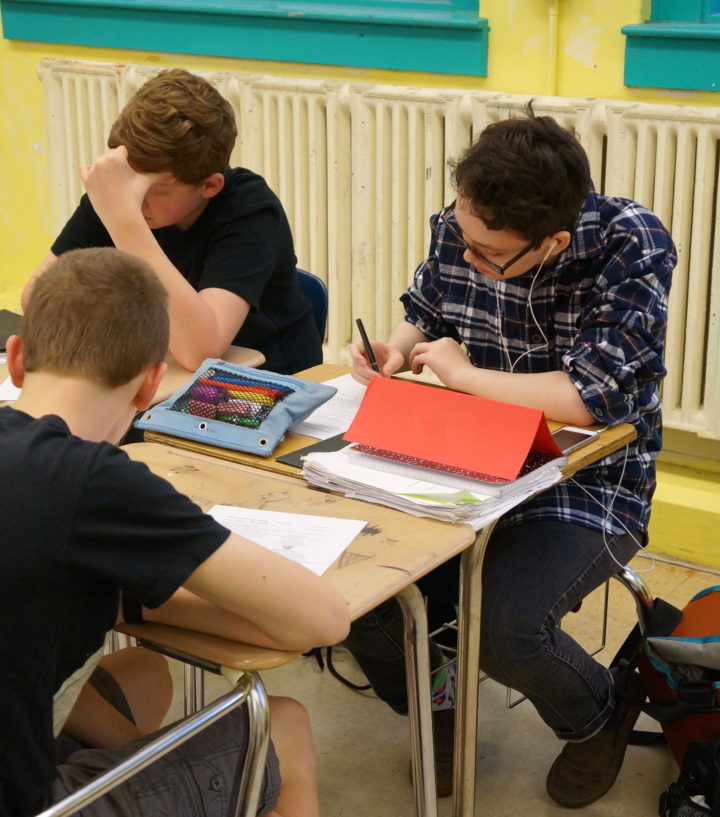 At the end, Bombardier encouraged students to share. “It can be a paragraph; it can be a single line,” he said. A few students glanced at each other, giggling in nervousness, and finally a few raised their hands. The lines from the conversations they shared were often tense, with confessions, accusations, and often relationship drama. Their classmates applauded after each share. 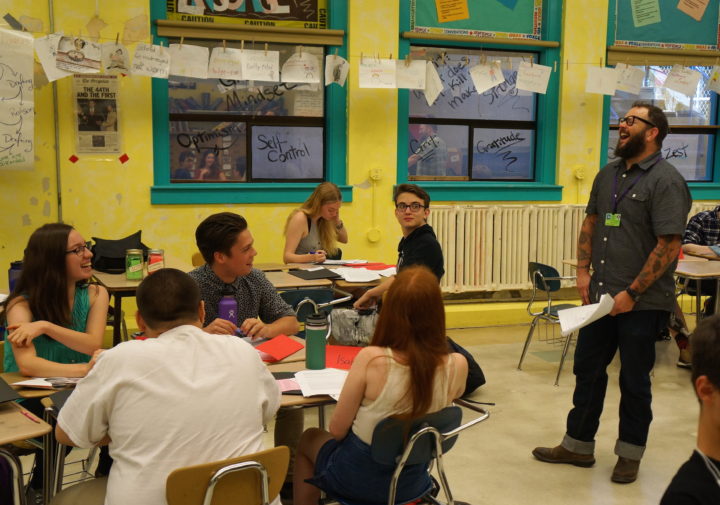 Bombardier then had students take turns reading an excerpt from a short story by Junot Diaz. “Okay, who is telling this story?” he asked afterward. “And what does telling this story in second person, using you, affect how you read it?” 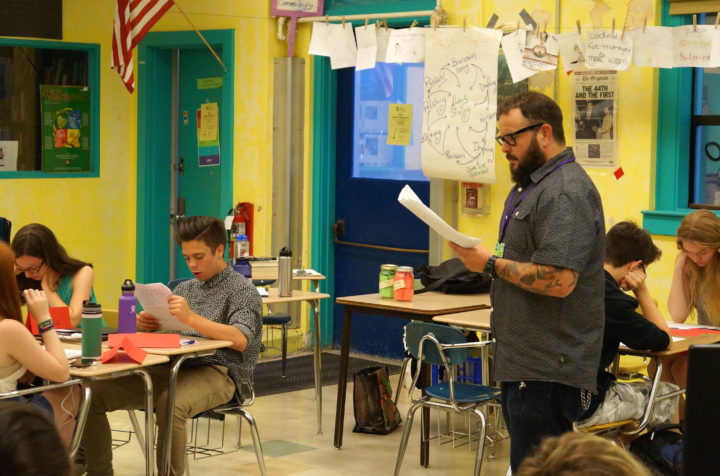 Students discussed the identity of the protagonist–a rebellious Latina teenager–and why telling this story as “you” made the readers feel like they were part of the story.

“What are the conflicts?” prompted Bombardier. Students’ hands shot up: the character’s struggle with her mother was clearly easy to relate to for a roomful of teenagers.

“Okay, let’s do a writing exercise on conflict,” said Bombardier, reaching into his bag. “This is so Portland,” he said with a laugh, “but I had a craft night and put things in Mason jars.” One contained red slips of paper, the other green, and they were labeled: 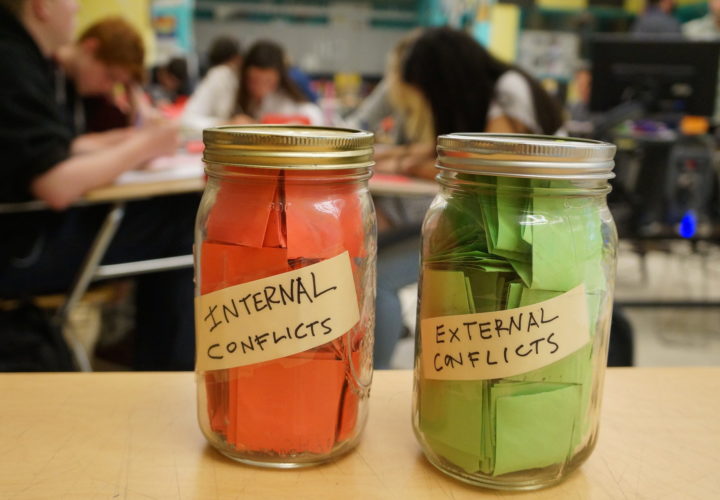 “Pick one conflict from each jar,” instructed Bombardier, “and then we’ll use these two conflicts with the characters your working on. They can each struggle with one, or maybe one character is facing both.”

Students passed the jars around, pulling sheets of paper and reading them, and the room became noisy as they laughed and began discussing their conflicts with each other. 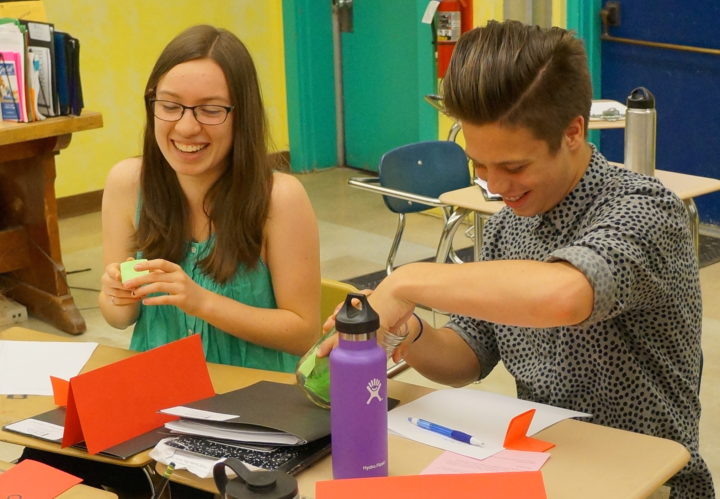 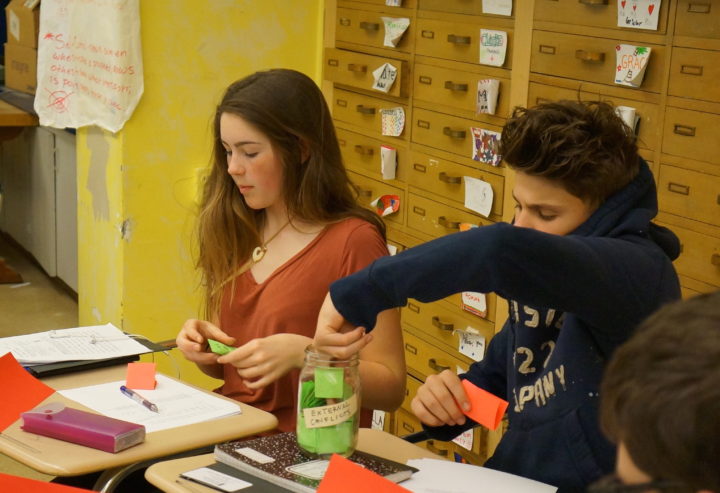 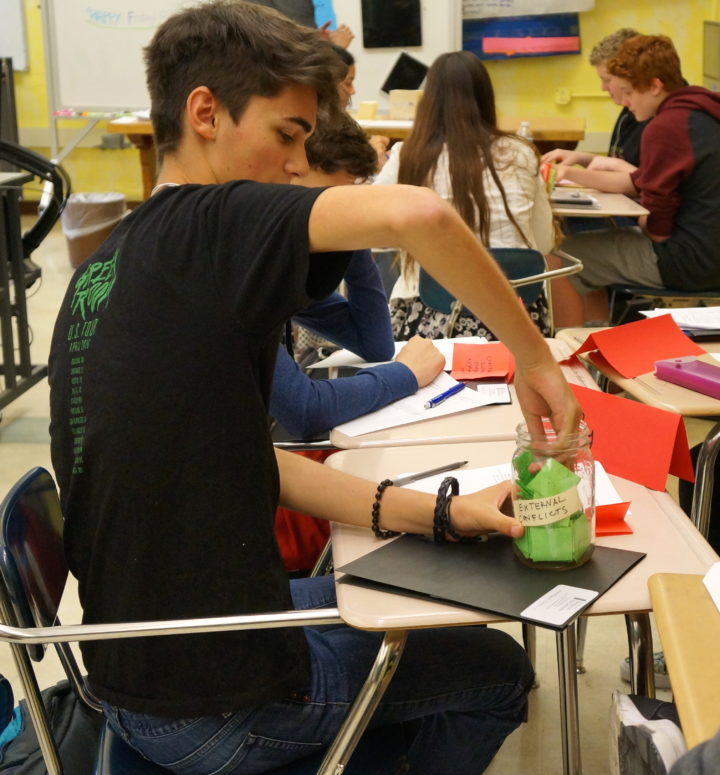 “Okay, let’s hear what everyone got,” said Bombardier.

“Fear of public speaking,” one student read, raising his eyebrows to elicit some laughs, “and style got co-opted by hipsters.” Another student hooted and clapped. 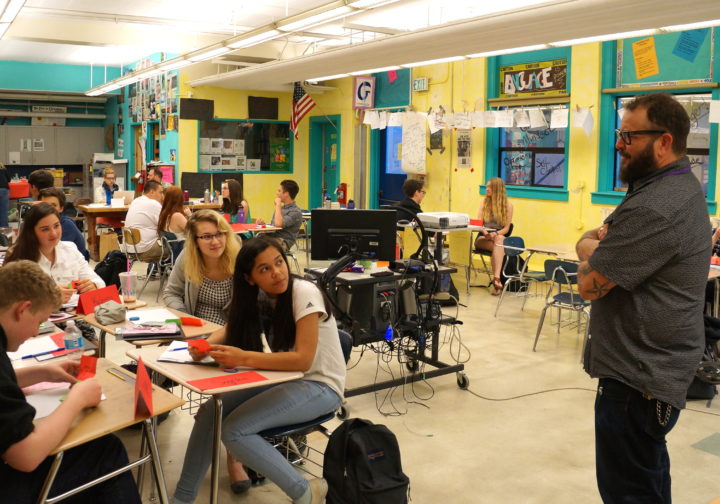 Students took turns reading out their conflicts, with several more murmurs and laughs, and when it was time to write, everyone bent over their papers. Bombardier passed around extra sheets of paper for students who were running out of room. He also paused to chat with students individually about their work and answer questions. 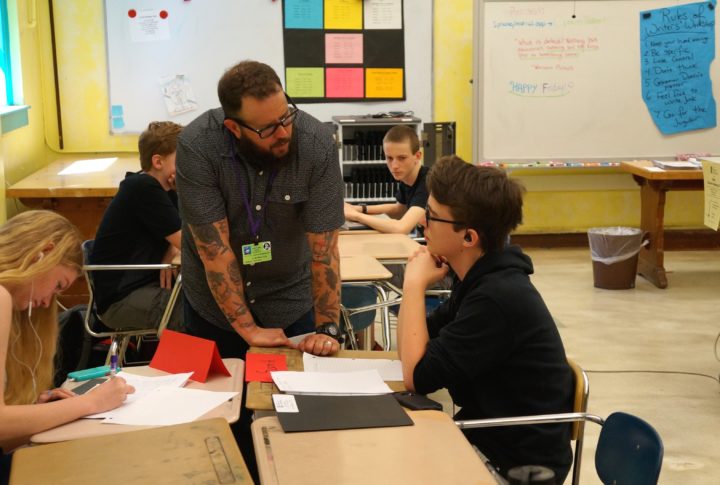 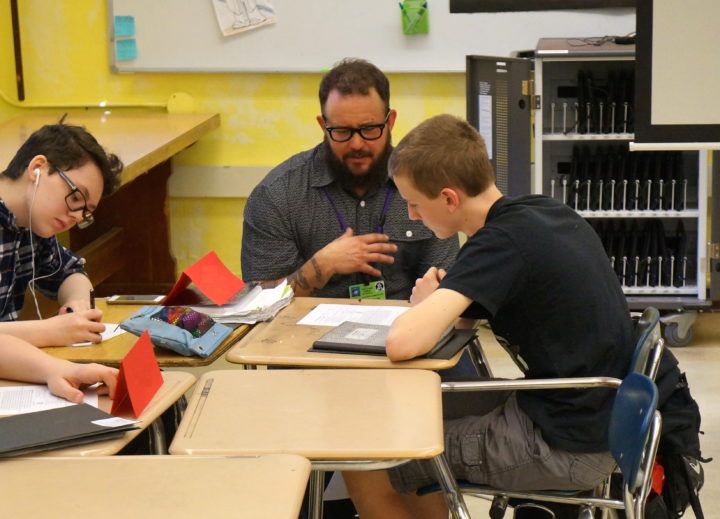 Before the end of class, Bombardier and the classroom teacher, Dylan Leeman, asked students to sign up for the WITS reading that would be held at Broadway Books. Several were excited to participate and share their work alongside other Grant students who worked with WITS writers-in-residence. 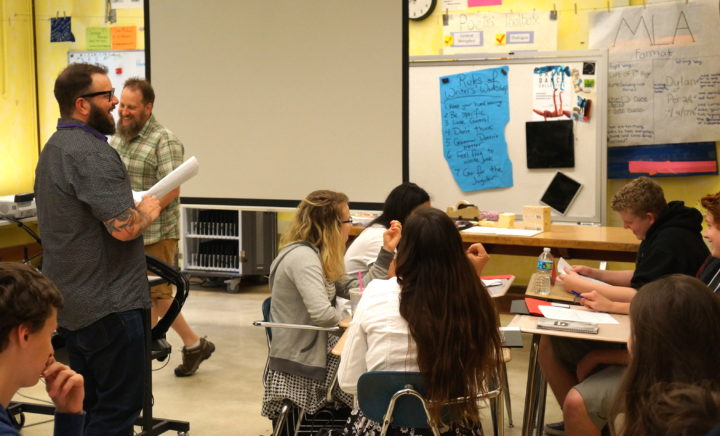 By the end of the class period, students had accomplished a lot of writing. Several stayed afterward to work through lunch on their pieces. One student moved across the room and sat down next to another.

“I wrote this one sentence that was, like, how did I write that?” her friend replied with a huge smile. 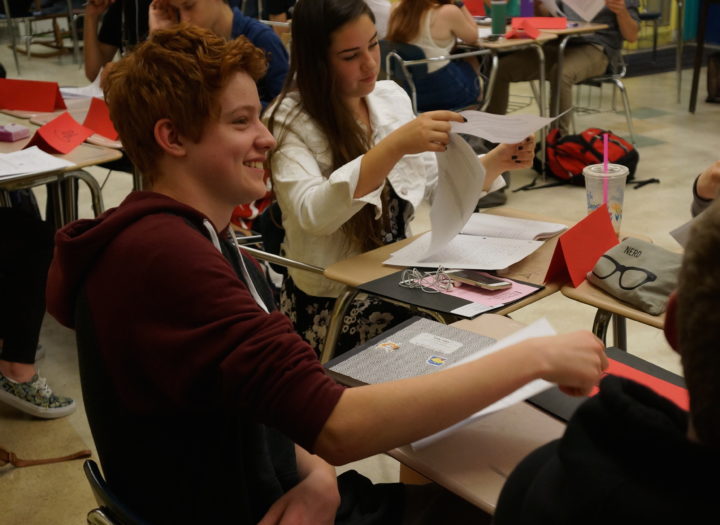 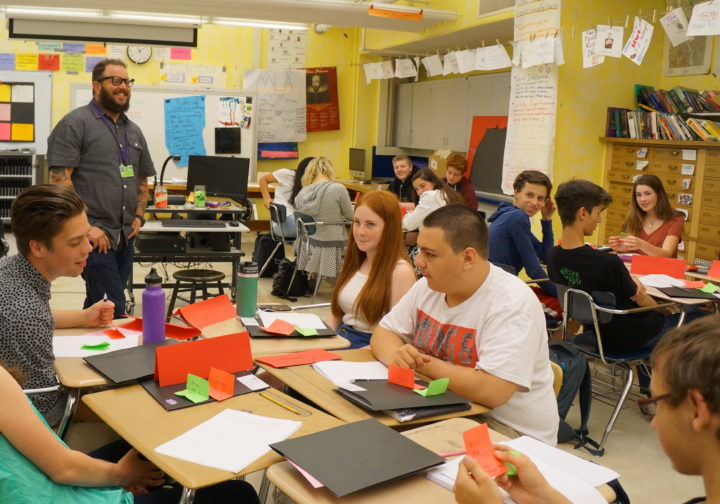 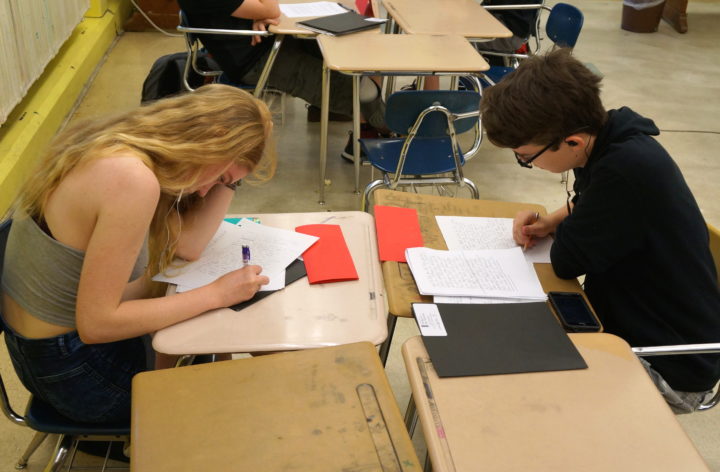 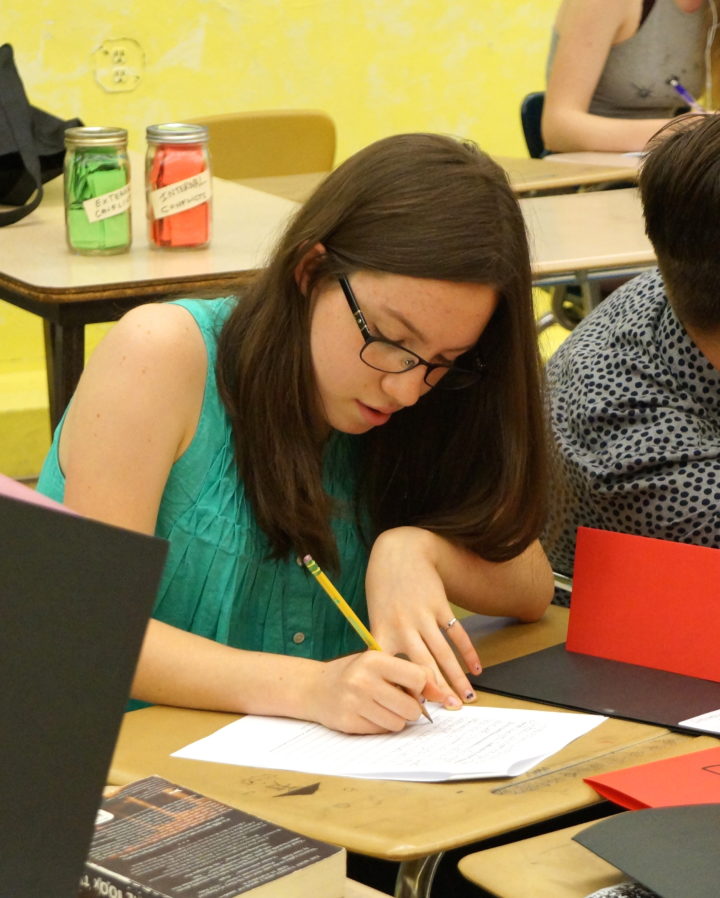 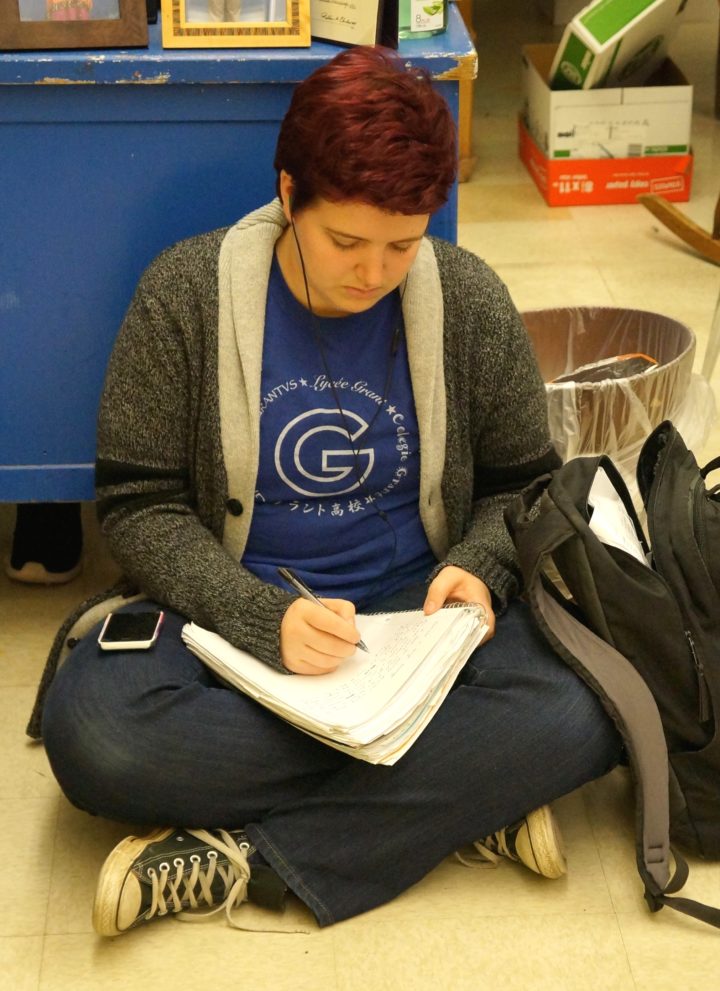