Edmo began by involving students in the story of how Coyote made the Columbia River. 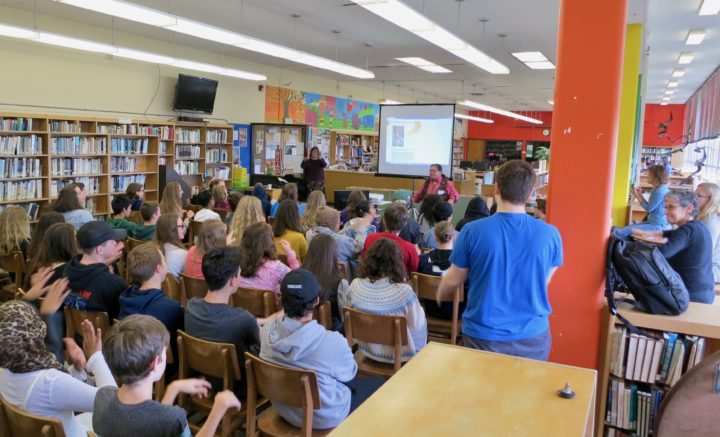 At first some students were hesitant, but after a couple renditions, they all joined in, holding their arms out and repeating the words along with him. As Edmo told more stories, he had students join in with snake sounds, words, and hand motions, prompting them in a call-and-response that held their attention.

“What makes up culture?” he asked after telling a few stories, and of course “stories” was one of the students’ responses. They also recognized that clothing, food, language, religion, and music are essential parts of culture.

“Now imagine if someone came in and said that all these parts of your culture were wrong,” he said, and told stories of growing up hearing stories from his father, but never learning his family’s Native language, and not being called on in school because he was Native American.

“But Indians adapt,” he added. “I grew up in Celilo Village and watched my grandparents fish, and my parents fish.” But when the Bonneville Dam was built and flooded Celilo Falls, he couldn’t fish. “So I adapted,” he said, saying that now he fishes for his living with stories.

Edmo is also a published poet and read his poems “Indian Education Blues” and “Dairy Queen Ritual” poems from his book These Few Words of Mine. He first published his poems in high school by printing them and stapling them together in a book, which students would now know as a zine. 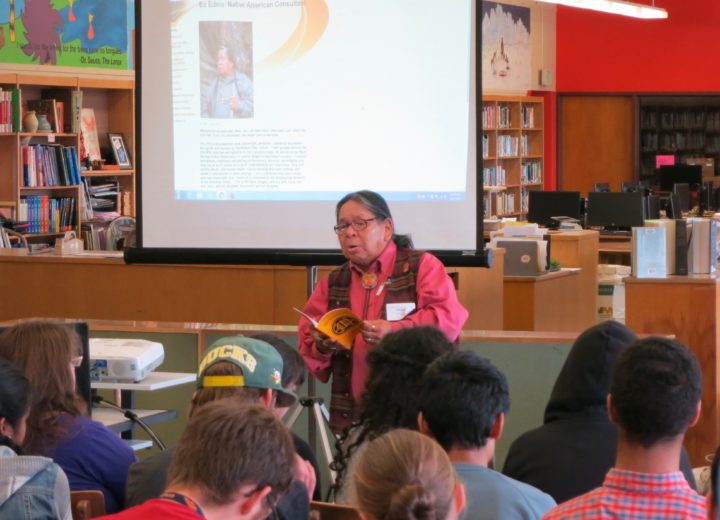 Finally, Edmo told a story of going to New York City with his long hair in braids and getting surprised reactions from people there. He chuckled relating a story about a woman who shouted, “It’s a bloody Indian!” when seeing him, “Because she thought we were all dead.” Edmo said he tells stories to dispel stereotypes and spread awareness of Native culture, and he encouraged students to check out www.wisdomoftheelders.org to learn more about storytelling, as well as the book Do All Indians Live in Tipis? a book of questions and answers published by the National Museum of the American Indian.

Students gave him a warm applause at the end, and we want to thank their teachers and Librarian Campillo for facilitating such a great author visit. And, of course, a huge thank you to Ed Edmo for being such a humorous, informative, and engaging speaker!