[by Kate Jayroe]  Acclaimed writer Colum McCann visited Madison High School on Friday morning, February 24. Jake, a Madison student, delivered a thoughtful and moving introduction to McCann’s visit. Jake brought focus to McCann’s philosophy of radical empathy and discussed the work that McCann does with Narrative 4, the nonprofit with a mission to build “a community of empathic global citizens who improve the world through the exchange of personal narratives.”

As McCann began his visit at Madison, he spoke of his deep fondness for the city of Portland, explaining that he has close family in Portland and that he spent time traveling Oregon in his youth. This led to a captivating narrative of the young McCann as he left Ireland, where he was a successful journalist in Dublin, and moved to Cape Cod with a broken typewriter, inspired by the likes of the beat poets, and in particular, Jack Kerouac.

McCann went on to describe the many people he met as he traveled the United States by bicycle, particularly on his journey along the West Coast, soon after failing to write a novel with his broken typewriter. He said that he heard the stories of the people he met and that the act of listening became something he considered more and more. “This world we live in is indeed legislated by the way we get to tell our stories. The act of listening seems to be an act of dignity.” While he encountered people of many different ethnicities, economic backgrounds, and political viewpoints, McCann found that “all of us fundamentally believe in the decency of the spirit.”

“I wanted to investigate the world.” He went on to say that he wanted to travel the United States in particular, having desired to see the country through the idea that it’s “a vast democracy of storytelling.” McCann read provoking, inspirational, and funny sections of his forthcoming book, Letters to a Young Writer.

McCann explained that the inspiration for Letters to a Young Writer came from a failed attempt to upload letters to aspiring writers on Facebook. Only one letter went viral, and the idea, he said, was ultimately better suited for a book. As McCann read from a section about failure, it became clear that the notion of failing was not only important to the writer, but very necessary. “Failure is vivifying,” he said. “Failure dilates your nostrils…Failure admits daring.”

One student asked, “Do you believe storytelling can heal?”

McCann replied with certainty. “Storytelling is an escape from the jail of the self.”

This sentiment aligned seamlessly with the discussion of what McCann does with Narrative 4, which engages in storytelling exchanges. People of opposing or vastly differing viewpoints tell each other’s stories through the first person, as if they are inhabiting that person’s identity. Recently, Narrative 4 partnered with New York Magazine in a groundbreaking storytelling exchange between victims of gun violence and gun enthusiasts. The idea of radical empathy, and the mission of Narrative 4, was something the Madison students had studied in preparation for McCann’s visit and many students expressed enthusiasm and excitement for the social action of the nonprofit.

McCann solemnly noted: “Those of us with privilege have the ability to use our privilege to expand our empathy toward others.” He went on to say, “There is some form of commonality with all of us, no matter how diametrically opposed people may seem.”

While poised and assured through most of the visit, one question caused McCann to pause. “As you get older, is empathy harder to retain?”

“Was I more in love with the world and the idea of hope when I was younger? That’s a great question. I have to think about that for a minute…my job now is to keep fighting for empathy and hope. Life is never finished. As you get older, you learn that life is never finished.” He went on to thank the student for her question.

As the visit wrapped up, many of the students and faculty were laughing at the funnier anecdotes McCann told throughout his visit. But he ended on a serious note. “My goal is to make the world just a little bit of a better place.”

As he exited Madison’s library, the students continued to clap, visibly moved by an act of storytelling.

Literary Arts would like to thank Colum McCann for his generous visit with the students, and to thank the Madison high school students for their passionate questions and eager preparation. We also would like to thank participating teacher Gene Brunak and librarian Nancy Sullivan for helping to prepare for and coordinate this author visit. 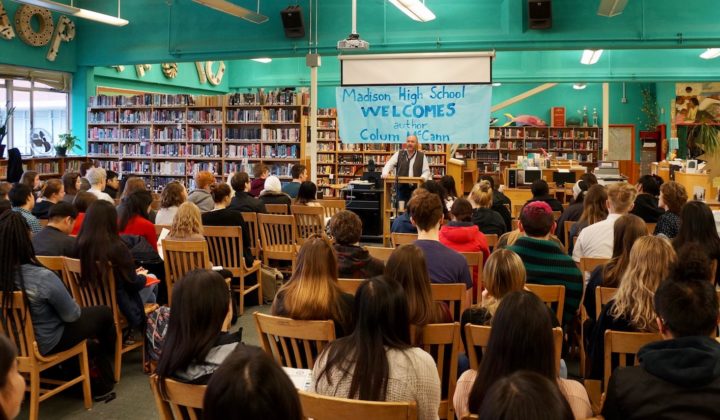 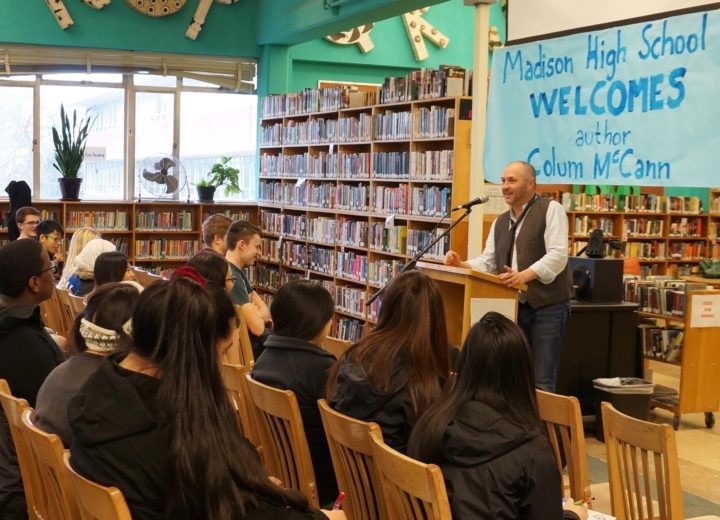 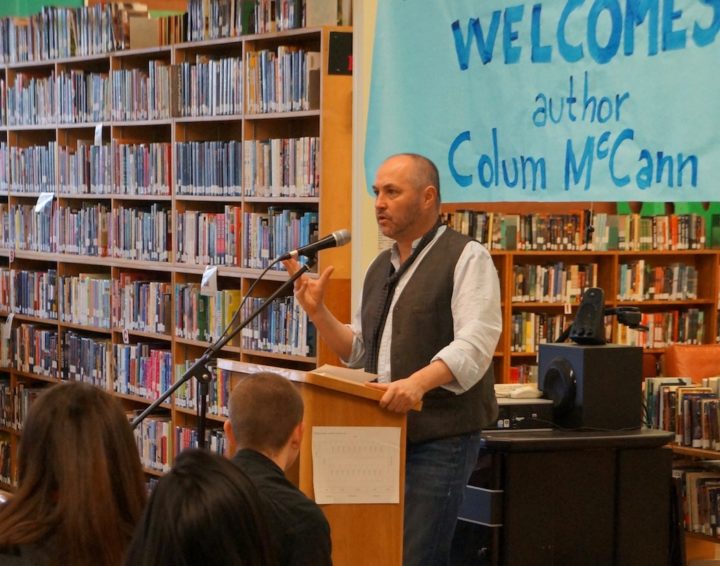 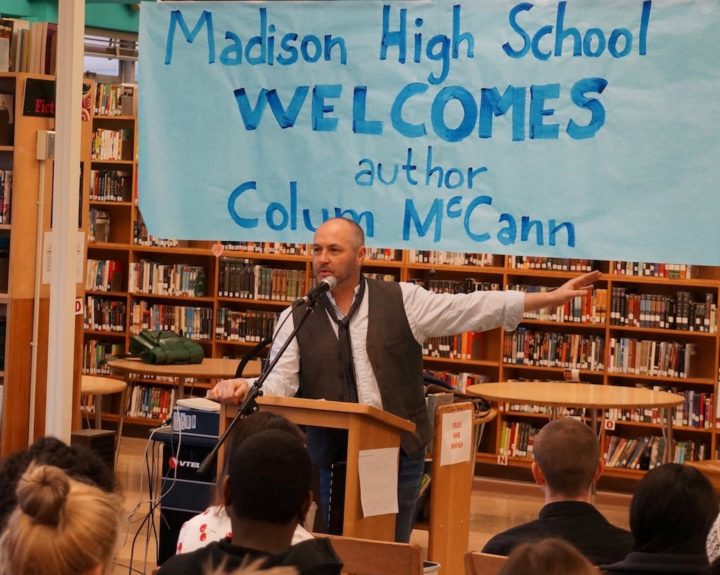 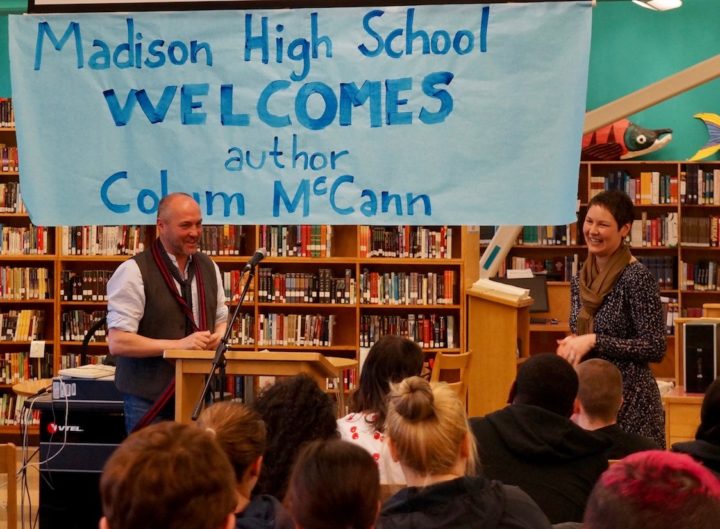