We brought New York Times bestselling author P.C. Cast to Madison High School to visit with Brooke Bettencourt’s Language Arts class this week in the library, and everyone had a great time together. Cast has sold over 20 million copies of her books in over 40 countries. She had no shortage of life experience before getting her first book published: she served in the Air Force, put herself through college while raising a toddler, and taught high school for fifteen years.

“I began by writing terrible stuff,” she said, describing the particularly awful physical conundrum of a male centaur falling in love with a female human, “and I sent this to my grandma, who then sent it along to my cousin, Anne Tyler, who wrote The Accidental Tourist and is very literary.” Cast laughed along with the students. “But I took that horrible manuscript and I kept reworking and rewriting it!” 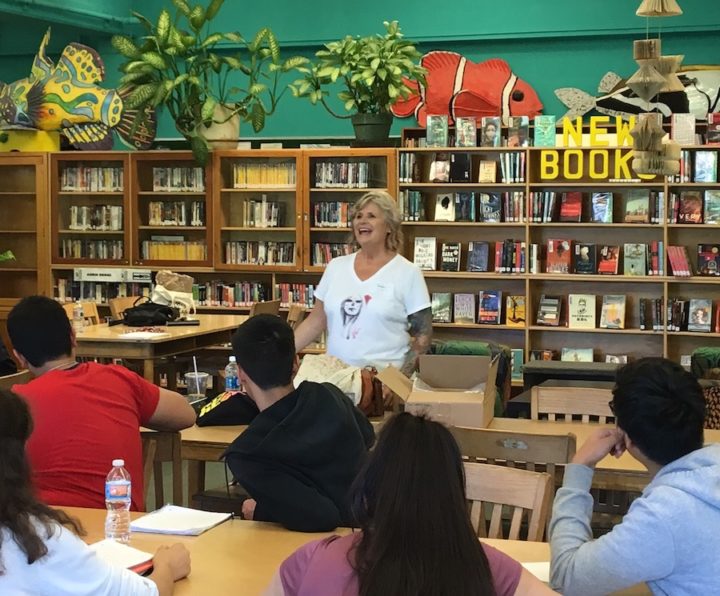 She told how, in her late thirties, she decided to audit a class at Oakland State University, where she was teaching at the time, from a teacher whose students were getting published. “I pretended like she [the teacher] was my editor, and I turned in my chapters every week, on deadline.”

This became her first book, Goddess by Mistake, published in 2001. When her agent called to see if she had other ideas for books, “I said yes,” said Cast, “but I didn’t.” She told a story about going to a museum and seeing a statue of Chauncey Bradley Ives’ Undine Rising from the Waters and being moved by it. “I went home and started brainstorming.” She also had an idea while lighting prayer papers with her friends about summoning goddesses. All of this contributed to the narrative in her Goddess Summoning series, which was a three-book contract. 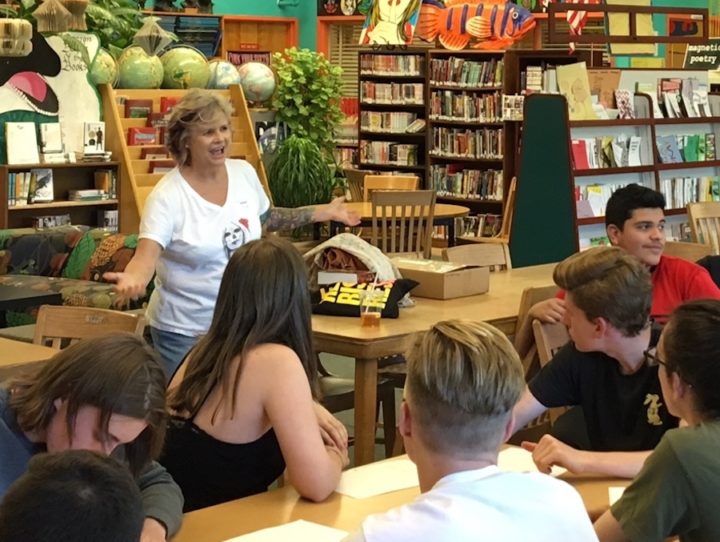 “How many hours do you spend on each book?” asked a student.

Cast replied that it depends on the book, but she admitted to being prolific. “You know how when you’re reading a really good book and even when you put it down, you feel like you’re living in book-world?” Several students nodded their heads. “It’s the same for me writing. I usually write five hours a day, and I write at night. I usually stop around one in the morning and then have to unwind.”

She admitted that this was very different from when she was writing her first books, because she was still teaching high school. “I would write in the minutes between classes,” she said. “Or when the students were doing free-writes in their journals, I would write at the same time. I got very good at jumping in and out of the worlds I was writing in.”

Currently Cast writes at her home in the southwest hills, “at my tread-desk with my candles and crystals and dogs and Maine Coon. And this book,” she held up Moon Chosen, “is set in post-apocalyptic Portland, so sometimes when I walked outside after I finished writing, out into the trees and the moonlight, it felt like I was still in the book.” 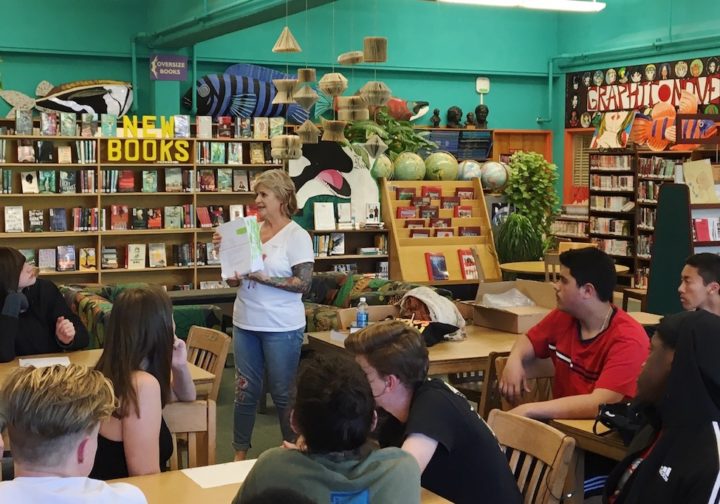 “Do you always have a set plan for your books or do you just sit down and write?” asked another student.

Cast said she learned with the House of Night series that “life is easier with an outline.” She said she usually starts writing a book with the beginning chapter and the end in mind. “All my books are very character-driven,” she said, “so sometimes even when I have an outline, it changes as I write.” 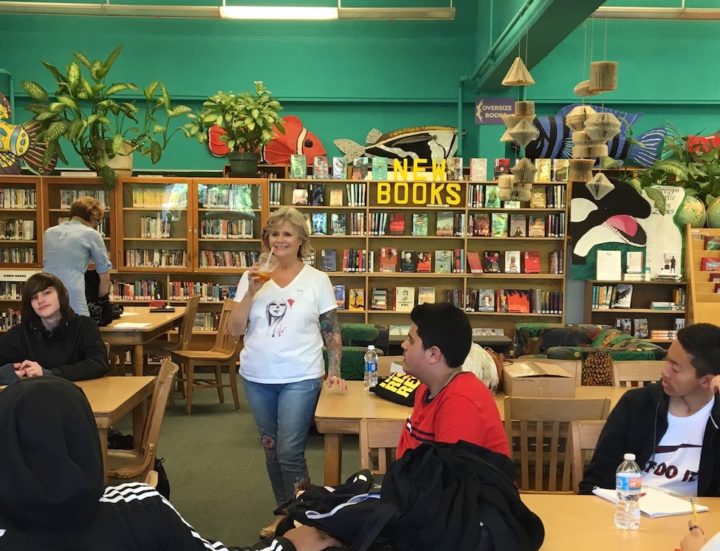 “Are your characters based on people you know? Or do they come from dreams?” asked one student.

“Both,” she replied. Cast said that she keeps a journal next to her bed because often characters and details will come to her in the state between awake and asleep. “I’ve also based characters on students I had,” she said with a wink. “Then I killed off the ones I didn’t like.” Students laughed along with her. “But seriously,” she continued, “it’s easier as a new author to take a person from real life and have them take life in your fictional world.” She explained that these characters always take on their own unique characteristics and choices, but writing from real life can give new writers a starting place.

Another student raised their hand. “How do you keep track of all your characters?”

“I used to do word searches,” she replied, “but now I have an assistant!” She explained how, with over forty different books in print, she had an assistant make character charts to track all of the different people she’s created.

“What are some of your favorite books?” asked another student.

“That’s hard!” she said. “I just finished Laini Taylor’s Daughter of Smoke and Bone and loved it.” She also recommended the Outlander series, Fahrenheit 451, To Kill a Mockingbird, and noted that she reads across genres. “I read everything,” she said, “and I’d encourage you to ignore genres.”

For the final fifteen minutes of her visit, Cast gave students the opportunity to do some writing of their own. She gave them a choice between two writing prompts. “The first one is for the prose writers,” she said. “Pretend I’m a genie, who can zap you and grant a wish, and for twenty-four hours you get to be anything except a human. You keep your brain, though, so you are yourself. You can be animal, mineral, plant, and so on. Be a desk. Be a dolphin. Be a rabid wolverine.”

“Is my brain going to scale?” asked one student.

“Are there any limits?” asked another.

“Dude, there are no limits,” she replied. “Just not human.”

For the second prompt, which Cast declared was for the poets in the room, she asked them to turn off the part of their brain that cares about judgement, both internal and external, and then write about what they would look like–how they would dress, do their hair, etc. “Remember what I told you at the beginning,” she said, “it’s okay to have terrible first drafts!” 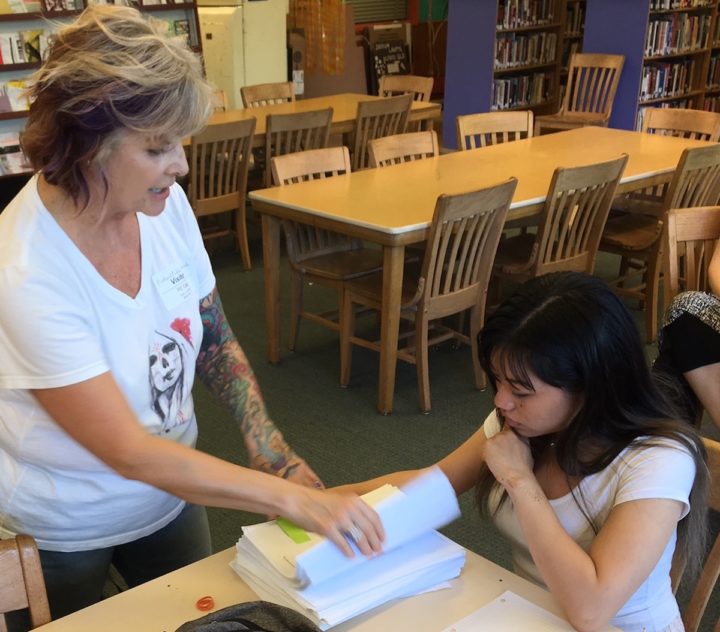 As students wrote, she visited with them one-on-one, showing them copies of a line-edited manuscript and answering more questions about writing. She brought extra copies of her books and signed them for students as well.

We’d like to thank PC for a fun and generous author visit, Ms. Bettencourt for helping to coordinate the visit, Ms. Sullivan for the use of the library, and of course the students for their attentiveness and great questions. 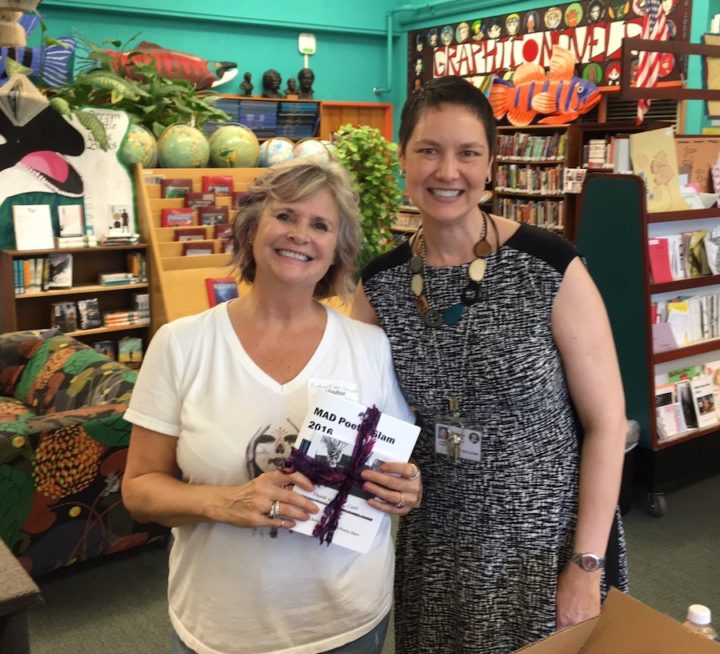