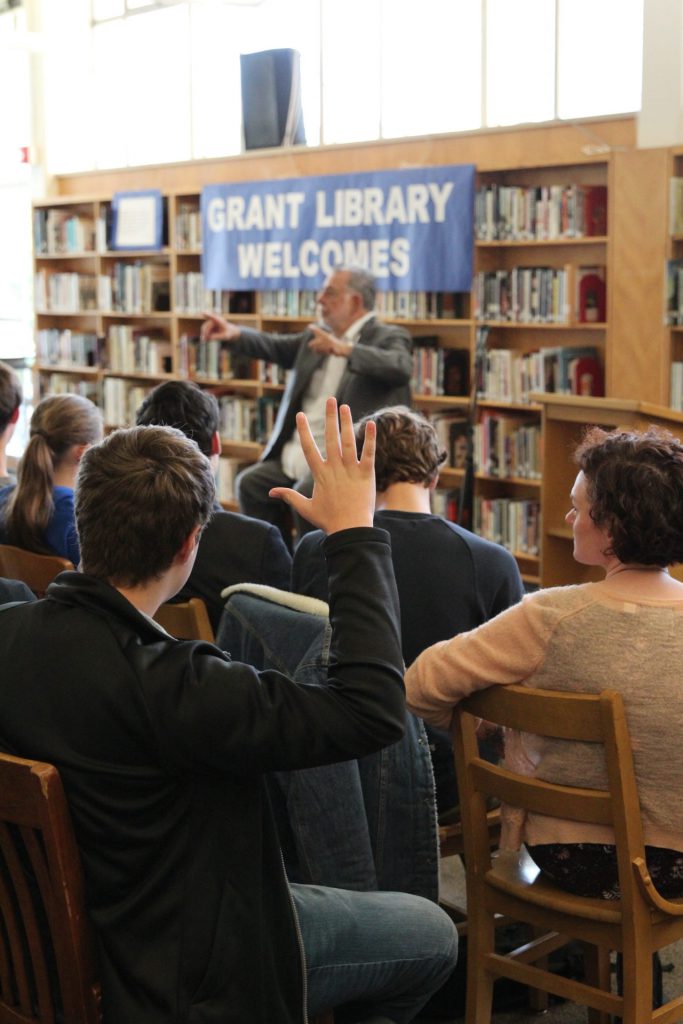 On the afternoon of October 2, 2017, legendary director Francis Ford Coppola visited Grant High School, an author visit facilitated by Youth Programs at Literary Arts.  Coppola sat at ease in front of 86 Grant High School students, and started right out telling them that high schools and junior high schools are his favorite places to speak. He proceeded to share stories from his own life as a student. He said that he went to 22 different schools, so he was always the new kid, an outsider, and had a funny name at that.

Coppola then proceeded to suggest many ways that he and the students could talk about his work. He’s a natural storyteller, and started off all of his golden bits of hard-core film-making information with stories. These included that he first wandered into theater in high school because that was where the girls were, and that it was because his revered brother was a novelist that he decided that he too would write (and here he cited other notable brothers-in-letters William and Henry James, and Thomas and Heinrich Mann.)

He enriched the talk about his own work with not only literary references — James Joyce, Gustav Flaubert, Stendahl, Virginia Woolf — but with sincere encouragement for students of the arts: that it is viable to make a living in the arts and that one must honor the artistic instinct in the face of heartbreaking rejection; that the biggest mistake is to make a film that doesn’t show who you are personally; and that you should do all the things you love because, by the time you choose one to focus on, they will all be relevant. He spoke at length about the fundamental connection between directing and acting, saying that good directors are coaches. When asked about working with difficult actors, he said he’s learned that difficult actors are afraid, and to remember that.

Coppola spoke with an easy, conversational tone imbued with a humor as well as a sense of wonder. Students were quiet and focused, and when, for the second half of his visit, he asked they wanted to talk about, the questions were varied. His favorite movie: too many good ones to choose, but he then mentioned a little known Polish film called Ashes & Diamonds. He returned to discussing his film Rumblefish several times, including when asked what about a favorite movie he’d directed.  When asked about the connections with other art forms, he spoke at length, finally saying, “Whatever you’re interested in is relevant.” He spoke of identifying a core theme to a movie and using it as a point of reference when making decisions. A book he’d like to make into a movie: Little Women, which he read recently, although it’s already been made into a movie, and a good one, and he doesn’t like re-makes.

Each student’s question was treated as a conversation, with careful back-and-forth. At the end, when Coppola was informed he had time for one more question, he objected. “Look at all the hands up!” He then proceeded to get to the last nine or ten questions, responding with quick, to-the-point answers which, given his generosity up to then, felt thought-out and personal.

His advice to young writers:  “Establish a writing practice. I write in the morning, before my feelings get hurt. It’s hard to write when your feelings are hurt.’