Her demeanor is consistent between a performance hall and a high school library. However, the customary PAL high school author visit was slightly different for Westover. The absence of conventional schooling is large part of Westover’s story, and at Franklin, a student asked about it.

“You mean how does it feel to be around teenagers? It’s weird,” Westover admitted. The only young people she’d really known growing up were her own siblings. However, if Westover was nervous, it was not apparent in her answers. After the initial swell of awkward silence, the session became naturally conversational.

The students did inquire about Westover’s book, but they seemed more interested in her identity. These elements are essentially one in the same for a memoirist, but Westover was accessible and honest about her experience. It seemed that the students genuinely wanted to get to know her. Westover is also young; she wrote Educated when she was 28. She urged the Franklin students to dispel the assumption that memoirs can only be written toward the end of life.

A student asked if any memories had surfaced during the writing process. Westover said that she is not a “memory fundamentalist,” and knows she could be wrong. She trusts the 25 childhood journals that she read while writing her story, and included footnotes of family members’ differing recollections in her book. Westover added that getting the truth out of her parents could be a challenge, and when it did come, it was grounded in the mythology that fueled their fundamentalism. Countering their fundamentalism with her own, she said, didn’t seem productive.

Westover shared an anecdote about her first experience in a big city, for her, it was London. She’d read Harry Potter, and London and Hogwarts held the same amount of possibility in her mind. She didn’t know much about either, therefore, their realities were equally likely. She made a decision when she visited King’s Cross Station and saw the prop trolley stuck into the “Platform 9 3/4” wall, surrounded by eager tourists and wizard enthusiasts. “Ah,” she reminisced. “London, real. Hogwarts, fake.”

Westover possesses a unique ability to embrace what she doesn’t know as an opportunity, instead of a deterrent. Her story illuminates different kinds of knowledge, the experiences that bring them to fruition, and the understanding that all knowledge is valuable. Westover responded genuinely when a student asked if she wished she’d had a different childhood. “To wish I’d lived a different life is to, in a way, wish myself out of existence. And I don’t wish that. I’m glad I exist.” 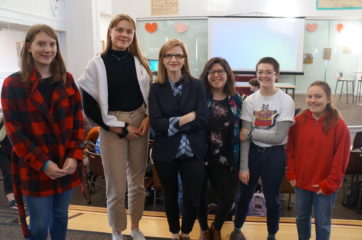