On March 14, Literary Arts will host acclaimed author, poet, and playwright Chimamanda Ngozi Adichie during Multnomah County Library’s 2019 Everybody Reads program. In addition to her sold-out event at the Arlene Schntizer Concert hall, Adichie will be visiting with students at Gresham and Jefferson High School.

Please note that the March 14 event with Adichie is SOLD OUT. No tickets are available. Sign up for our monthly email newsletter to be among the first to know about our events. 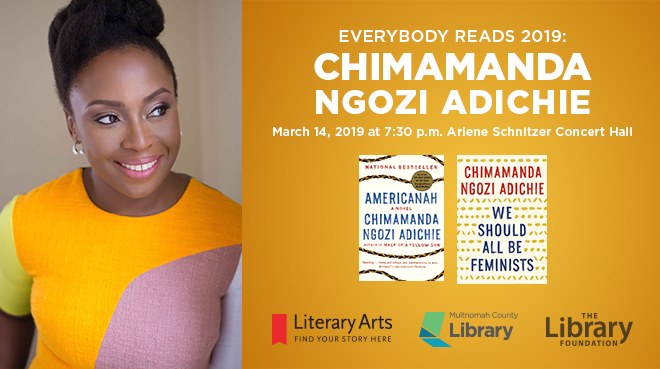 Chimamanda Ngozi Adichie was born in Enugu, Nigeria in 1977, the fifth of six children. She grew up in Nsukka, in a house formerly occupied by the Nigerian writer Chinua Achebe. Her mother, Grace Ifeoma, was the first female registrar at the University of Nigeria, where her father, James Nwoye Adichie, became Deputy Vice-Chancellor. She is Igbo, and her ancestral village is in Aba in Anambra State, where the family returns every Christmas.

Adichie attended the University of Nigeria’s secondary school, where she received several academic prizes. She attended the University for a year and a half to study medicine and pharmacy. Her plan was to become a psychiatrist and to use her patients’ stories in her fiction; this plan was thwarted by
her disdain for working with cadavers. During this time, she edited The Compass, a magazine run by the Catholic medical students.

In 2003, she earned a master’s in creative writing from Johns Hopkins University in Baltimore. She had begun work on what would become her first novel, Purple Hibiscus, while a senior at Eastern Connecticut. The book, about a wealthy Nigerian family and their brutal Catholic patriarch, was published in 2003. Widely acclaimed as a breakout debut, it was shortlisted for the Orange Prize for Fiction and won the Commonwealth Writers’ Prize for Best First Book and the Hurston/Wright Legacy Award for Best Debut Fiction.

A second novel, Half of a Yellow Sun, followed in 2006. Set before and during the Biafran war, it expands the scope of Purple Hibiscus beyond one Nigerian family into more levels of Nigerian society. Elle magazine declared it, “Brilliant. …That is what great fiction does—it simultaneously devours and ennobles, and in its freely acknowledged invention comes to be truer than the facts upon which it is built.” The novel was a National Book Critics Circle Award Finalist, a New York Times Notable Book, and won the Orange Broadband Prize for Fiction. In 2014, it was adapted into a film starring Chiwetel Ejiofor and Thandie Newton.

From 2005 to 2006, Adichie was a Hodder Fellow at Princeton University, and she earned a master’s in African Studies from Yale University in 2008. In 2009, she published a story collection, The Thing Around Your Neck. She attended Harvard University on a fellowship at the Radcliffe Institute for Advanced Study during the 2011–12 academic year, where she completed work for her third novel, Americanah (2013).

The New York Times Book Review said, “Americanah examines blackness in America, Nigeria, and Britain, but it’s also a steady-handed dissection of the universal human experience—a platitude made fresh by the accuracy of Adichie’s observations. …witheringly trenchant and hugely empathetic, both worldly and geographically precise, a novel that holds the discomfiting realities of our times fearlessly before us.” It won the National Book Critics Circle Award and was a New York Times Top Ten Best Book of 2013.

“The Danger of a Single Story,” her 2009 TED Talk, is one of the most viewed TED Talks of all time, with over 18 million views. Her 2012 TED Talk, “We Should All Be Feminists,” sparked a worldwide conversation on feminism, and was sampled by Beyoncé in her song “***Flawless.” In 2014, it was published as a book, and in 2015 it was distributed to every sixteen-year-old high school student in Sweden. In 2017, Dear Ijeawele, or a Feminist Manifesto in Fifteen Suggestions followed, a book based on a letter she wrote in reply to her friend’s request for advice about how to raise her daughter as a feminist.

Adichie is also a MacArthur Foundation fellowship recipient, and in 2017 was elected to the American Academy of Arts and Sciences. Her books have been translated into over 30 languages, and her writing has appeared in The New Yorker, Granta, The O. Henry Prize Stories, the Financial Times, and Zoetrope. President Barack Obama called her “one of the world’s great contemporary writers.”

She is married and has a daughter. She divides her time between Nigeria, where she teaches writing workshops, and the United States.

Thank you for the following event sponsors: