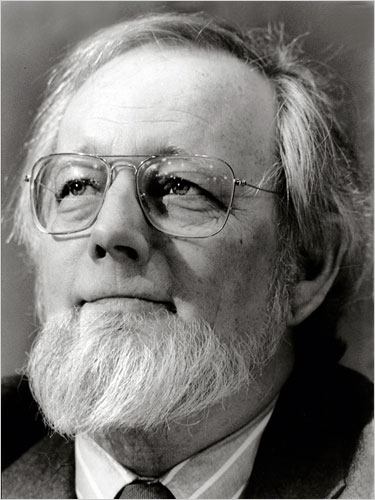 Donald Barthelme discusses and reads a selection of stories touching on family life, city life, and authentic vs. synthetic experience.

In this episode of The Archive Project, Donald Barthelme begins his lecture with a series of readings, including a story about his family’s quest for a dog, his reflections on being a father, a study of angels, and a conversation with Goethe in which he compares music, art, and nationalities to everyday objects. Barthelme previews a selection of excerpts from his forthcoming novel The King—a retelling of Le Morte D’Arthur through the lens of World War II—which at the time he not yet named and which was posthumously published in 1990. He returns to a discussion of the short story form following this, tackling the subject of life in New York and revisiting the subject of parenthood.

“You must not confuse the monster in the story with the monster you see before you; they are two different monsters.”

“It seems to me that in the contemporary world we suffer from something called information sickness; that is, the point is to push away experience, much of it unwanted vicarious experience and much of it synthetic and contrived by other people to manipulate us. If I thought there was any authentic experience to experience, I would probably recommend that—but I’ve seen very little of it.”

Donald Barthelme is a short story writer and novelist who is considered to be critical to the post-modern school of writing, in the company of such writers as John Barth, John Hawkes, William Gass, Robert Coover, and Thomas Pynchon. Recognized for his technical experimentation and melancholy gaiety, Barthelme first rose to national prominence when his debut novel, Snow White, was printed in its entirety in The New Yorker, taking up virtually the entire issue. He later received the National Book Award for his 1972 children’s book, The Slightly Irregular Fire Engine or the Hithering Thithering Djinn. In addition to his stories and novels, Barthelme served as a reporter for the Houston Post, the managing editor for Location magazine, and the director of the Contemporary Arts Museum in Houston. He also co-founded the literary magazine Fiction with Mark Mirsky, Max Frisch, and Marianne Frisch. In his New York Times obituary, the paper remarked that his “minimalist style placed him among the leading innovative writers of modern fiction.” Barthelme died on July 23, 1989, less than six months after his lecture in Portland, OR.