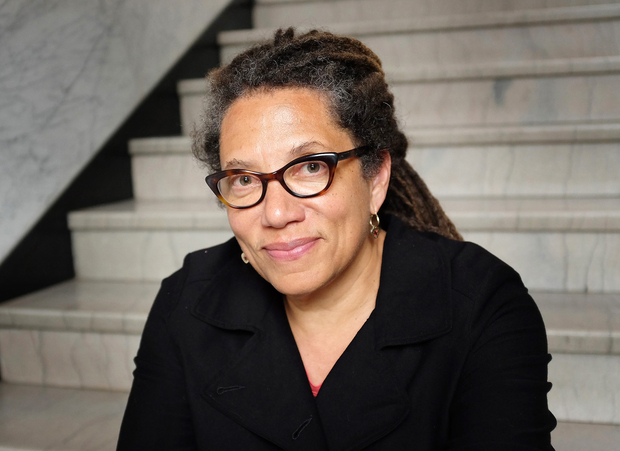 Nikky Finney, the 2011 National Book Award winner for poetry, tells a full-house audience that her grandmother’s words have always guided her work as a poet: “To tell a lie is a sin of the highest order.” She gives extensive, fascinating introductions for each of her long-form narrative poems before performing them. Her subjects include family ties, the writing life, oppression, maternity, solidarity, class disparity, and the plight of Black women in America. Both her poems and her commentaries about them are powerful and moving.

“The influence of my grandmother, who was a farming woman in South Carolina, who probably went as far as the tenth grade or so, but who was the most brilliant woman I ever knew, because she mixed her head knowledge with her belly knowledge, and she never let me forget that. And she did make me tell the truth—or else. And I’m still trying to do that with my work. I’m really trying very hard not to skirt the hard things, but to still say them as beautifully as I know how. Because, who needs someone to rant up on a podium? None of us. But who needs somebody at a podium and a microphone to tell the truth for once: we all do. So I thank my grandmother, every day of my life, for not letting me off easy in that way—because I see so many people lying easily today, like it means nothing.”

“I read poetry in Philly for the first time ever. She started walking up, all the way, from in back of the room. From against the wall she came, big coats, boots, eyes soft as candles in two storms blowing. Something she could not see from way back there, but could clearly hear in my voice. Something she needed to know before pouring herself back out, into the icy city night. She came close, to get a good look, to ask me something she found in a strange way missing, from my black woman poetry. Side stepping the crowd, ignoring the book signing line, she stood there waiting, for everyone to go, waiting like some kind of representative. And when it was just the two of us, she stepped into the shoes of her words: ‘Hey,’ she said. ‘You write real soft, spell it out kind. No bullet holes, no open wounds in your words; how do you do that? Write, like you’ve never been hit before.’ I could hardly speak, all my breath held ransom by her question.”

Nikky Finney was born in South Carolina, within listening distance of the sea. A child of activists, she came of age during the Civil Rights and Black Arts movements. At Talladega College, nurtured by Hale Woodruff’s Amistad murals, Finney began to understand the powerful synergy between art and history. Finney has authored four books of poetry: On Wings Made of Gauze (1985), Rice (1995), The World Is Round (2003), and Head Off & Split (2011). The John H. Bennett, Jr. Chair in Southern Letters and Literature at the University of South Carolina, Finney also authored the fiction work Heartwood (1997), edited The Ringing Ear: Black Poets Lean South (2007), and co-founded the Affrilachian Poets. Finney’s fourth book of poetry, Head Off & Split, was awarded the 2011 National Book Award for poetry.