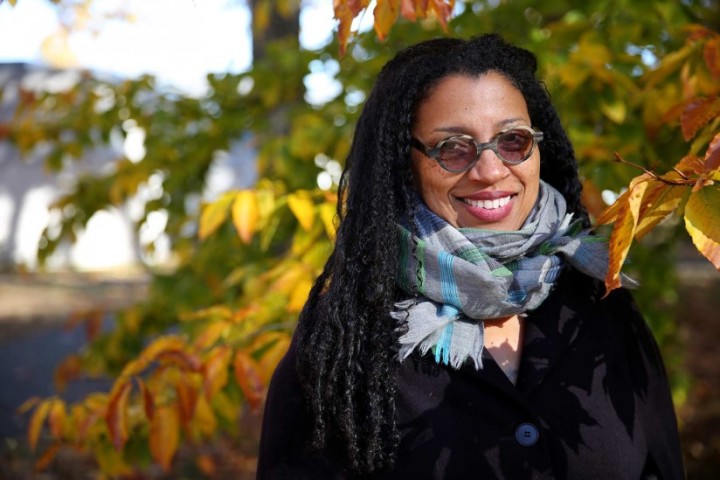 Click here to view the slideshow Lewis references during her lecture.

In this episode of The Archive Project, poet, scholar, and National Book Award winner Robin Coste Lewis presents on “The Race Within Erasure.” Lewis first became widely known in 2015, when her debut poetry collection, Voyage of the Sable Venus won the National Book Award in poetry –– it was the first time a poetry debut by an African-American had ever won the prize, and the first time any debut had won the award since 1974.

Lewis’s career as an academic and poet brings language and visual art, and their histories, to bear on questions of race and gender, both now and in the past. In this talk, Lewis focuses on a writing practice called “erasure” which is essentially the act of creating a new work out of an existing one by deleting text. She gradually widens this lens to talk not only about erasure in literature, but about how history is recorded, remembered or erased; how the humanities are taught; which stories are published and read, and how this shapes our understanding of our society and our worldview.

Throughout her talk, Lewis toggles between the past and present, celebrates writers both famous and obscure, challenges a cannon that is missing far too many writers of color, and surfaces ideas, stories and voices that are essential, especially right now.

“I had read every book placed before me, but in all those twelve years of my so-called education, I had never heard the name of one black woman novelist. I had never read a novel or short story by any black woman. Worse, I didn’t even know there was such a creature as a black woman who could write fiction. We knew, incorrectly, that there had been a few poets—in fact, there had been hundreds. But we learned this correction from the adamant literary commitment of our great migration working class families, not from our schools, teachers, textbooks, nor our school districts. Which is to say that at the time I went to high school—which is not so long ago, mind you—it was possible to earn a high school diploma in the United States without any knowledge whatsoever about the literary traditions of Americans of color.”

“As readers, it is our responsibility to pay attention to everything in a book—not only the way a writer wants us to read her project, but we should also attend scrupulously to the parts of the book to which the writer is wholly unaware.”

“Like a photograph, a poem or story erases what is outside of its frame—but here’s the curious part, also like a photograph, it captures the unintended, and sometimes that turns out to be the most engaging part of a text: its accidents.”

“Erasure is a collaboration of time and intent. Erasure often erases intent. Ironically, sometimes by removing text from its source, erasure can even magnify the original writer’s intent. When it is really, really, really good, erasure can reveal more about the projects of both writers.”

Robin Coste Lewis was born in Compton, California. When she was six, she told her mother that she wanted to be a writer. At the time, she thought this could only mean being a novelist. In pursuit of that goal, she studied comparative literature as an undergraduate, attended NYU’s Creative Writing Program, and earned a master’s degree in Sanskrit and comparative religious literature.

Everything changed for Lewis after she had an accident that caused her permanent brain damage, keeping her bed-ridden for two years. As part of her long recovery, her neurologist limited Lewis to reading and writing one sentence a day. It was physically painful for Lewis to read and write, so she decided, “OK, if it’s one line a day, it’s going to be a goddamned good line.” It was at this time that she realized she was a poet.

Her debut collection, Voyage of the Sable Venus and Other Poems, won the 2015 National Book Award for poetry. It was the first debut book to be awarded the prize since 1974. The book is a triptych: Lyric poems exploring desire and race bookend the title piece, which is made up of titles, catalog entries, and descriptions of art depicting the black female figure from 38,000 bce to the present day. The citation from the National Book Foundation praises Voyage by stating, “In poems that consider the boundaries of beauty and terror, Lewis intimately involves us with all that has formed her. The aesthetic and psychological complexity of this work is underscored by its clarity. This voice is essential to our present moment.”