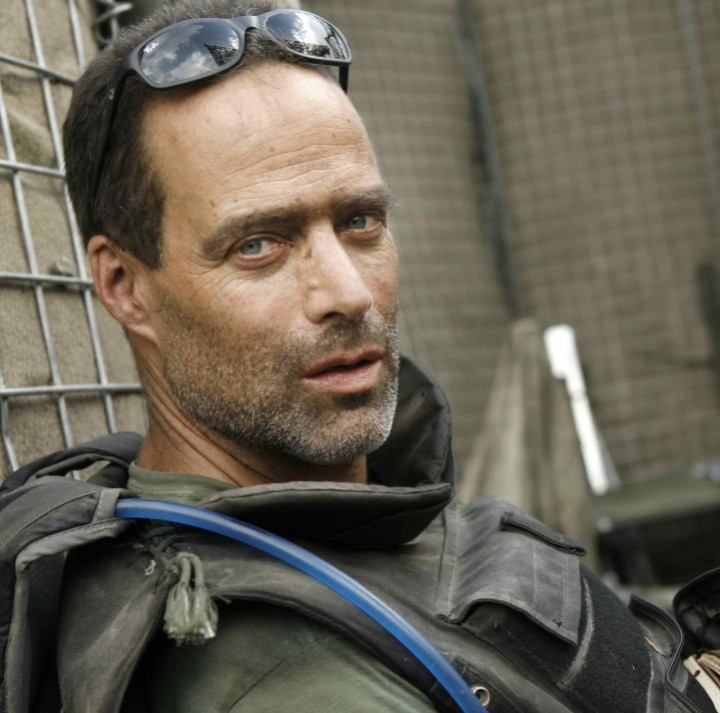 “There are two things that we all have complete control over, that can’t be taken away from us, and that you’re not born with: courage and compassion.”

Journalist and documentary filmmaker Sebastian Junger begins his lecture by stating that he had no idea he was going to be a war reporter. Starting out as an anthropology major, Junger spent several years as a tree-climber until he cut open his leg with a chainsaw and began questioning his path in life. “There was a war in Bosnia,” he says, “and I just went.”

Junger talks about his work reporting on combat in Afghanistan just before and during the U.S. invasion and how this intense experience informed both his writing and his life. He notes his own strange fascination with war, which fuels his war reporting, explaining it as a desire to understand why humans think war is both horrifying and entertaining. Specifically, Junger shares anecdotes about his experience with a unit in the Korengal Valley of Afghanistan, famous for being the most combat-heavy area in the Afghan War, giving vivid description of combat and every man’s brushes with death, including his own. Throughout the evening, Junger delves into the complex nature of war, the brotherhood that develops amongst soldiers, and society’s responsibilities to these soldiers.

Sebastian Junger is the internationally acclaimed bestselling author of The Perfect Storm, A Death in Belmont, and Fire. As a contributing editor to Vanity Fair and a contributor to ABC News, he has covered major international news stories in Liberia, Sierra Leone, and other locations around the globe. He has been awarded the National Magazine Award and an SAIS Novartis Prize for Journalism. The Perfect Storm stayed on the New York Times’ bestseller list for more than three years, set sales records, and became a major motion picture from Warner Bros.

For over a year, Junger and photojournalist Tim Hetherington embedded with the battle company of the 173rd Airborne Brigade Combat Team in the remote and heavily contested Korengal valley of eastern Afghanistan. Reporting on the war from the soldiers’ perspective, Junger spent weeks at a time at a remote outpost that saw more combat than almost anywhere else in the entire country. The professional result is twofold: the book WAR and a documentary, Restrepo, that won the 2010 Grand Jury Prize at the Sundance Film Festival.

Junger’s work has also been published in Harper’s, The New York Times Magazine, National Geographic Adventure, Outside, and Men’s Journal. He has reported on the LURD besiegement of Monrovia in Liberia, human rights abuses in Sierra Leone, war crimes in Kosovo, the peacekeeping mission in Cyprus, wildfire in the American West, guerilla war in Afghanistan, and hostage-taking in Kashmir. He has worked as a freelance radio correspondent during the war in Bosnia. He ccurrently lives in New York City and on Cape Cod. (source: www.sebastianjunger.com)

“That is what makes war so complicated. You can’t package it in a neat liberal or conservative package and dispense with it. War insists on being puzzled over and engaged with. It’s incredibly elusive. It’s like love, like one of these things that’s eternal and ancient and completely elusive, and you’ll never fully understand it.”

“There are two things that we all have complete control over, that can’t be taken away from us, and that you’re not born with: courage and compassion.”