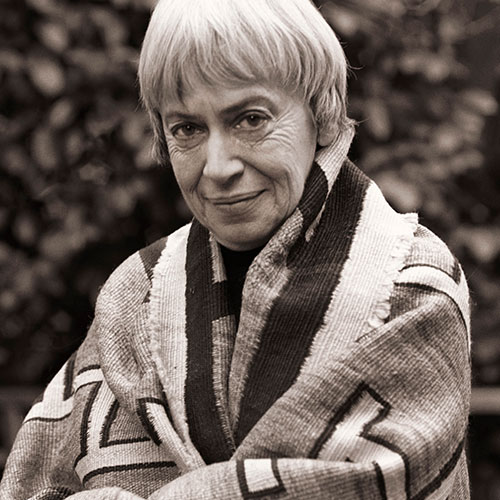 In collaboration with the Le Guin family, Literary Arts invited the public to join in honoring the life and work of Ursula K. Le Guin.

This live event, presented in Portland, Oregon on June 13, 2018, featured tributes from writers and friends who represent the wide-ranging influence Le Guin has had on international literature for more than 50 years, including Margaret Atwood (by video), Molly Gloss, Walidah Imarisha, Jonathan Lethem, Kelly Link, China Miéville, and Daniel José Older. Andrea Schulz, Le Guin’s editor at Harcourt, and Julie Phillips, Le Guin’s biographer, also spoke at the tribute. The tribute included rare documentary footage of Le Guin, along with photos and images from her life and work. The full event is available to watch online here.

As a genre-defying writer, Ursula K. Le Guin authored more than 50 works, including novels, poetry collections, and children’s books that explore issues of race, gender, and environmentalism. Her books have been translated into more than 40 languages and have sold millions of copies worldwide. Her many honors include the Hugo, Nebula, National Book Award, and PEN-Malamud. In 2014, she was awarded the National Book Foundation Medal for Distinguished contribution to American Letters.

While her speculative fiction urged readers to explore new worlds and distant futures, Le Guin was an active guardian of her writing community and her home state of Oregon. She was an ardent supporter for writers and independent publishers and actively used her platform to defend free speech. Le Guin was involved with Literary Arts for 31 years, as a participant, trusted advisor, and ardent supporter. Her dedication helped shape Literary Arts’ programs that serve more than 20,000 readers and writers each year.

Molly Gloss is a fourth-generation Oregonian who lives in Portland. She is the bestselling author of The Jump-Off Creek, The Dazzle of Day, Wild Life, The Hearts of Horses and Falling From Horses. Her work has earned numerous awards, including an Oregon Book Award, a Pacific Northwest Booksellers Award, the PEN West Fiction Prize, the James Tiptree Jr. Award; and a Whiting Writers Award.

Walidah Imarisha is a writer, organizer, educator, and spoken-word artist. She is the author of the poetry collection Scars/Stars, the nonfiction Angels with Dirty Faces, and co-editor of Octavia’s Brood: Science Fiction Stories from Social Justice Movements. She has facilitated writing workshops at schools, community centers, youth detention facilities, and women’s prisons.

Jonathan Lethem is an American novelist, essayist, and short story writer. His works include his début novel Gun with Occasional Music, a finalist for the 1994 Nebula Award; Motherless Brooklyn, winner of both the National Book Critics Circle Award and the Macallan Gold Dagger for crime fiction; and The Fortress of Solitude, a New York Times best-seller. His writing has appeared in The New Yorker, Harper’s, Rolling Stone, Esquire, and The New York Times. Lethem is also a 2005 recipient of a MacArthur Fellowship.

Daniel José Older is the New York Times bestselling author of Salsa Nocturna, the Bone Street Rumba urban fantasy series, and the Young Adult novel Shadowshaper, a New York Times Notable Book of 2015, which won the International Latino Book Award and was shortlisted for the Kirkus Prize in Young Readers’ Literature, the Andre Norton Award, the Locus, the Mythopoeic Award, and named one of Esquire’s 80 Books Every Person Should Read.