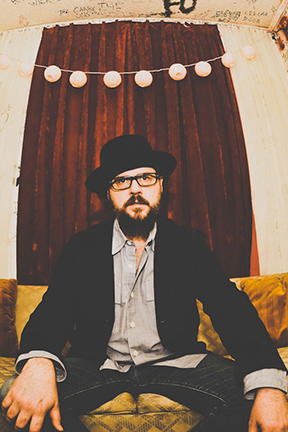 Patterson Hood is best known as a frontman, singer, songwriter and guitar player for the critically acclaimed rock and roll band Drive-By Truckers. He is also a writer of essays, columns and short stories.

He recently wrote an op-ed on the on-going controversies surrounding the confederate flag for The New York Times Magazine and an upcoming piece on Vic Chesnutt for The Oxford American‘s annual music issue.

Patterson is a prolific writer and performer. Drive-By Truckers have released 12 albums and played over 2,000 shows in the past nineteen years. They are releasing a 35 song, career spanning box set in fall of 2015 that was recorded live at The Fillmore in San Francisco.

Patterson has also amassed 3 solo albums and co-produced or played on additional albums by Bettye LaVette, Booker T. Jones and The Dexateens.

As a speaker and lecturer he has spoken or conducted classes at Princeton, The University of Indiana, The University of Georgia and The University of Alabama. He has been invited to speak at the Frank and Kula Lumpuris Distinguished Lecture Series at the William J. Clinton Presidential Center in Little Rock, Arkansas which will take place in the fall of 2015.

Hood was born and raised in Florence Alabama, in what is known as the Muscle Shoals area. He lived for twenty one years in Athens, Georgia but recently relocated with his family to Portland, Oregon.

Drive-By Truckers’ best known work is a concept album called “Southern Rock Opera” which examined growing up in the post civil rights south and something called “the duality of the southern thing”. Patterson revisited many of the same themes in an acclaimed essay he contributed to The Bitter Southerner in the summer of 2013.

Next year, Patterson will have his first short story published in a car-themed crime fiction anthology called The Highway Kind: Stories of Cars and Crimes. Additionally, he will be writing and touring both solo and with his band as well as working on the next Drive-By Truckers album.