The Sarah Winnemucca Award in Creative Nonfiction was judged this year by Kyoko Mori. Mori is the author, most recently, of the memoir Yarn: Remembering the Way Home (2009). She has also published a book of essays, a memoir, and three novels. Her work has appeared in The American Scholar, The Missouri Review, Harvard Review and elsewhere.Here are her comments on this year’s finalists:

Carol Ann Bassett’s account of her stay in the Galapagos Islands in 2007 is both spirited and thoughtful. She combines an impressive amount of historical and scientific research, present-day journalistic research, and personal narrative in a book that is as lively and complex as the eco system she explores. She is an intrepid traveler and interviewer. She also understands that no human can hope to be transparent or impact-less. As soon as she moved into her house in Puerto Ayora and encountered the swarms of mosquitoes that potentially carried dengue fever, the narrator herself was an invader encountering a more established invasive species. Ms. Bassett’s discusses the complex ethics of the situation with great clarity.

Tom Bissell writes with wit about his beloved video games—one of which caused him to miss the historic presidential election of November 4, 2008. Starting with the explanation he provides to his (as yet) imaginary children about why the arrival of Fallout 3 caused him to spend seven hours in front of his TV screen with the video game instead of the election coverage, Mr. Bissell plays with, as well as parses, the distinction between the “real” and the “imaginary.” He informs the reader about the designs of various video games, the history of their popularity and their marketing. Especially compelling are his own stories about playing the games and his meditations on the human needs to be told a story and to control the outcome of the story. 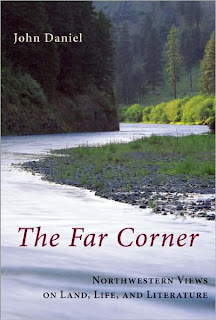 John Daniel, The Far Corner
The eighteen essays in John Daniel’s The Far Corner are impressively wide-ranging. They inform us about the natural history of rivers and forests, the literary history of the Northwest, and the personal history of a writer, hiker, naturalist, son, teacher, student, husband, and citizen. Mr. Daniel’s writing is at once precise and lyrical—equally compelling in passages that present ecological facts and in those that portray the elusive workings of memory, grief, or joy. From its opening description of the daily labor of the tree fallers that “never seemed to advance very far against the front of the forest” but turned “the standing woods into pick-up sticks,” the book astonishes the reader with its complex observations about time and place, the relentless industry of humans and the forces of nature that cannot remain inviolable. Mr. Daniel writes eloquently about duality, paradoxes, and wholeness. The source of every stream on earth is a river in the sky. The fawn who survives the growing season to become “a young deer eligible for winter, a member of this country” breathes for himself and also for his dead twin—as a son practices the art of memory and story-telling learned from his mother. The book celebrates rootlessness and rootedness, the exuberant imagination of Ken Kesey’s writing and the spare beauty of Wallace Stegner’s, the solace of solitude and the rewards of community. While each essay stands alone brilliantly, the collection resembles one of its main metaphors: a river of heaven and earth, drawn from a multitude of living streams.

Lisa Ohlen Harris, Through The Veil
In writing about the years she lived in the Middle East, Lisa Ohlen Harris displays her skills as a trained ethnographic observer and as a memoirist. In one single sentence, she can present facts, evoke a sense of irony, build suspense, and communicate the absurdity of the situation: “Carrying that symbol of peace [an olivewood dove from an evangelical Christian bookstore in Jerusalem] wrapped in tissue paper, I came out of the shop and stepped off the curb to avoid an Israeli soldier with machine gun ammunition draped across his chest, like the banner of a beauty queen.” Her portraits of the women she encountered are respectful, empathetic, and yet unflinching. She does not hide her own confusion when a woman who seemed to befriend her seemed puzzlingly distant—only to write to her years later about how her departure had broken her heart. Some things will always remain a mystery, like the blue eyes of the veiled women who surrounded her in a market place in Damascus. The book leaves these mysteries intact while shedding light on all it can. In addition to the compelling portraits it offers, the book’s ultimate strength is in its ability to imagine and understand how the American narrator might have come across to the people she encountered.

Kathleen Dean Moore, Wild Comfort
In spite of the deaths of her friends and the possible near-future extinctions of the wild creatures she loves, Kathleen Dean Moore organized her book of essays into three sections: “Gladness,” “Solace,” and “Courage.” This is not to say that she avoids the topics of grief, fear, loss. “Solace” implies the presence of grief and sorrow, and “courage” is necessary only in the face of danger. Even her portrayal of “gladness” is never simple or ordinary. The book begins with the act of putting “door-sized scraps of corrugated metal roofing” along the fencerows of her property to provide shelter to snakes. Gladness is found equally in the tangle of snakes and in the nests of mice and voles—creatures that will no doubt become food to the snakes. After her father-in-law’s death, the narrator recalls the story of the make-shift snorkel he’d made as a young man from a galvanized tin bucket welded to a defunct window, a long hose, and a bicycle pump—a devise he used to walk on the bottom of a river while his friends in a rowboat pumped air into the bucket to keep him breathing. The device is an apt metaphor for the remarkably inventive nature of this book.