Ooligan Press is a general trade publisher located in Portland, Oregon. Founded in 2001, Ooligan is staffed by students pursuing master’s degrees at Portland State University, guided by a core faculty of publishing professionals. PSU recently hired a new Director of Publishing, Per Henningsgaard, who was kind enough to answer our questions about publishing, literary community, and his new gig with Ooligan. 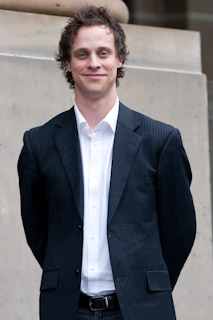 Is part of Ooligan’s mission to promote local writers?

PH: Ooligan Press is a general trade publisher rooted in the rich literary tradition of the Pacific Northwest, so, yes, definitely it is part of our mission to promote local writers.

As a newcomer to Portland, how does this city’s literary community compare to the one you’re coming from (in Stevens Point, Wisconson)?

You’ve worked in publishing in NYC and studied publishing in Western Australia. What were some notable similarities and/or differences between the two countries’ publishing industries and literary communities?

PH: Writers and publishers in New York City seem to believe that they are at the center of the writing and publishing world.  It’s not egotistical so much as self-absorbed. Indeed, I think many Americans with an invested interest in the literary arts operate under a similar assumption, though it may go unrecognized. By contrast, in Australia, there is this awareness of being marginal that seems to give writers and publishers (and readers!) a sense of purpose–to write and publish and read Australian literature (because if WE don’t do it, who will?!), while at the same time staying always on top of overseas developments.

Before coming to Ooligan Press, you worked with another student-run indie publisher (Cornerstone Press) at the University of Wisconsin. How do these programs compare and contrast?

PH: Cornerstone Press was staffed by undergraduate students, and it was a stand-alone course in an English Department with no other publishing offerings. Meanwhile, Ooligan Press is staffed by graduate students who are enrolled in a two-year master’s degree in publishing. In this respect, they are very different beasts, but both have turned out an impressive catalog of titles. For example, Ooligan Press has won numerous design awards for its books, and one of its titles, the young adult novel Ricochet River, has sold over 10,000 copies and is regularly taught in Oregon schools, while Cornerstone Press published the first book by New York Times bestselling novelist Patrick Rothfuss.

Do you see student-run Independent presses as a publishing model that could expand to other universities in the future?

PH: Absolutely, I think there’s a lot of opportunity for this model to be picked up by other universities.  Interested parties should check out the Ooligan Press title Classroom Publishing: A Practical Guide for Teachers!

How do you think independent publishers will be a part of the future of the book?

PH: I think independent publishers with a regional mandate will have a particularly vibrant role to play in the future of the book, pushing back against the sometimes homogenizing effects of the multinational conglomerates.

What’s the best way for writers to submit their manuscript to Ooligan Press? Is there anything specific that you’re looking for?

PH: All the details can be found at our website, ooligan.pdx.edu. As for what we’re looking for, we like to be surprised!

What question do you wish we’d asked you?

PH: I wish you’d asked what my favorite book is. Because I never get tired of that question after I tell people I’m an English professor!

[Follow-up question] So what is your favorite book?

PH: Favorite book? It would have to be How to Talk About Books You Haven’t Read by Pierre Bayard. Fittingly, I’ve never read it.