2013 Oregon Book Awards Finalist
Once Upon a Toad by Heather Vogel Frederick
Category
Children’s Literature
Publisher
Simon & Schuster
Description
As if middle school weren’t bad enough, things go toadally awry when an occupationally-challenged fairy godmother mixes up a spell and a sixth-grader suddenly finds herself spouting toads…
An excerpt from Once Upon a Toad
I was just sitting down at the kitchen counter with a bowl of cereal when my little  brother appeared, clutching his smelly blanket.
“Hey, G-­‐Man, how about some breakfast?” I asked.
Something plopped into my bowl, sloshing milk onto the
counter.  Geoffrey’s eyes widened.  He pulled his index finger from his mouth, which was shaped in an O of surprise, and pointed at my breakfast.  “Cat?” he whispered.
I glanced down and nearly fell off my stool.  An equally surprised-looking toad was crouched in my cereal, staring back at me.
“Whoa!” I cried in astonishment.
Plop.  Another toad joined the first one.  The two of them splashed frantically in the bowl, trying to escape.  Geoffrey stared at them, then at me.   His face got that worried look it always does when he’s about to cry.  Or barf.
No way, I thought.  Absolutely no way had I just made that happen!  It would be completely crazy to think that those toads had anything to do with me.  And just to prove it, I said my brother’s name out loud.
“With a G,” he added automatically as toad number three tumbled into the bowl…
About the Author 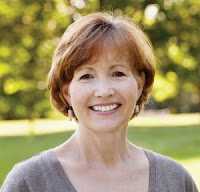 Heather Vogel Frederick is the author of more than a dozen books for young readers, ranging from historical fiction to fantasy, fractured fairy tales, contemporary realism, and picture books. Her work has been honored both nationally and internationally and translated into numerous languages. She lives in Portland with her family.
Praise for Once Upon a Toad
“In this enjoyable twist on a Charles Perrault fairy tale . . . Frederick keeps readers entertained with an action-packed, zany plot and an even wackier cast.”
— The Horn Book Magazine
“For fans of fantasy and fairy tales, this is a gem.”
— School Library Journal
“Fans of Frederick’s The Mother-Daughter Book Club should thoroughly enjoy this modern version of an old fairy tale.”
— Library Media Connection
A light-hearted read, sure to entertain no matter what your taste–flowery or toad-ally gross.”
— Yankton Daily Press and Dakotan
Suggested Links
Heather Vogel Frederick’s Website
Mother Daughter Book Club Interview with Heather Vogel Frederick
Buy the Book
Powell’s Books
Indie Bound
Amazon.com