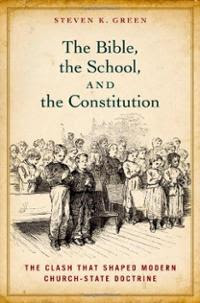 2013 Oregon Book Awards Finalist
The Bible, the School, and the Constitution by Steven K. Green
Publisher
Oxford University Press
Category
Nonfiction
Description
The Bible, the School, and the Constitution examines the nineteenth century roots of the legal conflict over prayer and Bible reading in the public schools and the public funding of religious schools.
An excerpt from The Bible, the School, and the Constitution
Since the 1940s the [Supreme] Court’s holdings on religion and education have fit neatly into two distinct categories: religious activities in the public schools (e.g. prayer, Bible reading, posting of the Ten Commandments, the teaching of religious alternatives to evolution), and the public funding of religious (parochial) schools.  But this categorization obscures the fact that these issues are, and have long been, interrelated.  For the nation’s first 150 years, controversies over school prayer and school funding were inseparable.  Comprehensive public education arose in the early nineteenth century chiefly as an alternative to private religious schooling.  Early reformers believed the new nation required a system of “common” schools to educate the great mass of American children in the rudiments of knowledge and the values of republicanism.  To accomplish this goal, the common schools had to be controlled by public officials, not religious agencies.  Another way early common schools distinguished themselves from the array of church-run schools was to assert their accessibility to children of all social classes and religious faiths.  To further that distinctiveness and attract a broad array of children, common schools emphasized their own form of religious instruction: “nonsectarian” education.  Though defying a single model, nonsectarian education involved instruction in widely held Protestant beliefs, in contrast to the more doctrinal instruction common in private religious schools.  As the nineteenth century progressed, external and internal pressures forced the religious character of nonsectarian instruction to evolve, such that over time it became less devotional and more rote.  Despite this gradual transformation, Catholics, Jews, and religious nonconformists still objected to the residual Protestant character of the public schools.  At the same time, conservative Protestants complained that the public schools were becoming secularized and “godless,” an assessment shared by Catholics.  The controversy over whether schools should inculcate moral and/or religious values, and the content of that instruction, would embroil public schools throughout the century.

About the Author
Steven K. Green is the Fred H. Paulus Professor of Law and Director of the interdisciplinary Center for Religion, Law and Democracy at Willamette University, where he teaches in the areas of Constitutional Law, First Amendment, International Religion and the Law, Legal History, and Religious History.
Praise for The Bible, the School, and the Constitution
“This is a long overdue history of the origins of secular public education.  Green’s carefully research discussion of the relationship between separation of church and state and public education is a powerful answer to scholars and jurists who have made ideologically-based and historically shaky arguments in favor of state supported religious exercise in the public schools.  Green’s work reminds us of the importance of Jefferson’s notion of a ‘wall of separation’ between the state and religion.” –Paul Finkelman, President William McKinley Professor of Law and Public Policy, Albany Law School
“Green reminds readers that modern Supreme Court rulings were not products of sudden secularizing trends in the 20th century, but rather were grounded in a more than century-long debate over the separation of church and state.  Highly recommended.” —CHOICE
“An impressive accomplishment.” —Journal of Church and State
Suggested Links
Steven K. Green’s Willamette University webpage
Buy the Book
Powell’s Books
Amazon.com