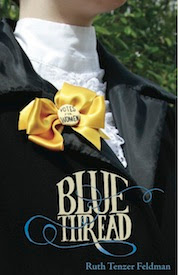 Description
When an ancient shawl takes Miriam from the woman suffrage campaign in 1912 Portland to a struggle for land in the biblical Middle East, who decides how much justice is enough?

An excerpt from Blue Thread
Papa would have been scandalized if he had seen how much of my petticoat and legs had been exposed in the wind.  Yet he had no trouble printing a petticoat on both sides of his VOTE NO card.
I vowed that this election would be different.  We women of Portland would distribute a suffrage card to make up for that disgusting one.  A VOTE YES card.  Designed by me.  Printed by Kirsten and me on Papa’s very own presses.  Yes, it was only fair.  It was right.  It was Miriam Josefsohn in pursuit of justice.
I barely noticed the rain.  My mind was elsewhere.  How many cards would we need?  When could we use the presses?  Who would sell us supplies and not tell Papa?  How could we smuggle that much paper into the office?  How would we distribute the cards?
My thoughts churned as relentlessly as a sternwheeler.  I stepped into the street.
I heard Mr. Jacobowitz yell, “Watch out!  Somebody stop her!”
I looked up.  Three huge, white horses galloped toward me at a furious pace.  I stood there, stuck to the cobblestones.” 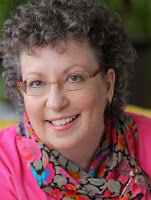 Praise for Blue Thread
Hooray for Miriam, just the kind of young woman I like–curious, compassionate, intelligent, independent, and determined.  Her story is told in Blue Thread, a wonderfully written novel about her struggle to be herself, to be honest, and to be just.  In an intriguing blend of fantasy and historical fiction, Miriam finds the battles of the past informing her present and inspiring her future.  I cheered her efforts, her courage, and her rewards.  And so will you.  –Karen Cushman, author of The Midwife’s Apprentice