MENUMENU
The winners of the Oregon Book Awards will be announced at the Oregon Book Awards ceremony on April 8th at the Gerding Theater at the Armory.
2013 Oregon Book Awards Finalist
Immaterial Matters by Steve Patterson
Category
Drama
Description
Immaterial Matters takes the audience on a wry, sepia-toned journey through small town America, circa 1880, as an orphaned, young adult Crane Wordsworth learns the craft of photography by recording images of the dead.  What begins by fulfilling the request of one grief-stricken family draws Crane into communication with the “other side,” in an intense and disturbing confrontation with life and love.
An excerpt from Immaterial Matters
MARY
My sister was a person of passion.  I fear I am not, which, at times, strained our relations.  Yes.  I can see where she might follow a clever, impressionable young man out the door.  Were she alive, sir, she might have taken hold of your heart.  Made it her own.  But once knowing it belonged to her, it would lose its luster, and soon she would abandon it for another.  If she haunts you, fear not.  With time, her gaze will wander.  That is unless in death, she’s finally learned the fragility of our hearts, now that she can no longer dangle hers like a shimmering charm.

That she would learn of love only when it was no longer hers to give.  That would be a fate of strange and terrible irony. 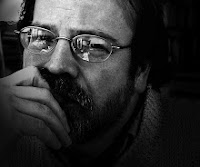 Steve Patterson has written over 50 plays, with works staged in Portland, New York, Los Angeles, Chicago, Tampa, and internationally.  His full-length works include: Bombardment, Altered States of America, Waiting on Sean Flynn, Liberation, Delusion of Darkness, and The Centering (with Chris Harder).  In 2008, his play Lost Wavelengths won the Oregon Book Award.