Mary Jo Bang was the judge in poetry  for the 2013 Oregon Book Awards. Her six books of poetry include Elegy, winner of the National Book Critics Circle Award. She is also the author of Apology for Want,  Louise in Love and The Bride of E. She was the poetry co-editor of the Boston Review from 1995 to 2005. She is a Professor of English and Director of the Creative Writing Program at Washington University, St. Louis, Missouri.

Here are her comments on the 2013 Oregon Book Awards finalists for the Stafford/Hall Award for Poetry.

These poems are perfect cocktails of knowledge, oddity, brevity, humor, and rhyme. They are surprisingly subtle and stand up to being read again and again. They also successfully belie the received notion that heavily-rhymed poems are only useful for nursery rhymes and light verse. With each rereading, these deftly rhymed poems seem smarter and smarter, and more wryly subversive.

Gertrude: poems and other objects by Toni Hanner 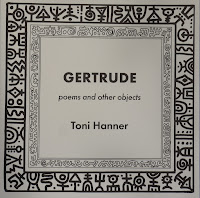 The stepping-off point for many of these poems is a love of Gertrude Stein and her language antics, especially those found in Tender Buttons. Other poems have an announced debt to surrealism, the early surrealism of Max Ernst and André Breton, and the contemporary surrealism of John Yau. To whatever she has received from those who came before, Hanner adds a lyric sensibility and creative intelligence that is entirely her own. Each of these poems convincingly makes the argument that poetry speaks best about the complicated experience of being human when it speaks with invention and indirection. 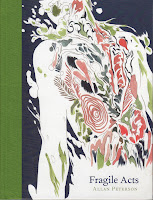 Fragile Acts by Allan Peterson
These poems rarely veer far from a well-defined reality that is often rooted in the natural world—fleabane, fish, fast clouds, osprey, and spider—but at the center of that world, and deeply embedded in it, is a thoughtful meditative speaker who both marvels at and raises insightful rhetorical questions about his place among so much mystery. His observing eye, as astute as the most finely-honed telephoto lens, is such that he’s able to transform even the ordinary into something so exquisite it provokes wonder and awe.

Perhaps it’s the odd deadpan-earnest tone the speaker uses to address those large lyric subjects—love, death, and the changing of seasons (which is, yes, simply death by another name)—that makes these small prose poems so distinctive, and so convincing. Who would say “From the very beginning, I knew exactly what would kill me” if he or she didn’t mean for such a statement, which openly flaunts its implausibility, to speak figuratively about something much larger than itself. Each of these poems is more than the language with which it’s been constructed. Each is a seedling that is meant to become a full-fledged allegory not on the page, but in the reader’s imagination. Schomburg intuitively knows exactly how much, and how little, it takes to conjure a sense of the ever-puzzling world.

These poems have an odd associative logic that seems absolutely earned. Seitzinger  understands that because the world is strange, eccentricity must be employed when talking about it. Otherwise, the poet risks being reductive, or falls into the trap of producing poetically pretty description that comes nowhere near capturing what it’s truly like to be alive in American at the cusp of the 21st century. The poems brilliantly represent the ongoing struggle to make sense of the intents and behaviors of the inscrutable others who surround us, while trying to simultaneously understand the even less fathomable self.