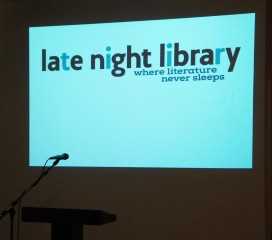 Late Night Library hosted Celebration Thursday with two authors from out of town, a local singer/songwriter, and a stand-up comic on December 5th at Literary Arts.

Claudia Zuluaga opened the event by reading an excerpt of her new novel, Fort Starlight (Engine Books, 2013). The book tells the story of Ida Overdorff and the strange community she finds in a Florida swamp, told with Zuluaga’s trademark hypnotic lyricism. Zuluaga’s fiction has appeared in Narrative Magazine, Lost Magazine, and Linnaean Street. She has a MFA from Sarah Lawrence College and has been nominated for the Pushcart Prize and Best American Short Stories.
Sarah Gerkensmeyer read from her short story collection, What You Are Now Enjoying (Autumn House Press, 2013). Gerkensmeyer is known for her fabulist fiction and magical realism. She read “Produce,” the story of a woman hired by a grocery store to cry on the vegetables and keep them fresh, as well as “Monster Drinks Chocolate Milk,” the narrative of a bedroom monster who had come to prefer drinking chocolate milk in the kitchen rather than terrifying children. Gerkensmeyer has a MFA from Cornell University and now teaches creative writing at SUNY Fredonia. Her work has appeared in several journals including Guernica, The Massachusetts Review,The New Guard, and North Dakota Quarterly. 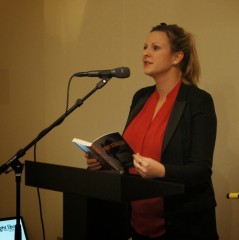 Next up were the dry and deadpan witticisms of comedian Jon Washington, the mastermind behind the website Jon Reads the Paper. His unassuming, self-deprecating style crept up and surprised the audience with humorous observations on the world of dating. “I sometimes go check out the Braille Museum when I’m in Paris,” he said into the microphone, “Just to feel something.”
The evening concluded with the tender and bittersweet music of Timmy Straw, keyboardist and lyricist. A longtime favorite of Late Night Library, Straw is a composer and writer. Thanks to Claudia, Sarah, Jon, Timmy and Late Night Library for such a delightful evening! 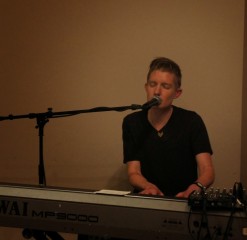