Prior to taking the delve seminar on F. Scott Fitzgerald, Fitzgerald’s written realms rich in extravagance, loneliness, excess, and dream-like melancholy had eluded me throughout high school and even during my years in college as a student of creative writing. When I saw the course was being offered, I felt it was my obligation to finally learn why and how Fitzgerald made his mark as one of the great American novelists. As a new student of Fitzgerald, I was skeptical. While I had never read the infamous The Great Gatsby, I recalled reading, or trying to read Tender is the Night and thinking, what’s all the fuss about? I couldn’t delve into the language or the mood like I felt I was supposed to, obligated to as a student and lover of writing and literature. I put that book down and never returned to Fitzgerald again, always with a feeling of slight guilt trailing behind me.

When the first meeting arrived, I arrived skeptical. Would my views on Fitzgerald be transformed? Would I grow into a savvy F. Scott intellectual? I was also excited. As each member of our group trailed in one by one, or in pairs (Mort and Audrey are married) my excitement increased. What a wonderful opportunity to talk about literature with people of different ages, professions, and interests. There was a surprising number of lawyers and there were writers, a retired nurse, and our leader, Lucas. We each spoke of our relationship to Fitzgerald—many had read The Great Gatsby several years ago and were taking the course to revisit it. We each had similar goals, mainly one simple goal—we wanted to learn more about the famous writer.

We began with Fitzgerald’s short stories found in Babylon Revisited. It was here that I became acquainted with Fitzgerald for the first time aside from my failed attempt to read Tender is the Night. In the opening story, “The Ice Palace” the readers are immediately submerged in a scene where “the sunlight dripped over the house like golden paint over an art jar…” It’s a story where a woman gets lost in an ice palace while yelling out for a man whom she thinks she loves. It is tender and surreal and also sheds light on gender roles during the 1920’s. The language is also wondrous and odd; we are introduced to the protagonist Sally Carrol as she sits in her bedroom and “rest[s] her nineteen-year-old chin on a fifty-two-year-old sill.” What a terrific and efficient way to offer her age and give feeling to her house and surroundings.

Our first conversation was lively and informative. Lucas shared background information about Fitzgerald and especially on his relationship with his equally well-known wife, Zelda. Many of us were frustrated and confused when Sally Carrol is lost in the ice palace—where did her companion go? Is her character helpless or empowered? Is she unique or run of the mill? These were some of the questions we discussed and returned to as we were introduced to other female characters.

The following session we continued on with F. Scott’s short stories. Lucas reminded us to pay attention to themes and mirroring situations that would inform our understanding of The Great Gatsby. The story, “The Diamond as Big as the Ritz” is an epitomical example of Fitzgerald’s quintessential themes of excess and wealth. This over the top and sensuous tale almost feels allegorical in nature due to the scale and vastness of the story. There is a mountain-sized diamond and a palace. There is wealth-envy and strange ethereal women who are memorable and also shallow. The story is drenched in bizarre succulent imagery: “full in the light of the stars, an exquisite chateau rose from the borders of the lake, climbed the marble radiance half the height of an adjoining mountain, then melted in grace, in perfect symmetry.” I was impressed with the gorgeous language and my naive notion of Fitzgerald as a rational and relatively bland writer quickly subsided.

Finally, by the third week we were to come prepared with having read the first three chapters of The Great Gatsby. We got an ample taste of his work through his shorts and then we finally arrived at the biggie. Lucas shared with us that Fitzgerald died believing that nothing was to come of this novel. The Great Gatsby received mixed reviews at first, including some pretty scathing ones. I couldn’t help but think about this as 8 strangers sat in a room in 2014 pulling a part his sentences and analyzing his pages.

I was relieved that I actually liked the book. I was in awe of the craftsmanship of Fitzgerald’s sentences and the strangeness of his ideas. Over the course of the 6 weeks, I even found myself defending the book to people who didn’t like it. A friend made their point about the lack of plot, the stuck up characters, and the shallowness of it all. While I too have criticisms of the plot, I couldn’t help but point out the genius of the writing. The sadness and humanity in the characters despite their flaws—after all, all literature is about imperfect humans.

I don’t think that the book would have come to life in the same way if it were not for the input from the group, the probing questions, and especially the supplementary materials that were offered by Lucas and other members. Along side the reading, I had the chance to look at a thick, fanciful book filled with newspaper articles about Zelda and F. Scott, Zelda’s artwork, Fitzgerald’s correspondence with the public and other writers. Talking about a book, particularly a writer’s work I didn’t necessarily like, is key to understanding it and viewing it from different facets. The class wasn’t purely on The Great Gatsby or the short stories, but rather a collage of information that came together to form a kind of ideology specific to our group’s background and personal thoughts and beliefs.

I’m leaving this class with a greater understanding and appreciation for Fitzgerald. Am I a F. Scott intellectual? No, definitely not. I still have questions about the motives, hopes, and dreams of the troubled and sad characters. I still ponder how and why the book is so internationally famous. What is it about the characters and the story that stuck a cord in so many? I still wonder what the American dream looked like for Gatsby. What about for Nick? What about for Daisy? I’m grateful to have these questions and excited to continue an evolving correspondence with the Fitzgerald and my group. 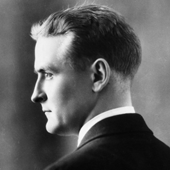