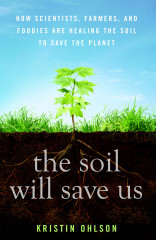 The Soil Will Save Us by Kristin Ohlson

Thousands of years of poor farming and ranching practices—and, especially, modern industrial agriculture—have led to the loss of up to 80 percent of carbon from the world’s soils. That carbon is now floating in the atmosphere, and even if we stopped using fossil fuels today, it would continue warming the planet. In The Soil Will Save Us!, journalist and bestselling author Kristin Ohlson makes an elegantly argued, passionate case for “our great green hope”—a way in which we can not only heal the land but also turn atmospheric carbon into beneficial soil carbon—and potentially reverse global warming.

As the granddaughter of farmers and the daughter of avid gardeners, Ohlson has long had an appreciation for the soil. A chance conversation with a local chef led her to the crossroads of science, farming, food, and environmentalism and the discovery of the only significant way to remove carbon dioxide from the air—an ecological approach that tends not only to plants and animals but also to the vast population of underground microorganisms that fix carbon in the soil. Ohlson introduces the visionaries—scientists, farmers, ranchers, and landscapers—who are figuring out in the lab and on the ground how to build healthy soil, which solves myriad problems: drought, erosion, air and water pollution, and food quality, as well as climate change. Her discoveries and vivid storytelling will revolutionize the way we think about our food, our landscapes, our plants, and our relationship to Earth.

Kristin Ohlson is a writer based in Portland, OR. Her work has appeared in the New York Times, Christian Science Monitor, Salon, Discover, and elsewhere. Her article about burning coal mines was collected in Best American Science Writing 2011. She is also the author of Stalking the Divine, which won the American Society of Journalists and Authors’ 2004 Best Nonfiction Book award, and coauthor of New York Times bestseller Kabul Beauty School.

Excerpt from The Soil Will Save Us:

Plot 87 of the Waterman Agricultural and Natural Resources Laboratory at Ohio State University used to be part of a farm. Pioneers chopped it out of the dense central Ohio forest in the 1800s. They raised corn, wheat, and oats for the horses; rye for making whiskey; flax, which they mixed with wool to make linsey-woolsey clothes for the men; apples, perhaps even a variety carried to Ohio by John “Johnny Appleseed” Chapman; and probably a dozen more crops. It was enough to feed themselves amply from the rich soil below, have some to share with neighbors, even sell to the occasional stranger. They picked arrowheads and stone beads from the soil, wondering about the ancient native peoples who had also flourished in the valley’s great fecundity.

The Watermans were the last to plow this land, and when the city and suburbs of Columbus closed in on their farm they decided to give it up to the university. Now only a few dozen acres remain, encircled by swaths of forest, which are in turn surrounded by the new urban canyons. Two unlike groups of moving objects, the nearby traffic and the hundreds of birds that swoop and survey the fields, make a cacophonous backdrop.

“The Soil Will Save Us is an important book and a pleasure to read. Ohlson, who has traveled the world to meet with innovative farmers, soil scientists, and environmental activists, writes her adventures while foregrounding her own vibrant personality.”

“The author has a clear storytelling style, which comes in handy when drawing this head-turning portrait of lowly dirt. But dirt—or soil, if you prefer—takes on character in Ohlson’s hands, and readers will soon become invested in its well-being, for soil is a planetary balancer, and from its goodness comes the food we eat.”

“The Soil Will Save Us is a good little book that provides optimism and ideas, both of which are badly needed.”