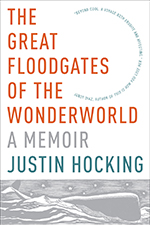 The Great Floodgates of the Wonderworld by Justin Hocking

Justin Hocking lands in New York hopeful but adrift—he’s jobless, unexpectedly overwhelmed and disoriented by the city, struggling with anxiety and obsession, and attempting to maintain a faltering long-distance relationship. As a man whose brand of therapy has always been motion, whether in a skate park or on a snow drift, Hocking needs an outlet for his restlessness. Then he spies his first New York surfer hauling a board to the subway, and it’s not long before he’s a member of the vibrant and passionate surfing community at Far Rockaway. But in the wake of a traumatic robbery incident, the dark undercurrents of his ocean-obsession pull him further and further out on his own night sea journey.

With Moby-Dick as a touchstone, and interspersed with interludes on everything from the history of surfing to Scientology’s naval ties to the environmental impact of the Iraq War,The Great Floodgates of the Wonderworld is a multifaceted and enduring modern odyssey from a memorable and whip-smart new literary voice.

Justin Hocking served as Executive Director of the Independent Publishing Resource Center (IPRC) from 2006–2014. He is the current Chairperson of the IPRC’s Certificate Program in Creative Writing, and a co-founder of the Wilderness Writing MFA at Eastern Oregon University. In 2014 he received the Willamette Writers Humanitarian Award for his creative and community-building work. Justin holds an MFA in Creative Writing from Colorado State University, and has participated in residencies at Sitka Center For Art and Ecology, and Signal Fire. He is the recipient of a 2015 Oregon Literary Fellowship and two Regional Arts and Culture Council Project Grant awards. He lives in Portland, Oregon.

Excerpt from The Great Floodgates of the Wonderworld:

Along with feelings, my problem’s also with language, the way I’m plagued by certain words, words that are like the whale lines that Melville says all men live entangled in, words that trigger the feelings in the first place: should’ve, would’ve, Karissa, never, failure, regret, future. The way the water out beyond the break at Montauk reflects symphonic patterns of sunlight—now like static snow on a TV screen; now like diamond buckshot up from below; now like a conflagration of tiny lightning birds; now concentrating into a single shimmering portal, yet all of these descriptions so completely failing the signified—helps me move past language’s breakwater, to drift out further, beyond words toward the ineffable, toward silence. Toward something like serenity as Asa and I skim across the wind-woven surface of the Atlantic.

“In this appealing memoir, the young author finds salvation from a dead-end Manhattan office job in an activity not often associated with New York City: surfing. . . . The passages about surfing and the relationships it fosters are filled with excitement and tenderness.  It’s hard not to cheer for [Hocking].

“With nearly pitch-perfect tone, Hocking impressively builds [Great Floodgates of the Wonderworld] around a series of tension-and-release vignettes that roll through the narrative like waves. . . . Hocking’s journey will prove relevant and immediate in its exploration of maturation and experiencing both spiritual collapse and, eventually, renewal.“

“Hocking doesn’t dwell on his misfortunes, or cast himself as the hero. Instead, Wonderworld focus on a more common, less headline-catching narrative: the small, lovely, but difficult, ways human beings heal in a world rife with mistakes and misjudgments, wrongdoing and despair. . . . [The Great Floodgates of the Wonderworld] is reflective and honest, with charm and just the right amount of innocence.”