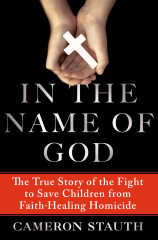 In the Name of God: The True Story of the Fight to Save Children from Faith-Healing Homicide by Cameron Stauth

An anonymous caller tells a detective in a small Oregon town that a woman has just bitten off a man’s finger. But the man is not the victim, the caller says. The woman is. She’s being held by a group of faith-healing fanatics who are trying to cure her depression with violent exorcisms. Then the detective gets an even more ominous message: Children in the church have been dying mysteriously for years, and now several more are in immediate peril.

The caller, a church insider, risks everything to work with detectives and prosecutors to stop faith-based child abuse, joined by a mother who’d suffered a faith-healing tragedy herself and dedicated her life to saving others from it. Masterfully written by Cameron Stauth, In the Name of God is the true story of the heroic mission that exposed the darkest secret of American fundamentalism, and the political deals that let thousands of children die at the hands of their own parents–legally.

Faith-healing abuse still continues around the country, but the victory in Oregon has lit the path to a better future, in which no child need die because of a parent’s beliefs.

Author or coauthor of twenty-five books, including several national and international bestsellers, Cameron Stauth has been hailed by The New York Times as “a tireless reporter and a talented and graceful writer.” Stauth has earned widespread critical acclaim for his narrative nonfiction, and his books have been published in ten languages and sixteen countries. He lives in Portland, Oregon, with his children, and is a member of the PEN American Center Freedom to Write Program.

Excerpt from In the Name of God

“Why do you want to talk to me?” I asked the man in mirrored sunglasses. He was trying not to be noticed, but the glasses weren’t helping with that on a day that was several gradations of gray outside and much darker in the bar. Even the rain was opaque, drifting down like falling ash. The place was called The Verdict and was across the street from the Clackamas County Courthouse, where the life of one of his best friends was being destroyed, mostly because of him.
“I don’t want to talk to you,” he said. “This will be the end of me.”
“The end, how?”
“I’ll lose everything. My wife. My family. My job. My friends. I may even go to hell.”
“Then why are you?”
“Because it will be the beginning, too. The omega and alpha.”
“So, some good will come from it?”
“Depends on what you call good.”
“But…”
“You’re trying to make sense of this. If you really want to understand it, don’t,” he said, softly and sadly.
I’d been around inscrutable oxymoronics ever since I’d moved to Oregon, without much to show for it, and this was beginning to feel too familiar. For the last nine months, I’d been trying to find a source within the ultra-secretive, radical-fundamentalist Followers of Christ Church, and I thought I’d finally found one. A highly placed official had told me that this man, an informant, was the most pivotal person in the recent series of arrests for child homicide within the church. But I didn’t know what to make of him. For all I knew, he was just another broken soul from that strange church who was trying to get even with people who’d hurt him.

“A journalist’s engrossing, at times gruesome account of faith-healing abuses within a little-known Christian fundamentalist church… Stauth’s novel-like narrative is compelling not just for the way it probes the complex, often contentious relationship between individuals of faith and secular institutions, but also for what it ultimately suggests about the need for limits on religious freedom.”

[starred review] “Stauth offers a dramatic account, broad enough to include historical perspective on the Great Awakening and the prophets and religious figures who shaped the faith-healing fundamentalists, and intimate enough to cover the families who struggled to reconcile love for their children with unyielding faith in their beliefs that dictated they take no action, other than prayer, to save their children’s lives. A powerful, shocking story.”

“Portland reporter Cameron Stauth interweaves two parallel narratives, both equally compelling….overall, In the Name of God is a highly nuanced story, presented by a reporter whose past books reveal his skepticism about the virtues of modern medicine and his openness to the mysterious power of prayer… As Stauth layers detail upon detail, the reader is left wondering how such close and devoted families could be so perversely willing to sacrifice their children for the sake of their beliefs.”