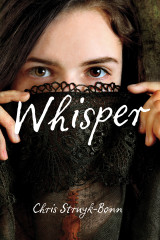 You will never go far in this world if you don’t know how to rescue yourself. Sixteen-year-old Whisper, who has a cleft palate, lives in an encampment with three other young rejects and their caregiver, Nathanael. They are outcasts from a society (in the not-too-distant future) that kills or abandons anyone with a physical or mental disability. Whisper’s mother visits once a year. When she dies, she leaves Whisper a violin, which Nathanael teaches her to play. Whisper’s father comes to claim her, and she becomes his house slave, her disfigurement hidden by a black veil. But when she proves rebellious, she is taken to the city to live with other rejects at a house called Purgatory Palace, where she has to make difficult decisions for herself and for her vulnerable friends.

Chris Struyk-Bonn has detassled corn, worked in a small motor-parts factory, framed pictures, served in various and sundry restaurants and labored in an egg factory. She is currently a high school English teacher in Portland, Oregon, and has at last found a job she thoroughly enjoys. Whisper is her first book.

I was quiet and still, like a leaf floating in the stream. The crayfish became accustomed to my clammy feet occupying the space beside their favorite rock, and they started to trust me. I could almost hear them, even beneath the water, as they crept across the bottom of the creek. Everything else became background noise–the screech of the crickets, the gurgle of the water, the rustle of rubbing leaves. Then I eased my hand through the water and grabbed them just behind the pinchers, swift and sure.

But that day, just as I was about to grab a crayfish with only one pincher, the warning call interrupted me, and I missed.

“Struyk-Bonn’s debut offers a darkly hopeful take on the universal themes of family and identity… The author’s vivid characterizations give this common trope urgency and nuance, and Whisper’s answer resonates with hard-won conviction. A thoughtful dystopian drama.”

“Raises some fascinating moral and geopolitical issues for class discussion….Whisper will enthrall, horrify, and anger young readers, but it should also give them a sense that they can create their own destinies.”

“A well-written novel with a compelling and likable cast of characters. The setting of the novel is never fully defined, but it has a modern post-apocalyptic feel to it….An engrossing read….Highly recommended.”