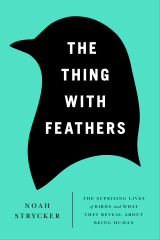 The Thing With Feathers by Noah Strycker

Birds are highly intelligent animals, yet their intelligence is dramatically different from our own and has been little understood. As scientists come to understand more about the secrets of bird life, they are unlocking fascinating insights into memory, game theory, and the nature of intelligence itself. The Thing with Feathers explores the astonishing homing abilities of pigeons, the good deeds of fairy-wrens, the influential flocking abilities of starlings, the deft artistry of bowerbirds, the extraordinary memories of nutcrackers, the lifelong loves of albatross, and other mysteries—revealing why birds do what they do, and offering a glimpse into our own nature. Drawing deep from personal experience, cutting-edge science, and colorful history, Noah Strycker spins captivating stories about the birds in our midst and reveals the startlingly intimate coexistence of birds and humans. With humor, style, and grace, he shows how our view of the world is often, and remarkably, through the experience of birds.

Noah Strycker, 28, is living an adventurous life of birds. He is Associate Editor of Birding magazine, former columnist known as “BirdBoy” in WildBird magazine, and frequent contributor to other bird-related publications. Noah’s articles have appeared in National Wildlife, Birder’s World, Bird Watcher’s Digest, Living Bird, Birds and Blooms, and Popular Birding, as well as several field guides, government documents, and other print media. His first book, Among Penguins, was released in 2011.

As a seasonal field researcher with birds, he has studied birds in Amazonian Ecuador, the Australian Outback, the Farallon Islands, Costa Rica, Panama, Fiji, Mexico, New Zealand, Antarctica, Hawaii, Alaska, Maine, California, Michigan, and Oregon, helped Taiwan design an ecotourism program, and searched for Ivory-billed Woodpeckers in Florida, in between birding trips. Noah’s “life list” is approaching 2,500 birds on six continents – one-fifth of all the world’s species. Noah graduated Magna Cum Laude, on full academic scholarship, from Oregon State University in 2008 with a degree in Fisheries and Wildlife, minoring in Fine Arts. He was named the American Birding Association’s “Young Birder of the Year” in 2004. He is also a competitive tennis player, and headed the Oregon State team at #1 singles for four years. Noah has completed five marathons, spent an accumulated four months backpacking wilderness areas of the Pacific Northwest, and recently walked 64 miles in one day. He hiked the entire 2,665-mile Pacific Crest Trail, from Mexico to Canada, in summer 2011. Strycker writes, lectures, and lives near Eugene, Oregon, between field seasons.

Excerpt from The Thing With Feathers:

On a recent birding trip, when I stopped at the remote outpost of Fields, in southeast Oregon, to grab a burger, I almost didn’t notice the pigeon in the parking lot. Fields is not much more than a store, an inn, and a stand of cottonwoods along an open-range highway in a zip code containing fewer than eighty residents. Several years ago, I watched an airplane land on the highway and taxi right up to the gas pump. The pilot had to be more careful of cows than cars. Fields doesn’t get much traffic.
The pigeon was quietly pecking around the pavement and scraps of tumbleweed just outside the station’s screen door, looking as though it maybe wanted to come inside. As I finished the last bites of my burger, something clicked. Here, a hundred miles from the nearest McDonald’s, any pigeon was a rarity.
“Hey, look, a pigeon!” I said.
Some other travelers also noticed it, and shooed the bird past the gas pump. It hardly moved until they walked right up to it.
“Seems pretty tame,” my dad and fellow birder said. “Wonder where it came from.”
“I bet we can find out,” I replied. “Check out the bands on its legs. I think it’s a racing pigeon.”
I had recently been researching homing behavior and my head was full of odd tales of transatlantic Manx shearwaters, a wonder dog named Bobbie, and a million-dollar pigeon race in South Africa. Now an actual racing pigeon had dropped out of the sky in the middle of nowhere, straight into my lunch break–a strange coincidence.

“In each chapter Strycker confidently takes an avian trait and then gradually connects it to the human world. This comes off not as anthropomorphism but as an acknowledgment of our essential kinship with other animals. Strycker has a keen eye for what is most interesting about each species, and he presents each bird story with tight language, humor and even an occasional splash of self-consciousness. For instance, he ends his lyric description of seeing the bowers this way: ‘I stood in quiet amazement: This was like watching a nature documentary on TV.’ Along with humor, this liveliness keeps us turning the pages, while swallowing the latest information about each species (including some good stuff on this past winter’s media superstar, the snowy owl).”

“Birding associate editor Strycker (Among Penguins: A Bird Man in Antarctica, 2011) backs up his claim that ‘[b]ird behavior offers a mirror in which we can reflect on human behavior.’ …A delightful book with broad appeal.”

“His work is a joy to read when he focuses on the interesting behavior of the birds with which he is obviously enamored, such as the astounding homing skills of pigeons, the uncanny talent of thousands of starlings to dart through the sky collectively without crashing into one another, or the ability of male bowerbirds to use sticks and brightly colored objects to assemble decorative structures that look like works of art. His prose is difficult to stop reading.”