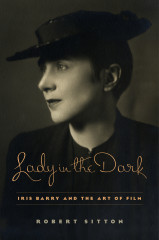 Lady In The Dark: Iris Barry and the Art of Film by Robert Sitton

Iris Barry (1895-1969) was a pivotal modern figure and one of the first intellectuals to treat film as an art form, appreciating its far-reaching, transformative power. Although she had the bearing of an aristocrat, she was the self-educated daughter of a brass founder and a palm-reader from the Isle of Man. An aspiring poet, Barry attracted the attention of Ezra Pound and joined a demimonde of Bloomsbury figures, including Ford Maddox Ford, T. S. Eliot, Arthur Waley, Edith Sitwell, and William Butler Yeats. She fell in love with Pound’s eccentric fellow Vorticist, Wyndham Lewis, and had two children by him.

In London, Barry pursued a career as a novelist, biographer, and critic of motion pictures. In America, she joined the modernist Askew Salon, where she met Alfred Barr, director of the new Museum of Modern Art. There she founded the museum’s film department and became its first curator, assuring film’s critical legitimacy. She convinced powerful Hollywood figures to submit their work for exhibition, creating a new respect for film and prompting the founding of the International Federation of Film Archives.

Barry continued to augment MoMA’s film library until World War II, when she joined the Office of Strategic Services to develop pro-American films with Orson Welles, Walt Disney, John Huston, and Frank Capra. Yet despite her patriotic efforts, Barry’s “foreignness” and association with such filmmakers as Luis Buñuel made her the target of an anticommunist witch hunt. She eventually left for France and died in obscurity. Drawing on letters, memorabilia, and other documentary sources, Robert Sitton reconstructs Barry’s phenomenal life and work while recasting the political involvement of artistic institutions in the twentieth century.

Robert Sitton is adjunct professor of media and culture at Marylhurst University in Portland, Oregon. He received his Ph.D. in philosophy from Duke University and worked on the cultural news staff of the New York Times, as director of film education for the Lincoln Center for the Performing Arts, and, in the 1970s, developed the Northwest Film Study Center of the Portland Art Museum, fashioned after Iris Barry’s collection at the Museum of Modern Art.

Excerpt from Lady in the Dark

When Abbott turned the podium over to his wife, the film library’s new curator, few in the crowd could have known that the speaker was an established writer whose poems had appeared in the pages of Poetry and other prestigious magazines, attracting the attention of Ezra Pound and luminaries of the post-World War I British avant-garde. They did not know she had lived in Bloomsbury among artists and writers such as T.S. Eliot, William Butler Yeats, Wyndham Lewis, and Ford Madox Ford, or that she was the mother of two children born out of wedlock with the eccentric Mr. Lewis. They did not know of her pioneering work as a film critic for the Spectator, or that she cofounded the influential London Film Society in 1925.

The crowd at Pickfair did no know these things because polite society did not inquire about them. Women were not expected to be powerful or to lead influential professional lives, and matters of maternity were considered strictly personal. Barry was skilled at keeping her past to herself and minding her appearance. With her clipped British accent and sensible attire, she easily could have passed for an Oxford graduate from the upper social echelons. Who would have guessed she was a convent-school dropout born in a farming outpost of Birmingham, daughter of the noted Madame Pandora, gypsy seer from the Isle of Man?

Looking splendid in paisley silk, her dark eyebrows arched and brown hair neatly coiffed and fashionable short, Barry won over most of the stars and studio moguls that night. She appealed to their desire for immortality, telling them how regrettable it would be if future generations knew nothing of their cinematic achievements. She was prepared to rescue them from this fate, if only they would lend her their films.

[starred review] “The most fascinating characters tend to be the unsung heroes of their field, and there may be no greater example of this than Iris Barry…. This remarkable story is richly detailed… and is required reading for anyone interested in film, art, or museums.”

“Meticulously researched, lovingly written…. Lady in the Dark: Iris Barry and the Art of Film is a must-read biography.”