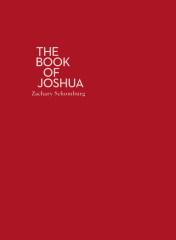 The Book of Joshua by Zachary Schomburg

The Book of Joshua is a singular narrative bildungsroman told in a series of prose poems that span an entirety of a life (1977 – 2044) told from the perspective of the unnamed main character. The narrative is divided into three sections: Earth, Mars, and Blood. The long poem, Blood, was recorded with Kyle Morton, of Typhoon, and can be listened to over at Black Cake Records.

Excerpt from The Book of Joshua

In the beginning, no one was around. No one
made my bed and no one left any tools and no one
taught me how to swom or how to get back to sleep
when I woke up and no one rocked me to sleep
and no one told me the plan. No one told me what
to do with my legs. No one told me how to open
my hands. The birds waited quietly in the tree. My
fingers unfolded on their own like tiny blue swans.

“With wit, humor, tenderness, and his characteristic, logic-bending surrealism, Schomburg (Fjords, vol. I) probes into the subjects of futurity, personal history, and mythmaking.”

“The Book of Joshua … ultimately spins its own myths in a book that is built to feel symbolic, but isn’t really a straightforward metaphor for anything because, within the context of this world, these statements are literal. It’s not allegory but finely figured dream.”

“The feat of The Book of Joshua is to create a world by repetition: images become motifs, then symbols, and finally, reality… Schomburg captures the eventuality of a life and of all life: It’s birth and rebirth, all leaving one moment for the next.”