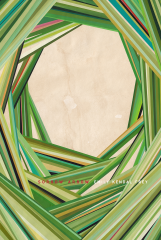 Sorrow Arrow introduces us to a speaker that’s wry and full of swagger, but vulnerable too and fighting for a way to optimally interact with her surroundings. Youth-haunted, love-haunted, body-haunted and death-freaked, she engages the world (and her reader) as if fixed behind a thick pane of glass.

My relationship to the unknown is in peril

A field of baking elephant shit

Tiny computers are breaking into the clouds

Arrows are raining down

In line for breakfast I fuck the ground

I get inside the mail box and bang around

The more you know

You want the boy/girl splayed on the runway

The berry in your pocket melts

Hold still to let it bleed down your leg

“She writes of fear, grief and sorrow in a straightforward and fearless way, and explores dark emotions head-on… There is something about the way Frey writes that is powerful, skimming the surface of pessimism but never quite falling into the depths, striking out with a precision that is cut-throat and calm, flailing wild and pinpoint, letting line upon line pile up against each other like firewood. Her poems read as notebook entries or collage-works, and what makes her poems so powerful is in the way she manages to pack so much into short phrase-lines, each one as forceful as a physical blow.”

“Frey excels at crassness, bluntness, concision. She’s simple in her language, straightforward and unabashed and genuine in conveying her speaker’s hate and love (and she operates almost exclusively at these spectrum ends—nothing is dull, nothing is hesitant. Everything gives off the illusion of certainness even if you as the reader are being tricked.). One line slaps the face red—the next socks you in the gut.”