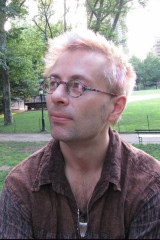 A. Molotkov is a writer, composer, filmmaker, and visual artist based in Portland. His book, The Catalog of Broken Things, is forthcoming from Airlie Press in 2016.

Stories – human stories, real or imaginary – conversations, books, films, dreams. Many artists are compelled by the natural world – I find it engaging, a good metaphor for the human existence. But ultimately, it’s the human project I’m interested in – the collective knowledge, wisdom, and progress (however relative) that our species brings to the world, and the many challenges we face in living elegantly and respectfully.

It’s sporadic. I tend to jump around between fiction, poetry, and non-literary tasks. When I had a small child and too much work all the time, I found that my responsibilities as a writer began eluding me. I then committed to spending at least an hour a day on my art. I have increased this minimum since. This daily commitment helps avoid hesitation, and assures that the true pursuit of my life is receiving attention while I struggle to pay the bills and take care of other logistical needs – the stuff I think of as maintenance.

Knowing I am not completely deluded hoping that my work may be relevant to the occasional reader. The monetary award, too, is extremely helpful in a writer’s life.

In December, I completed a novel The Escaping Truth, for which I am currently seeking representation. The protagonist, Jim, is an insecure, damaged young man without an occupation.  As he wanders the neighborhood, a beautifully lit porch attracts his attention, and he finds himself on it, observing the neighborhood. So begins his affair with other people’s porches. His visits lead to a series of unexpected encounters that enlarge Jim’s frame of reference through access to the stories of others, allowing him to acknowledge his own trauma and to begin his recovery. Among Jim’s new friends are Omar and Mariama, a Senegalese couple, and Rose, a cynical retiree. Some home owners meet Jim with a kind word, others with a shotgun. A potential love interest, the Stranger withholds her name, demanding participation in the porch adventure. As Jim’s relationships unfold, he learns of troubles between Omar and Mariama around the issue of her genital mutilation, and about Rose’s childhood in an abusive family, among other painful and meaningful stories. Jim is overwhelmed by the tragedies of others, obsessed with figuring out the logic behind the world’s incompleteness.

I’ve had the opportunity to review the novel with my writers’ group, The Guttery, and have spent the last 2.5 years on its six drafts. Of course, I’m always working on a batch of poems. In the recent year, I’ve been tired of my so-called poetic voice, trying to augment it with different modes and approaches. Currently, with The Guttery’s help, I’m revising some of my short stories – and gathering steam on a new novel about a San Francisco chemist, Ruth, witnessing an accident. The victim, Ulrike, contributes a second POV and storyline, which transpires in the months preceding the accident. By contrasting Ulrike’s childhood in Dresden and Ruth’s healthier past, their attitudes to friends and lovers, their relative degrees of success, I’m hoping to explore the defining edges of identity, while letting the characters’ stories set up an emotional context.

Join a writers’ group and work on your craft. In the meantime, keep applying every year.

In kaleidoscopically-shifting second-person prose poems filled with startling elisions and compelling juxtapositions, A. Molotkov interrogates the false binaries between the quotidian and the strange, the monotonous and the surreal, dreaming and waking, and being and not-being. Molotkov creates riveting imagery with clean, simple lines such as “Your husband is walking toward you across the vast distance. His figure is tiny, but his enormous shining eyes are like moons over the spare landscape.” Following the same loose format in each prose poem, these cumulative pieces create both a polyvocal and palimpsestic effect—a familiar narrative in the midst of a labyrinthine dream logic revealing multiple permutations and slyly challenging the reader with profound ontological questions.

At night, when the world outside is quiet, I hear the little wheels turning. My neighbor explained how to tell this sound from any other. He died. He had a bad heart. When I hear this sound I know they will get to me. But they have other stuff to do first. They keep turning and turning.

Sometimes it’s cold in winter. But I bought myself a warm coat, and I’m not afraid. I don’t go outside too often. My legs hurt.

My neighbor was squeamish. He used to say: “Yuck, it’s snowing. How disgusting!” I’d ask him: “Why disgusting?” But he didn’t reply. He died. He had a bad heart.

My wife left me. Or I left her. I don’t remember for sure. She was soft. Soft and white. Sometimes I see her in my dreams. I’d like to wake up, but I can’t. I’m afraid of dreams.

The neighbor said that after the winter comes the summer. I don’t remember for sure. But I guess it’s true. He never lied. If he drops by I’ll ask him about the summer.

I used to have friends. Then something happened to them. I don’t remember them too well. They don’t come to visit. I guess they find me boring. The neighbor didn’t. But he died.

Tomorrow’s New Year’s Eve. I bought a bottle of champagne. I would invite the neighbor as well, but he died.

My wife visited a few times. It was long ago, I don’t remember too well. She felt sorry for me. Everybody does. Only the neighbor never did. He was strange.

The neighbor said that if it snows on New Year’s Eve, the year will be happy. I don’t know. I guess I’m happy as it is. But still, I want it to snow.

I like pictures on the walls. I cut them out of magazines. They are beautiful. The neighbor said that I just waste the magazines. But I don’t think it is waste.

Little doggies live with me. But they don’t stay all the time. They come and go. Five or six of them. I feed them bologna. The neighbor scolded me for that. He said there were no doggies. But I keep feeding them.

Someone looks into my window at night. He has a beard. The neighbor says these are dreams. But I know they are not dreams.

I feel sorry for the neighbor. He died. Now I have no one to talk to. Nobody visits. When I’m thirsty I have tea, or milk. I like cookies with my milk.