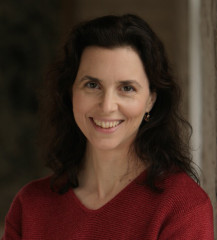 Christine Fletcher is a veterinarian and author of two young adult novels: Ten Cents a Dance, which was named a 2009 Top Ten Book for Young Adults by the American Library Association, and Tallulah Falls, which was named a 2007 Book for the Teen Age by the New York Public Library. She currently writes and practices veterinary medicine in Portland, Oregon.

Stories are always inspiring to me. A well-crafted, well-told story, in any form, is immensely satisfying. It makes me impatient to get back to my own work. I also find a lot of inspiration in history, especially the forgotten bits that don’t make the history books. So many people broke society’s rules and quietly made their own instead. Some of those people, not so quiet. I love that.

I’m a creature of habit, so keeping a routine is really important for me. I write five days a week. My day job gets the other two. I’m very protective of my writing time. Don’t ask me to run an errand or answer the phone during my writing hours, or you’ll get stinkeye. I’m also a perfectionist, and I’ve had to work hard to let go of that in my writing, to let the words come even when they seem stunted and drooling and covered in warts. It’s a struggle, but I’m getting better at it.

Validation. So many times this past year I’d convinced myself nobody will ever want this manuscript, that it’s too out there, too unclassifiable, too weird. But the story has its hooks in me; for better or worse, I’ve got to finish it. And then to have someone step up and say, “This is good. This deserves support,” – I mean, the money is wonderful, but that vote of confidence lends a support that goes far beyond dollars.

A young adult novel set in an alternate American history, circa 1888. Loyalty and broken trust, war machines, orbs of death, the legacy of an infamous parent. Too early to share a lot of details, so I’ll stop there.

Storytelling is a skill. Learn that skill. So many people focus on beautiful writing and they have no idea how to tell a story. Don’t waste time polishing your commas until you’ve written the best story you possibly can. Then submit that. No matter what, keep working. Writing rewards the persistent even more than it does the talented. Believe me, I know.

Christine Fletcher’s The Bone Reaper is an impressive undertaking. Set in a re-imagined 1880s America with a steampunk element, it’s told from the point of view of a freed teenage slave named Iz. Separated from her parents who escaped slavery when Iz was still a baby, Iz has set out on a seemingly impossible journey to find them. Starving and alone, yet brave and determined, Iz endures through wit and sheer determination. Fletcher has captured a strong voice in Iz, who has a unique and visceral way of describing what she sees and feels. “During the night’s walk, the empty had oozed through me til I felt hollow to my toetips.” Having never known love, there is still something buried deep in Iz’s heart that guides her toward the possibility of family, despite the odds. With Iz’s achingly innocent yet strong voice and the introduction to original (and possibly sinister) secondary characters, Fletcher draws the reader in from page one and doesn’t let you go.

from Chapter 1 of manuscript in progress

First thing I saw, come dawn, was a Bone Reaper. A little ways off the road, tilted crazy in the middle of a farmyard. Turrets sunk in dirt and jessamine vines, one flank jutted high in the chill air. Those dark patches there likely rust. Could be old blood.

I wasn’t scared. This Reaper like all the others I’d seen in the five years since war’s end. Dead, the steam and oil that was its blood long since run into the ground. Anyway, even when the Reapers lived, wasn’t us ran screaming from their guns and blades flashing and their crushing spiked wheels. Wasn’t us they’d come south to kill.

Beyond the Reaper stood the farmhouse. Hard to see in the dim; but seemed like a tail of smoke rose from its chimney. Seemed like a whiff of bacon in the air. Might’ve been my stomach dreaming. During the night’s walk, the empty had oozed through me til I felt hollow to my toetips.

If this was a colored folks’ cabin—or even a grand white folks’ place, with front columns and two chimneys and a back porch where I could talk to their colored cook—I’d already be knocking. Asking could they spare a mouthful in swap for a morning’s work. Didn’t have to be bacon. Heel of bread all right with me. Crumbs, even.

But a plain farmhouse like this, could be all I’d get was a mean dog turned loose on me. I’d learned that the rough way. And I hadn’t strength enough left in me to run.

Then again, did I not get something to eat, I’d have no strength even to walk. Might as well lay down in the black shadow of this Reaper and let come what may.

No. I wasn’t ready for that. Not yet.

I walked past the Reaper through the farmhouse yard. Slow, and not particular quiet; if the place had dogs, best to know sooner. Heard nothing but a horse’s rumble from the barn and snuffle of hogs from their pen. Came round the back of the house and still not a whimper. Nor any voices, neither. Just a single lantern’s glow through a window drape. From the doorstep, a ginger cat slit its yellow eyes at me.

“You walk a month in spring mud, see what you look like,” I told it. I slapped what dirt I could off my boy’s shirt and trews. Nothing to do about the patches, nor the tear across one knee, nor the sole coming loose on my right shoe. I raised my knuckles to the door.

About to knock again when it opened. White woman with flour dusted up her arms and eyes like two burnt raisins sunk in dough. Soon as she saw me, door swung shut again.

“We don’t abide darky trash round here,” she said shrill through the last bit of crack. “Get gone! Or I’ll call my men, and you’ll wish I hadn’t.”

Door clacked tight. Cat hissed as I passed it by. And then, away beyond the Bone Reaper, I saw a pair of wooden doors set low in a hillside. A tater cellar. There’d be apples. A ham, even.

I felt for the tiny wheels on their string round my neck. Brass lace in my hand, Mam’s words in my ears. You got to live. Get to that world where he gone. Find him.

I took a breath. And ran for the cellar.